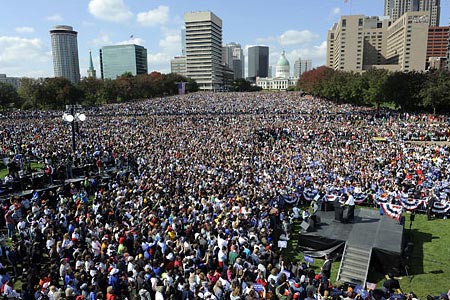 We’re not in the habit of indulging ourselves with optimism, but whatever happens in the next two weeks, the sight of a hundred thousand people cheering on a man who isn’t (a) throwing a football, (b) driving a racecar, or (c) inciting them to invade France, does tend to weaken our cynical resolve.

It also does not hurt that Black Unicorn raised $150 Mil +. Meanwhile Juan raised $66 mil (a good haul in a normal election year, but not this year) and can not spend more than $84 Mil thanks to public spending guidelines.

A combination of Obama’s organizational savvy and Dean’s 50 state strategy has put old PG on the defensive in the worst way. Even the 527s Juan relies on can’t make a serious dent.

Damn libruhl media probably photoshopped them crowds in there for that Ay-rab.

This just must must must be seen, apparently, the first dude is a klansman, a full on troglodyte, everything evil, anything bad, its him, check out his sign: http://minnesotaindependent.com/13461/first-dude-and-absent-sarah-upstage-norm-at-duluth-sportsmen-for-coleman-rally

This picture totally made me all teary. I’m such a sucker for shit like that.

@Prommie: I think this ends the hate fucking fantasies.

St. Louis police categorically deny that the crowd was anything more than 90,000.

@Prommie: Dear FSM. The way the Palins are acting, McCain should be terrified of winning — they’ll dispatch PG in a nanosecond and set in motion their End of Days scenario. On the upside, noticed these two headlines in the sidebar:
# Bachmann’s “anti-American” remarks prompt write-in candidacy of GOP’s Immelman
# Tinklenberg: We raised $438,000 since 3 p.m. Friday

TJ: I just accidentally clicked my way to CP, trying to come here, and ohmygosh, they seem to have gone in for a theme of heavy use of really terrible, awful, in idea and execution, photoshop stuff now. I guess that must be part of the research data, the lurkers needed some really bad photoshop jokes so that they would feel confortable making dumb comments.

Of course, your local neighborhood freepers will be going off on how this was actually East St. Louis crossing the river. How Black Eagle drew 75k in Kansas City is unexplained. (“Damn Topekans,” perhaps?)

@Prommie: Plus they don’t seem to have circulated that memo about needing to proofread posts before they go live.

The silent majority is obvs still there, and still silent.

“At the same sit-down interview in September, (Jerome Block Jr., a candidate for the New Mexico Public Regulatory Commission), lied about what has become his most scorching campaign controversy. He had given $2,500 to longtime friend Paul Maez, the San Miguel County clerk, , claiming the money was for Maez’s band to perform at a campaign rally. The rally purportedly occurred in May, but the expenditure was recorded in June,, and Block Jr. last month admitted there was no such performance.

In the interview, Block said 75 to 100 people attended the rally. In a later phone interview, he said four or five musicians were on stage.

The matter involves public campaign money and is now being investigated by the state Attorney General’s Office, which is deciding whether to launch a criminal investigation.*

The incident helped cause top Democrats to distance themselves from Block Jr. Gov. Bill Richardson, Lt. Gov. Diane Denish, U.S. Rep. Tom Udall and PRC member Ben Ray Luján**, who is running for Congress, have either declined to say if they will endorse Block Jr. or said they will not endorse anyone.

****
The payoff to the county clerk is significant because Block was barely the top vote getter in a crowded field of six in the June primary. Who counts votes locally? The county clerk.

* The families of both the AG (son of former governor, got his ass kicked by Richardson in his own run) and the PRC candidate are close long-time political allies, however.

** The “not gay” son of the Speaker of the NM House who was outed by my candidate in the primary.

On the other hand, speaking of germans, the reason they are not there at the Sain’t Louis rally for Obama, is because they go in more for the Palin hatefests, when they are not formed into their Brownshirt intimidation squads, from North Carolina, I read a report this morning of voter intimidation by republicans, harassing early voters, and then there is this, 30 slashed tires of cars belonging to people at an Obama rally.
http://tpmelectioncentral.talkingpointsmemo.com/2008/10/obama_supporters_tires_slashed.php

There will be blood, I tells ya, the pigfuckers are angry and frustrated about things they do not understand, and the only thing they know to do when their brain gets froze up like this is shoot something or blow it up, one.

@rptrcub: My mom called him “Tingleberry” the other day on the phone to me.

BTW, in re “moving to Australia”: I don’t see the wingnuts relocating there. For one, they can’t spell it, and two, the Australian Labor Party is in charge.

BTW, I’m being forced to go to a Ben Stein lecture against my will. Pray that I don’t go batshit on the douchenozzle. I don’t give a flying fuck if he’s part of American pop culture. He is the handmaiden of Nixon and Douchebaggia Inc., a subsidiary of the Republican National Committee.

@rptrcub:
Part of me wishes that “Win Ben Stein’s Money” was still on so that one Obamaican can whip his ass and then tell him that’s donating the money in his name to the Demrats, ACLU or Pro-Evolution Lobby Group just to see him go all batshit.

@rptrcub: Do a tally of “Bueller?” calls for us and if none, start one?

@rptrcub: Yell “Get the Red Out!”. Read: “From Remedy Hawker to Pundit: The Uniquely American Journey of Ben Stein.”

@ManchuCandidate: I think it says something about me that I know Ben Stein better from the game show than the movie.

No, strike that — these days, it’s the commercials. Which tend to disqualify anything else he has to say.

But without casting aspersions, that’s one reason I tend not to do political Photoshopping: Everybody else does. Although I’ll make exceptions for inspiration.

@nojo:
The role in Ferris Bueller’s Day Off was his only role. Everything else since then has been a riff on it. Talk about type casting.

Aside Ben Stein’s politics, I didn’t mind the game show.

Do ya think being a conservative intellectual may be kinda like playing pop-warner football, only doing when you are say 25 years old, and the rest of the players are all 10? Is that why so many of them, like Stein, come to vastly overrate themselves and develop their smugness to such enormous proportions?

@Prommie:
Of course. In the land of the stupid, the half wit is king.

@ManchuCandidate: @nabisco: @Prommie: @redmanlaw: Stein was actually not as bad as I thought he would be, and he did take his shots at the current state of the GOP, the bailout, Wall Street, et. al. The whole “you are not the center of the universe” stuff I kinda agreed with. On the whole, he seem resigned to the fact that “this fall, the United States will elect the first African-American president.” And he didn’t lose bowel control at the thought of President Unicorn, though Stein didn’t outright endorse him.

And on Israel, he even said that he trusted Obama/Biden to be strong supporters. So… I’m sure the Freepers will probably pile on him, too.

Left before he could start doing the “Bueller… Bueller…” bit.

@rptrcub: Lots of them are suddenly saying nice things about democrats, cub, lots of them. Its like the way Italians deal with war. As explained by the dirty old man in the brothel in Catch-22.

@Prommie: Perhaps it’s atonement for all the crazies the Maverick McWalnuts/Sister Glossolalia campaign has unleashed on the country. Including good ol’ fashioned voter intimidation and taunting, as reported by the Washington Moonbatshitcrazy Fucking Times!

@Prommie: Also, the AP has a good graphic of what forms of voter intimidation to expect, including broken polling machines where the repairman is sitting on his ass and apparently drinking SoCo or Jack Daniels.

@rptrcub: If he’s drinking Rockstar, you’ll know he’s being paid by the nutjobs (aka Michael Savage).

@rptrcub: He is indeed all those things (Ben Stein, not Prommie), but did you SEE him excoriate the Republican party via Mizz Palin? It was a little bit full of win.

You people lay off the Germans. I done tole ya before. Or at least don’t get German Citizens confused with Pigfucking American Hillbillies.

@IanJ: True, Germans pretty much stop when told to. But ya gotta admit, as tourists they are possibly worse than PFAHs. Can I get a witness RomeGirl?

@nabisco: Germans pretty much stop when told to.
Tell that to the French. Or the Polish. I could go on.
And I’ll back you up on the German tourists — only the Russians and Americans are as bad.

@Mistress Cynica: My Czech forebears hit me upside the head after I wrote that.

The McCain campaign is looking at an Electoral College strategy heading into the final two weeks that has virtually no room for error and depends heavily on a dramatic comeback in Pennsylvania, which hasn’t backed a Republican for president in 20 years.

While Iowa, New Mexico and Colorado are still officially listed as McCain target states, two top strategists and advisers tell CNN that the situation in those states looks increasingly bleak. Iowa and New Mexico always have been viewed as difficult races, but the similar assessment of Colorado reflects a dramatic shift for a campaign that had long counted on the state.

“Gone,” was the word one top McCain insider used to describe those three states.

@Dodgerblue: I won’t put PA in the W column for Barry until the last ballot is counted. However, any campaigning east of the Monongahela next week will be tuned out by rabid Phillies fans.

The Governor will probably get face time on national teevee during the home series, and don’t be surprised if Plugz shows up sitting next to Rendell at one of the games.

I’m rooting for the Rays. I’m really sick of the Phillies.