Stinque
Home Latest Comments Log in
If it smells, we’re on it.
Stinque
Assholes, they do vex us.
Stinque Personals

Sorry About Those Third Degree Burns! 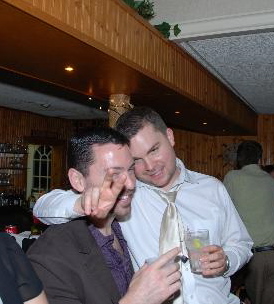 After many drinks, but before the 'Living On A Prayer' incident

So, in case the Earth split open and belched out some sulfurous hellfire around where you live this weekend, or if you were caught wrestling with some fire-breathing wolf demon summoned from the 7th circle around, oh, say 11:15 am CST on Saturday, that would be my fault.  Oopsie!!!  You see my father was married around that time, in a god damned CATHOLIC church, and your very own homofascist read scripture.  Out loud.  To churchy people.  It was, needless to say, my first time which is a line I am not able to use often.  Besides getting my ass kicked at work, I have spent the last three weeks trying to pronounce the word ‘Colossians’ correctly on the first try.  You have no idea.

Not as lucky was my brother, who was stuck leading the ‘Lord hear our prayer’ portion of the service.  The priest (who at no time tried to suck my cock, although I am into that kind of thing and I don’t really think they like it when the other party is willing) snuck in the part about praying for the president, and the government, and the motherfucking ECONOMY even though it was supposed to be cut at the request of the groom (thanks Dad!).  This prompted me to turn around and give Mr. HF, who was sitting behind my very conservative extended family, the eye roll of all eye rolls.  Let’s just say that it is a good thing HF was not given that part to read, or the assembled mass would have also been praying for the thousands of innocent Iraqis slaughtered by our blood thirsty leaders.  Damn, I wish my brother could improvise faster.

My uncle did approach me at the luncheon afterwards to tell me that the Christian thing to do is to pray for your enemies, to which I say bullshit.  We eventually agreed* that my praying for the war crimes trial was going to be about as close to Christian compassion as I get.

So whatever y’all did to stem the tide of molten lava intended to take us all towards eternal damnation, I must say thanks (although has anyone heard from Florida recently?)  I will try to warn you next time.

*may not have happened.

And you didn’t burst into flames?Amazing …

The one good thing about Catholic weddings: There’s always liquor at the reception. Cute pic, btw.

I demand to hear about the “Living on a Prayer” incident.

SanFranLefty: Yes. Me too.

(And sorry for jumping your post. Stanley Kurtz needed a beating. I gave him one.)

Your epic eye roll reminds me of my entire family’s row audibly groaning when my pompous crazy psychiatrist uncle started my grandmother’s eulogy with, “In my medical practice…”

I thought I was feeling especially sinful at that exact moment this weekend. I went with it. And that’s all I’m sayin’.

@Mistress Cynica: No shit! You’re not allowed to complain about Christian weddings until you’ve been to a few evangelical DRY ones. Like, completely dry–not even champagne. And for two of these (my sister’s and a college friend’s), I was also stuck in a fucking bridesmaid dress! That should just not even be legal. You have no idea.

@HF: You and the mister are nauseatingly cute, obvs. I second SFL’s demand for the Madonna story.

Aw, that pic is adorable! Congrats to your dad, and to you for making it through the jesusry intact and unmolested! Well, unmolested by priests, anyway.

@flippin eck: @Mistress Cynica: Not just a Catholic wedding with booze, but a before-noon wedding that still had a full bar (judging by what is in HF’s glass there). Now that is impressive!

Hooray! Praying for the President reminds me of a neighborhood Fourth of July party I attended a few years ago. My mother was the president of the civic association, and she was so proud that her Navy Vet daughter was there. She announced to the crowd that they had postcards for everyone to fill out to send to the troops in Iraq. I announced that I would like to send some cards of condolence to the Iraqi families who lost innocent loved ones in the war. I haven’t been invited back.

Yes HF, I was burned up here by molten lava. Covered in 2nd and 3rd degree burns, but I got better ;->

Congrats to your father.

@flippin eck: No, that’s “Like a Prayer”, HF is talking about hair metal masters BON JOVI, thanks to Rockband2 I’ve now heard that song more times than in the 80’s.
Also, dry wedding what the hell? Do they want everyone to hate each other? Maybe they were concerned nobody would be crying.

@flippin eck:
A wedding without booze is like a month without a Republican Sex scandal. Just wrong.

OMG, look at those cheeks! I want to pinch them like a maiden aunt!

Such a pretty boy….

@drinkyclown: Oops, I knew that I just didn’t recheck the caption in my rush to whine about dry weddings. They are a very special form of torture. I just tallied in my head and between friends from (Christian) college and RW family, I’ve been to at least 5. My god the horrors I’ve seen. At the last one, my cousin’s wedding, I announced to the entire table of respective rellies that I this was my last dry wedding ever and they shouldn’t bother inviting me to another.

I went to a friend’s wedding in Kenya (she’s of Indian descent), and the wedding lasted a week. A full-blown week of food and dancing and the Mendhi and booze, booze and more booze. I’d wake up drunk, and it would all start over again.

@JNOV: Oh man that sounds like sooo much fun! That is how you do it right, with a week-long party. All the weddings I’ve been to, everyone was eager to get the formalities over with as soon as possible so the partying could begin.

@Tommmcatt Yet Again: Um, which cheeks would those be?

The ‘Living On A Prayer’ incident is best told over cocktails, so flippin’ and CB should get a chance tomorrow night (and yes, it is the Bon Jovi version). For the rest, just imagine – you are in small town central Illinois, there are about a dozen drunken thirtysomethings on the dance floor, inhibitions are lowered, and the band busts out with ‘Living On A Prayer’. And then follows with ‘Pour Some Sugar On Me’. Whatever you are thinking in probably accurate.

@homofascist: Reading between the lines, I take that to mean that your “not-gay” corn-fed husbands of your cousins from Misourah or downstate don’t mind bumping and grinding with Mr. & Mr. HF on the dance floor?

I have plans for both sets, actually.

@SanFranLefty: Nothing quite that salacious. The mister and I actually slow danced together, which was enough for some, believe me.

@flippin eck: One of my cousins married a Baptist and they had a dry wedding. Fortunately, men in my family tend to get monogrammed hip flasks for their 18th birthdays, so our side of the family got louder and louder and drunker and drunker, to the Baptists’ confusion and consternation. (women in the family have been know to use purse-size perfume bottles to hold a quick snort.)

@homofascist: So, were you finally actually able to say it without adding the “t” ?

@Mistress Cynica: I was a guest of honor (read: “token gringo”) at a wedding in C.A. once. They were evangelicos with nary a drop. Fortunately, I knew a family two doorstops away who fetched me for periodic cerveza and guaro shots. Three hours into the “dry” social, my host mother was concerned that I looked a bit “palido” and sent for the local pharmacist who plied me with over-the-counter uppers. It was teh awesome…

homofascist: I have been at a Midwestern wedding where “Strokin'” was played. Seventy-year-old white people attempting to dance to same. Soon thereafter, “Baby Got Back.” Profoundly disturbing.

Felicidades, Generalissimo HF, and congrats on not bursting into flame.

I felt the negative vibes were coalescing this weekend, so I left central IL and went to Chicago for the weekend. So there was a balance in universe and no geological cataclysm. You were in swine-copulating, McCain -Palin yard signs everywhere country , and I left it.

At my niece’s wedding a couple of years back in the suburbs ( Plainfield) I tried to get my brother to dance with his BF, but he kept demurring. I threatened several times to dance with him, which would have stirred a turd with my spouse (which is already a shitty relationship). My elderly mother was agitated about some other family stuff, so I didn’t feel I should add to it. Weddings are such great events for family happiness or mayhem. Everyone in my family is Catholic except for the “prick”.

dry wedding? i’ve never heard of such a thing in my life. obviously i’m going to the right parties.
the only reason i can think of is, the bar tab is always the biggest expence at an affair. trust me, i’ve made a few. cheap bastards. they expect a gift?
i expect a martini.

@AARPrick: Then there was my brother’s wedding, at which my mother (who had induced an allergic reaction earlier in the day to get attention) refused to speak to me, have me in the family photos, or let me sit with the family. Especially awkward as she and I were the only two members of our family present. My poor brother had two friends, one assigned to each of us, to keep us apart. The bride’s relatives from NOLA were appalled when the bars closed at 1:45 AM.

@AARPrick: Where are you in central IL?

I live just above the IL Mason Dixon – KKK- mouthbreathin’, bottom-feedin, sister-dating line (I-70) but below I-80 amongst the barbarian tribes in F’ing-ham

@AARPrick: I love Teutopolis this time of year!

I am from D.Vegas myself, on the border of Hoosier land.

Holy fucking shit!!! Did your father get married in T-Town? If so, how in the world did you and Mr. HF walk out alive?

@AARPrick: No, Bloomington. I just love the town name Teutopolis. The party was back in D.Vegas that night. So all along 74.