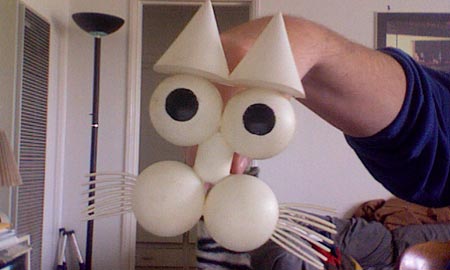 We were going to convene a roundtable discussion with Yoda Pez and Cat Stick on the pressing issues facing our Republic, when we realized at the last minute that Cat Stick doesn’t talk. He just stares at you with those imploring eyes, asking Why? Or Think Again. Or maybe I’m Hungry. It’s really hard to tell.

One thing’s for certain: Cat Stick has a First-Class Temperament. In the twenty-five years we’ve known him, that expression has never changed. Cat Stick doesn’t blink.

For example: “The Dow dropped eighteen percent in a week! What in god’s name are we to do?”

Or: “McCain is dragging the country towards fascism! How on earth can we stop him?”

It took us years before we understood Cat Stick’s wisdom. We treated him as a Magic 8 Ball, and we mistook his reticence as a call to inaction. We got very angry with him. We wanted answers, dammit.

And then one day, frustrated beyond hope — it might have been the new White Lion video — we decided to just stare back. Hard. Minutes passed. Our eyes watered. Finally, we had to look away.

Suddenly it was clear: You have to see the world for what it is before you can work to change it. Cat Stick was telling us to take a good hard look for ourselves, and come up with our own answers.

Or maybe he was hungry. It really is that hard to tell.

“Today’s report shows that the Governor acted within her proper and lawful authority in the reassignment of Walt Monegan,” said Palin spokeswoman Meg Stapelton. “The report also illustrates what we’ve known all along: this was a partisan led inquiry run by Obama supporters and the Palins were completely justified in their concern regarding Trooper Wooten given his violent and rogue behavior. Lacking evidence to support the original Monegan allegation, the Legislative Council seriously overreached, making a tortured argument to find fault without basis in law or fact. The Governor is looking forward to cooperating with the Personnel Board and continuing her conversation with the American people regarding the important issues facing the country.”

They really think the American people (a) are complete idiots and (b) have the attention span of a housefly.

Lord: if she’s still going to the game at the Wachovia(??) Center, Tailbunny had better bring earplugs. Philly Fan is not going to be kind. And, because of the Phillies, they will have this cute sense of entitlement.

@chicago bureau:
When the times are tough, Talibunny sticks her head in the sand and plugs her ears.

I’ve said this many times (usually when drunk or yelling) regarding this “famed” leadership “tactic”:

“When the assholes (management) sticks their heads in the sand, it puts them in the perfect position to kick’em hard in the ass.”

Time for Black Eagle to do some hoofing.

Item: Chrysler is thinking about acquiring GM. Well, then.

Cat Stick’s perspective must be similar in how a rock views history. It looks like it’s asleep, but it sees the brief flash of our existence.

@chicago bureau: I think the other option is to, of course, nationalize! The complete transformation of the GOP from the party of absolute free-for-all capitalism to the pre-Blair British Labour Party in 1945 (minus the universal health care, food rationing, schooling, milk for all children, and any semblance of actually trying to help ordinary people, etc.) continues.

Hooray for the Cat Stick! It’s nothing like I imagined and everything that it should be. How does it get along with Yoda Pez? And I’d love to know what Optimus Prime has to say about this mess we’re in.

@chicago bureau: Bebe Rebozo would be proud. That takes chutzpah. “Up is down. Day is night. Wrong is right.”

Cat Stick is wise, everyone should calm down, just look at me, do you see me panicking, flying off the handle, running off and doing rash and stupid things? Hell no, like Cat Stick I remain focused on the big picture, the historical perspective, calm and cool, yup, thats right.

@Promnight: We have to remember that “We have nothing to fear but fear itself.” May the Great Cat Stick serve as an example to us all.

@JNOV: You cannot imagine Cat Stick. You can only behold it.

@Promnight: God, I love you. Even when you drive me to Twitchville. Don’t forget that. Even when I fuss at you.