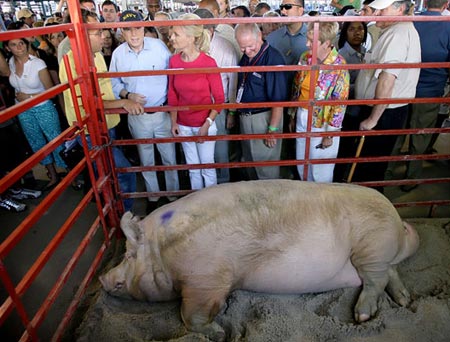 We’ve been giving Geezer’s Rovian Henchmen the benefit of the doubt — they know the pig and the lipstick — but near as we can tell, those crazy kids at the National Review Online must be smoking their own stash.

How else to explain the fact they want Talibunny to debate Thursday night?

In their world — which bears a striking resemblance to this one, but the letters are reversed — the problem is not that Sarah Palin talks, but that she doesn’t talk enough. And she never talks in her own words, but tries to regurgitate the worms her handlers have been feeding her.

If only those Evil McCain Advisers would Let Sarah Be Sarah, we’d all be rejoicing in the silk purse of her folksy wisdom, instead of dreading the sow’s ear of her postrational grammar.

Curiously enough, the woman leading the charge — NRO’s Kathryn Jean Lopez — has never met Palin. She only has the same pre-nomination YouTube clips the rest of us have been enjoying, plus the scripted entertainment that has America on the edge of its seat (where it’s easier to reach for the bag). We’d call her “naive,” but that’s for the innocents. She’s ingenuous.

McCain’s Rovians, on other hand — they’re evil, but they’re professionals. They know Palin. And we suspect they know what they’re doing.

Cognitive Dissonance. For some reason, these clowns think that anyone who upholds their brand is the toughest, smartest, wisest and bravest of them all. I read their posts when Talibunny was selected. One would think she was the 2nd coming of Maggie, Marilyn, Carol Brady and Henry Kissinger. Sadly, the reality was the four sides of Kathy Lee Gifford–crazy, inane, stupid and oblivious.

This why psychiatrists make a bundle off deluded and incompetent folks like this. Studies documenting this show just how dangerous they are. They’re better off at NRO where they can’t do any real damage.

I have, er, had a friend like this. He still thinks that being fired 15 times is all the employers fault. It’s not him at all because he’s the greatest leader ever. Truth is, if I had to go to war with him, I’d shoot him before I shoot the enemy (and I don’t say this lightly either) to save everyone else. Now, he’s on powerful anti-depressants to control his subconscious because his inner world does not jibe with the reality around him and he refuses to accept and deal with it. And yes, he’s a hard core RWer (one of the few in Canada City who still believes that Bush was right about everything.)

The more’s the pity.

Ya notice that first it was Kathleen Parker, and next, Mona Charen, who pointed out that Emporer Palin is naked? Thats a strategy, its women criticizing her, I think this is Rove trying to gain more control over McGeezer by ousting his mavericky VP pick. If you were going to orchestrate an ouster, who would you have lead the charge, men, or women, and note that la Parker is well credentialed on the pigfucking footwashing snake-handling jebuser front.

@blogenfreude: I’m ever more convinced that Devo was, and is, right.

Holy fucking shit, the Gallup poll, The Unicorn has wings.

Prommie: Here’s the deal — and this is coming from a guy who freaked the fuck out when Geezer went +10 on the Gallup poll after St. Paul. We cannot buy into this number.

There are five weeks left. And if I have my bet, the John McCain co-signed attack spot with Rev. NAH NAH NAH is in the bullpen… ready to be unleashed the morning after Sarah Palin’s collapse. So any numbers right now are fluid. I learned this the hard way earlier this month: patience.

And, speaking of which: Geezer hack Nancy Manfredjinsinjin Pfotenhauer says that Gwen Ifill had better stay away from those pesky foreign policy questions on Thursday if she knows what’s good for her.

And thus yr post-debate narrative is complete. Sarah Palin has five kids and can’t be expected to know all of the ins and outs of foreign policy, Joe Biden is a gaffe machine, and Gwen Ifill is a sexist. I’m almost sorry I am going to miss this for a baseball game. Almost.

@chicago bureau: I know, I know, but you know how it is, Hope(tm) springs eternal and all that.

Here’s a question: If the worldwide financial system goes ahead and implodes between now and Wednesday, before the bailout passes, do they pass it anyway? Or what?

@chicago bureau: Questions are a burden to others. Answers are a prison to one’s self.

Prommie: Note, of course, that it won’t pass until Wednesday at the earliest — Rosh Hashanah, you know. The financial system won’t implode before then — the market today is just Wall Street being a bunch of whiny little bitches. But if the bill goes down, then all hell will break loose.

@chicago bureau: I’m sorry you won’t be able to ridicule Talibunny with us Thursday, but I have to say it’s pretty risky to vest any HopeTM in the baseball game either. If there’s anyone better than the democrats at snatching defeat from the jaws of victory, it’s the Cubbies.

Katherine Lopez would find a way to defend Torquemada if he had a “-R” after his name. It’s almost not worth mentioning her- hers is a dull crazy, unremarkable with a muddy color and a sharp, unpleasant nose like bargain bin Chianti. I prefer a more refined crazy- a Peggy Noonan, say- or something spectacular and flashy like Phillis Shafley or my beloved Ping-Pong Balls. Katherine Lopez’ writing is as dull and pudding-like as her figure….

@Prommie: The quickest way to a blog is to sign up at blogger.com and use one of their default templates. They also provide a gigabyte of free image hosting.

@chicago bureau: Yes, patience. Barry is doing quite well right now — the charts I follow are returning to their pre-debate patterns — but then you have practical unknowns, like GOTV vs. wholesale registration challenges, The Criminals Formerly Known as Diebold, and five weeks of shit yet to hit the fan.

But Talibunny’s had her moment, so we don’t have to worry about that. And I don’t see anyone giving a shit about Rezko, especially not with the casinos to cancel it out. Still, heading into the month of Hunter Thompson — the weird are turning pro — I think we’re in good shape.