Stinque
Home Latest Comments Log in
If it smells, we’re on it.
Stinque
Assholes, they do vex us.
Psychogeezer 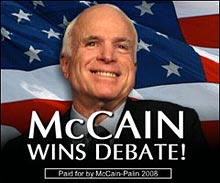 No joke — this ad appeared on the WSJ website this morning. But before you jump to conclusions, it obviously refers to the debate within the McCain campaign whether to forsake America in its time of need, or stay in Washington until the job gets done.

Debate Is On [NYT]

The problem is that McCain’s people can spin it either way. If he owns Obama (possible if Barry goes all law professor and stuff) you get all of the “not ready to lead” tripe. If he falls flat, they can simply say he was tired from flying around the nation, putting his country first.

Oh — screw it. They’re going to say all of that anyway.

Resolved– that the already-designated “Spin Room” in Jackson, Miss. should be ceremonially destroyed at 5:00 p.m. today, before anybody can infect a major gathering place at an institution of higher learning with a staggering amount of stupid.

Wow! Not only did he fly in and fix the economy, he can travel in time! Barry better watch out.

@blogenfreude: Psychogeezer is ready to use his DeLorean to take us back to a simpler time.

Or, he can just deregulate further, and make it really like the Fifties, like all the Republicans really want.

Are these assholes trying to create their own reality or is that actually their reality we see manifested in the crap they put out for public consumption? One possibility pisses me off, the other concerns me.

Will former SLA commander Donald DeFreeze aka “Field Marshal Stin-que” be moderating the debate live blog here tonight? The Stephanie Miller Show Drinking Game for the debate uses “my friends” as the cue. One should be plowed in about 20 minutes.

It just pisses me off that every debate has to immediantly be followed by the pundits using some arbitrary-as-fuck point system to determine who “won” (see Chicago Bureau’s comment above). No matter, I will feel no pain tonight as I will be *drinking* *live* with Chicago Bureau, Homofascist, and Be Right Back! In your face, Stinquers!

@flippin eck: I’m still a Cynic. I just moved here for the shiny new technology and cuz I like the community. You guys gonna live blog from Gotham City?

@redmanlaw: The beauty is, you can be a Cynic and a Stinquer! And I think this may be the place to be if you want a live blog, as Hunter mentioned on CP that he’ll be on a plane headed ‘cross the pond during the debate…unless FCS or another admin over there has plans to do it.

@redmanlaw: That’d be a reasonable quote regarding just about any point in the McCain campaign, if I’ve understood things correctly.

@flippin eck: I am a Stinquer now – Megan is gone, and Nojo carried CP for the longest time and deserves our loyalty. I blog two places now, and that’s enough. This is my home.

@blogenfreude: Speaking of which, that reminds me — moved Agitprop from the Blogroll to your staff entry. Better visibility that way.

While we’re at it, can we please be transported to an alternate reality where Al Gore really did become president? Or Jimmy Carter won in 1980 (nip this GOP crap in the bud)?

@blogenfreude: I’ll remain a Cynic who Stinques, but yeah, I dig the freeform over here. For today at least, we’re Stinquey, not Pinkey.

I’m road trippin this evening with the boy up to northern reaches, possibly arriving at our evening destination in time for teevee coverage of the debacletes, but definitely without the ability to comment on the live blog. I may tweet along the way, but I think “Fiorino’s Motel 5” only has dial-up and I won’t even have my laptop.

I’m assuming I’ll get coverage on some local NPR affiliate in upstate NY.

@chicago bureau: before anybody can infect a major gathering place at an institution of higher learning with a staggering amount of stupid.

@nojo: Thanks. So – has the depression started yet?

Let’s just skip everything since FDR. I’m willing to give up Kennedy not to have had Nixon happen.

CP has been NoJo since about March or April, I used to think “who are these strangers” whenever anyone else posted, other than FCS. Truly was bizarre and jarring to see Hunter pop up and say he doesn’t like the conditions on “his” blog. Yeah, sure thing there. I am thoroughly stinky, its mucho faster, it works, and all the cool kids hang out here, and I bet even the lurkers at CP wind up lurking here.

@Prommie: Have I said “absentee landlord” in public yet? Because I am now.

@Tommmcatt Yet Again: I want to be among the first band of humans to wander into North America, a vast, continent teeming with wildlife for me to hunt and gather, all of it with no experience with humans, so hunting probably consisted of walking up to the animals, patting them on the back, saying “how are ya” and stabbing them. Think of it, limitless territory before you, and a future consisting of thousands of years of unconstrained population growth and incredible hunting for me and my offspring. And I bet they weren’t too different from RML’s ancestors in 1492, except for the agriculture thing. Hell, they were RML’s ancestors.

@nojo: Gonna put a snare drum and a horn in it? And some posters and some magic beans?

@Tommmcatt Yet Again: Nixon was cool with Indians (Indian Self-Determination Act, return of sacred lands to Pueblo Indians) and for the environment (Clean Air Act, Clean Water Act, National Environmental Policy Act). I should put a picture of him on the office wall to balance out the male of the Clinton species greeting my dad, who was governor of our pueblo at the time.

BY THE WAY, he shouted, jacking the thread ever so subtly, I saw the 527 ad against McCain last night, OMG, it was brutal, absolutely wonderfully brutal, it was FCS brutal, starts right out “John McCain is 72 years old and has had cancer four times. . .” Then we go to a doctor who talks abolut how melanoma kills kills kills, and the whole time, close up photos of McCain with the cancer visible on his face, and then right after the surgery, bandages, big huge incision, zipper scar right down his face, and ends with “Why won’t McCain release his medical records?”

I almost felt sorry for him, but then instead I was gleeful and happy.

Wow, take a look at the articles in the Herald Tribune.

Military pact between Russia and Venezuela, pirates off the coast of Somalia, and Somalis hauled off a KLM flight by German authorities. I sure hope Black Eagle isn’t too prepped for economic issues, cuz there is plenty of topical foreign policy shit for Lehrer to dip into. Each of those three events can be easily handled by McCain and his Bush Lite “bring ’em on” plank, much more difficult for a Dem to finesse.

@nabisco: But he can see Ontario from his house.

@rptrcub: I can see the Pacific from here. I can haz Navy?

nojo: I can see the Gary Steel Works on a clear day from my place. Fortunately, this is a rare occurrence.

I’ll leave Yoda Pez on the shelf for now, but I’ve been following that second graph — which counts electoral votes only for states where either candidate has a five-point lead — for months.

Today it just bounced back after a long Palin Dip. (Straight lines! Get yer straight lines here!) You need to give that chart a week to settle into any given pattern, but combined with what the national polls are suggesting (yeah, I peek), the Talibunny Interregnum may be coming to an end.