Barry, Please, for Just a Little While, A Break? 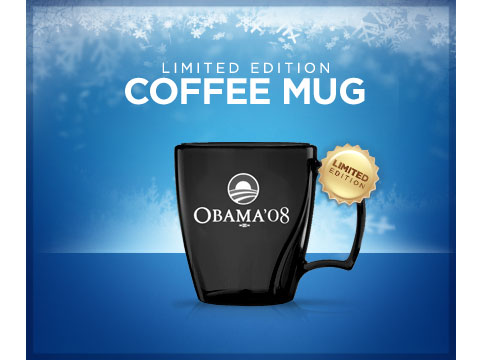 President-Elect Barry, along with David Plouffe, whose name always makes me think that he should be a dessert filling, residing between two delicious pieces of angel food cake, won’t leave me alone.  I realize there’s this whole, “We got him elected, now the hard part starts. . .”  esprit, which is a good thing.  However, I will not give Barry any more of my money, at least for a little while.  Today’s offering is a coffee cup, which is Black, like coffee, like half of Barack Obama, and like Regis Philbin’s heart (trust me).  Purportedly, this money is for the DNC, so it can elect more black socialists two years from now.  But I think it’s for some inaugural ball Cristal, which is a drink that stereotypical rich black people drink (stereotypical normal black people drink Colt 45).  Anyway, please, Barry, can you refrain from asking me to give you $15 dollars for this admittedly classy coffee mug?  Just allow me to enjoy the decrepit American economy in peace, for a little while. [BarackObama.com]