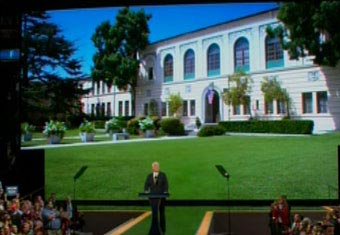 Looks like Nancy Wilson will have to get in line, because “Barracuda” ain’t the only thing the Geezer stole last night.

As he spoke, a number of images appeared on the Plasma of Liberty behind him. And the folks behind one those images aren’t happy.

TPM has been following the big story all day: a photo of a white building wasn’t Walter Reed Medical Center (as presumed), but Walter Reed Middle School in Los Angeles.

“Permission to use the front of our school for the Republican National Convention was not given by our school nor is the use of our school’s picture an endorsement of any political party or view,” said Principal Donna Tobin.

California dems are staging a press conference there any moment.

Meanwhile, second-string scandal-monger Daily Kos has identfied at least four photos from the Geezer’s video intro that came from an online stock-photo agency. (Good shots, good prices — we use them all the time.) What the Kos Kiddies find intriguing about the selections is that they feature black people, who otherwise were MIA during the convention.

“She’s going to learn national security at the foot of the master for the next four years, and most doctors think that he’ll be around at least that long,” said Charlie Black, one of Mr. McCain’s top advisers, making light of concerns about Mr. McCain’s health, which Mr. McCain’s doctors reported as excellent in May.

In other words: as many as 49 percent of doctors are predicting a state funeral for President John McCain, according to his campaign’s chief strategist. Charlie Black, in case you’ve forgotten, earlier this summer sent a message to Osama Bin Laden to hurry up that next terrorist attack so the Geezer can grandstand the tragedy.

Top McCain Adviser: Palin Will Learn National Security From McCain Before He Keels Over [TPM]

Lock Up Your Daughters

“I’ll continue to say I am blessed and very proud that [his late father-in-law] Jim Hensley, a war hero, a man who barely graduated from high school, was able to pass on to his daughter what he struggled for and saved for. That’s the ambition that all of us have for our children and grandchildren. If someone wants to disparage that, they are free to do that.”
– John McCain to Katie Couric

Kathleen Hensley Portalski says her father left her $10,000 in his will, and nothing to her children — his grandchildren.

For McCains, a Public Path but Private Wealth [NYT]

David Brooks in the Times:

See, it’s our fault. We won’t let him run nice. His blood is on our hands.

Oh, and McCain is a former POW who shared a Christian tryst with a guard. Sorry, contractual requirement.

The Education of McCain [NYT]

While McCain’s latest ad is being noted for going back to the “celebrity” well, what catches our eye are the two money shots illustrating his energy plan: a majestic midday view of an offshore drilling platform, plus a dramatic perspective of the cooling tower of a nuclear power plant.

(Note to copy desk: Please insert something about candidate’s medical report, just enough to make room for Yet Another Adult Swim Graphic, and lead readers to the link headline below. If you can fit in “Buttocks unremarkable except for some very light tan freckling,” more’s the better. Kthxbai, noj.)