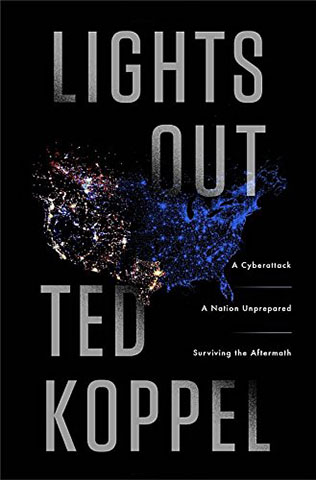 Title: “Lights Out: A Cyberattack, A Nation Unprepared, Surviving the Aftermath”

Blurb: “In this New York Times bestselling investigation, Ted Koppel reveals that a major cyberattack on America’s power grid is not only possible but likely, that it would be devastating, and that the United States is shockingly unprepared.”

Review: “As an individual who works in the space, Ted Koppel is full of it and himself. This book was written without the input of any expert or subject matter expert. Individuals with titles like ‘General’ and ‘Director’ may sound impressive but in reality know very little about cyber security. This would be like going to your local Geek Squad and asking them to help you troubleshoot a circuit you were building from scratch.”

Footnote: For someone who made his national reputation fanning the flames of the Iran hostage crisis, we’re not surprised Ted Koppel would resort to this.

Are MREs and bottle water from Y2K still good?

@ManchuCandidate: Of course not. You should always refresh your underground bunker monthly with fresh supplies from the Stinque Survival Store. Your family is depending on you to throw all your monies at us.

@nojo: About my only frame of reference for Koppel is Nightline airing a special episode a year into the Iraq quagmire wherein he read the names of all the soldiers killed in action, so he seemed pretty alright in my book, but I appreciate the, ahem, historical context.

@mellbell: Was that the episode some affiliates refused to air?

It’s perfectly fair to nail me for denigrating Koppel’s entire late-night career because of how it launched: Night after night of “America Held Hostage”, which eventually morphed into Nightline.

But hey, I was 19 or 20, and the incessant crisis-mongering was a factor in Saint Jimmy’s desperate move to send in a rescue mission, which upon the announcement of its failure, everyone in the dorm was sure the Draft was coming back tomorrow and we were all being shipped off to Vietnam II, just a few years after another helicopter ended the first installment.

Saw Ted Koppel in a Safeway in Potomac, MD in the early 90s, pushing a shopping cart. Giant head.

And if we’re going to have another massive power failure on the East Coast (a la 2003) I’d like to know about it so I can buy candles and Chef Boy-R-Dee canned ravioli. And guns. I want guns.

Putin upset Turkey shot down one of his bombers that violated Turkish airspace.

There is no Turkish delight today.

Why not just drop US po-leese into Syria and Iraq to fight ISIS? Tell them it’s an entire region filled with unarmed black motorists with busted tail lights. Really, it’s a win-win.

@ManchuCandidate: Now someone just needs to shoot a rando Archduke, and we’re all set for the apocalyptic WWIII that Real Americans desperately crave (to send other people’s kids to die in).

By the way (and completely off topic), SPECTRE is a must see. I have said before that Casino Royale is not only the best Daniel Craig Bond movie, it’s the best Bond movie full stop.

But here, Bond goes rogue, and it’s the best cold open in a Bond movie ever. There is, at last, an age-appropriate Bond ‘girl’ – Monica Belucci was 50 when the movie was being shot. Christoph Waltz is an excellent villain. I cannot wait for the bluray.

Happy Thanksgiving to you all!

@¡Andrew!: Merry Accordions and thank you for the chores?

@nojo: I pulled the record on Polka Thanksgiving. You’re not gonna like it.

@¡Andrew!: Dear god, man, do you know what you’ve done? What if my mother finds out?