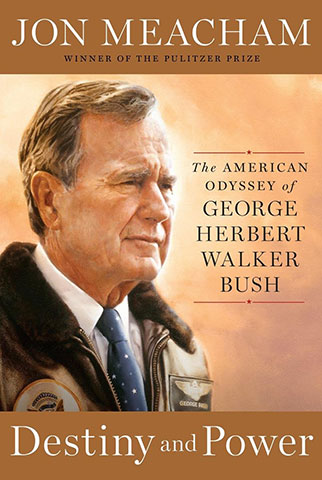 Blurb: “Drawing on President Bush’s personal diaries, on the diaries of his wife, Barbara, and on extraordinary access to the forty-first president and his family, Meacham paints an intimate and surprising portrait of an intensely private man who led the nation through tumultuous times.”

Review: “He may have been dealt a harsh blow by his debacle in the 1992 Presidential election which he lost decisively to someone he considered a ‘draft dodger’ for avoiding Vietnam War, but I’m sure history will treat him kindly and remember him as one of the best presidents America has ever had.”

Customers Also Bought: “The Triumph of William McKinley: Why the Election of 1896 Still Matters” by Karl Rove

Unless you prefer to go with Secretary of Defense Dick Cheney, whom Poppy bestowed on his son and the nation.

But let’s talk about the Fall of Communism. If ever there was an historical moment destined to influence generations to come, that was it. And George Herbert Walker Bush, who in his one moment of political sanity had decried “voodoo economics”, sent in the Privatization Platoon to deal with it.

This was the perfect time, all agreed, to Do Things Right. Sell the shit out of everything, in a nation that had not known capitalism or free markets in four generations.

So, swing and a world-historical miss.

You would think there would be a lesson in that, something about treading very lightly around a nation’s wholesale overnight power shift, about not imposing petri-dish structural ideas ignorant of local context.

Or you could expand the Bush Legacy into the Bush Family Legacy, and wonder how many generations it will take America to recover from their damage.

I had a theory on the Dan Quayle selection for a running mate. The Iran Contra committee was looking into evidence that showed that HW was in the loop and knew all about what was going on. Congress eventually had the proof but wouldn’t move to impeach Bush because that would leave the country in the incompetent hands of Quayle. Even if they tried to knock off Quayle for incompetence they wold have been left with Jim Wright who would have too big of an embarrassment to the Dems. So congress had no choice but to leave well enough alone.

@DElurker: I always thought that Quayle was the only dude who could make Poppy look good by comparison.

Apparently Gawker is restyling itself as the old Wonkette.

The Jezzies will be up in arms at the news that all celebrity gossip, etc., is relegated to the feminist blog.

@SanFranLefty: Led by Pareene. Our work here is finished.

@nojo: Except I can’t get my Disqus account to ever work over on any of the Gawker websites.

@SanFranLefty: Now that you mention it, I’ve gone this long without Kinja, and I don’t plan on starting.

@nojo: Exactly. BTW the only Stinquer who seemed to have perennial issues with logging in and passwords to WordPress was baked. Hmmm, I wonder why?

Sadly enough, I’d love to get an email now from her screaming “LEFTY! My password, give it to me, for fuck’s sake!”

Clarence Thomas. Fuck you #41. May your parachute not open.