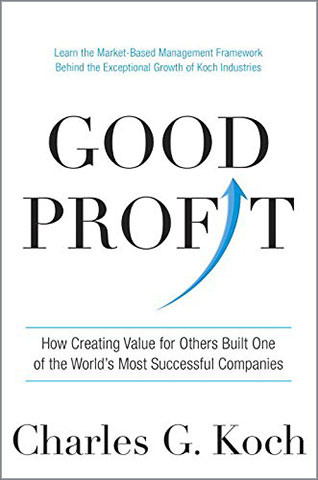 Title: “Good Profit: How Creating Value for Others Built One of the World’s Most Successful Companies”

Blurb: “In 1961, Charles Koch joined his father’s Wichita-based company, then valued at $21 million. Six years later, he was named chairman of the board and CEO of Koch Industries, Inc. Today, Koch Industries’ estimated worth is $100 billion — making it one of the largest private companies in the world.”

“Charles Koch is a genuine patriot, and his lifelong mission is to make America as strong and free as she can be.” (John Schnatter, CEO Papa John’s Pizza)

“Charles Koch is right, there is a difference between Good Profit and bad profit. And this book helps show you the way to good profit — whether you work for an international supermarket chain, a medium-sized regional business, or your own start-up.” (John Mackey, Co-Founder and Co-CEO Whole Foods Market)

“You’ll be pleased by his openness. He’s as candid about his failures as he is his successes, and willing to expose both in the interest of the greater good.” (Leslie Rudd, Entrepreneur, Winery Owner, former owner Dean & DeLuca)

“Here is a clear example of the American dream and how our country benefits when successful entrepreneurs create new jobs (and more taxes for government services) while providing the golden egg for philanthropic efforts.” (Charles R. Schwab)

Review: “You will get a picture in his book of how generational ethics comes down from his father who wrote a touching letter to him as he gave him a significant sum of money sharing with his son that he will consider it a mistake to have given him this money if he steals the glory and pride of accomplishment.”

Customers Also Bought: “Simply Rich: Life and Lessons from the Cofounder of Amway”

Footnote: Tell us more about this “socialism” you speak of, Bernie.

Good profit = stealing a shit ton of oil worth billions from Oklahoma first nations and getting away with it.

I am by no means a communist, but imagine the look on his well-fed face if we nationalized his shit. And maybe a bit of Dr. Zhivago – 9 or 10 families living in his mansion.

@ManchuCandidate: Congratulations, Manchu! Your long national nightmare is finally over! I never in my wildest dreams expected a total Liberal blowout. Looks like loads of NDP defectors put dreamy Justin Trudeau, my back-up huzbund and now PMILF, over the top.

Wow, people really fucking hated Harperbot 3000. Heez goin’ out like the Emperor down the elevator shaft to hayell.

My fam and I will def be celebrating on our trip to Vansterdam next month!

They really hated Harperbot where I lived. Early in the campaign, the Tories put up signs on several homes on my street. After Harper talked about cutting benefits to new Canada City people, these signs mysteriously disappeared.

The swine who was my MP before the ridings were jerrymandered (and someone I went to high school with) just got slaughtered in his mostly scared white people enclave, er, riding. Hehe.

Apparently, many polling places ran out of ballots.

The lesson for the taking defeat from the jaws of victory NDP, if the Libs are to the left of you then you’ve done fucked up huge.

Looking at the election board, it’s a lot like the US Amercia election with the split between urban centres and rural areas.

This is currently the top comment on the CBC’s Liberal victory story:

And this post is gonna hit Harperbot in the azz on the way out the door. Hawt damn, I wish that I could just quote the whole thing.

After nine years and eight months in office, Stephen Harper finally turned off too many voters. Soon, he’ll be hurling his political obituaries across the room.

Time, of course, may cool the steaming dislike of Harper’s abrasive brand of politics. Perhaps his creditable record in domestic and foreign affairs will be remembered more fondly when the alternative becomes clear.

For now, though, the sheer nastiness of the Harper style looms large in his defeat.

More than they wanted anyone else to win, they wanted Harper to lose. They’d even vote Liberal if that’s what it took.

…As the financial winds howled in the fall of 2008, he said, “We’re not running a deficit … that’s our policy. We’re not going into deficit.”

Six weeks later, the first whopper of a deficit was in the works. By spring, it was over $50 billion.

So, yeah, that was one doozy of a flip-flop. And so?

His freakish parsimony with information and his strong-arm tactics in Parliament made him Canada’s control-freak-in-chief. Where else is a government scientist forbidden to discuss the weather?

As John Ibbitson put it in a balanced and largely sympathetic biography, “no prime minister in history and no political party have been loathed as intensely as Stephen Harper and the Conservative party.”

And now on to the Liberals. Other than supporting the Keystone pipeline and the TPP, they’re lookin’ good. Thankfully, US voters likely will pressure enough Dems to kill Keystone, while Congressional RepubliKKKans won’t dare to give Obama a victory with the TPP, so it should be DOA PDQ, thank the FSM.

@¡Andrew!:
Not happy about the Keystone or TPP.

Remarkable considering the Libs were a distant 3rd at the start of the election.

@ManchuCandidate: One for the history books considering that the Libs were on life support just four short years ago, and people were seriously questioning their viability as a political party. Whatta comeback!