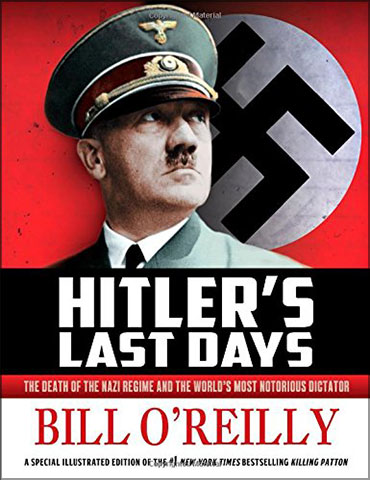 Title: “Hitler’s Last Days: The Death of the Nazi Regime and the World’s Most Notorious Dictator”

Wait. What. Blondi? “Adapted from Bill O’Reilly’s historical thriller Killing Patton, this book will have young readers — and grown-ups too — hooked on history.”

Review: “The title is a little misleading as this book covers General Patton more than it does Hitler.”

Bonus Batshit Review: “If as I suspect O’Reilly is telling us that Hitler and Eva Braun died in a bunker, then this is just propaganda. Bill O’Reilly is nothing more than a disinformation specialist. Many new books have come out in the last five years proving that Hitler and Braun made it to Argentina in a submarine. There are written documents and photographs. He lived his life out there in South America. The US GOVT knew all about it and could not do anything. The Nazis brought great wealth with them and Argentina welcomed them. This book should be discontinued. Go read the real histories you will find here at Amazon Books.”

Footnote: Learning that Hitler had a beloved dog certainly helps humanize the guy.

So now Bill O is copying his earlier “books” and marketing them as children’s books? What a great birthday present for my eight year old granddaughter, an Ammuricanized history of the last days of Hitler. Sorry, but Amazon’s site talks about Patton and Eisenhower threatening Germany without a mention of the Soviet Army flooding into Germany from the east. Sounds way too much like a mind-numbing chant of U-S-A, U-S-A!

I like the submarine angle – very Hunt For Red October. Gonna go through some boxes and fine my DVD.

O’Really the Sarah Palin of Historians.

But what happened to Blondi?

@SanFranLefty: According to The Fount of All Knowledge, Hitler wasn’t sure whether the Bunker Cyanide would work, so…

He tested it on Blondi first.