You know you want to see this movie! 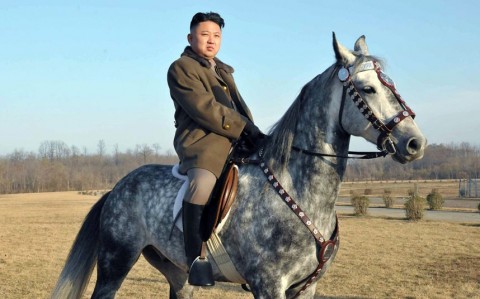 Everyone in the world wants to kill this fucking guy – for all the right reasons. KIMFUCK MUST DIE!

Nojo, want to make a movie? If we can get even a few thousand bucks, we can recruit a film crew and crowdsource the script.

Here’s the frame: Kim Park Kim  escapes from North Korea and invents a time travel machine so he can have 100 chances to kill Kim Jong-un but everyone in the world is so eager to kill him, too, he is forced to hold a contest and give away the other 99 chances.

The contest is simple. Kim Park Kim  will chose the first 99 most imaginative ways to kill Kim Jong-un.

This sets up story to plot point two. Everyone is showing up at Kim Park Kim’s front door with money, drugs, immense luscious breasts to bribe him into selecting their grisly plan to kill Kim Jong-un.

This will get us to plot point two. Even if we’re stuck for ideas, we can retread parts of the Palin opera.

What do you say, Nojo?

Isn’t this the plot of the new Terminator movie?

Come for the immense luscious breasts, stay for the nuclear inferno!

Question: Is Chris Matthews the dumbest man on the planet.

Also: Should one acquire two cats?

Plus: Does anyone speak Pug?

2. One does not acquire cats. Usually works the other way.

Now North Korea’s internet access is down, and all they see is a screen with the terrifying words: “Coming soon a new Kinja experience.”
If that doesn’t defeat ’em, nothing will.

@¡Andrew!: On the rare occasion I visit a Gawker site these days, I marvel at the ability of commenters to fight their way through the system.

I also marvel at the ability of Gawker editors to still publicly disdain reverse-chronological homepages, which, whatever their faults, and like democracy, continue to perform better than any known alternative.

I haven’t been here as often as I would like. Hope for a better 2015 for everyone.

@ManchuCandidate: You too, Manchu!

@ManchuCandidate: May all your grievances be aired!

Actually, I’m not sure what it does, beyond making Gawker comments impossible to follow. Which, most of the time, isn’t an issue, but sometimes I’ll follow a link to that neighborhood.

The reverse-chron homepage is what we do, what many blogs do, what Gawker used to do: Latest post first. But some years ago Gawker decided that made too much sense, even with a few “featured” stories to avoid burial in the stack, and now readers are lost in the wilderness of algorithm and design. A Gawker editor recently proclaimed undying fealty to that approach, but hey, I don’t make Denton Money, so whatever.

Watched The Interview tonight with my family. I was thoroughly entertained. Could’ve used more Lizzy Caplan, though.

Happy Jeebus’ Birf-day to all you who celebrate that sort of thing!

Boxing Day = used to be Canada City’s answer to Black Friday where thousands of normally sane people box each other for alleged bargains, parking spots, ATMs and shopping carts.

@ManchuCandidate: What happened to Boxing Day if that’s how it used to be? What a wonderful improvement if that bullshit no longer occurs — or are you implying it is now no longer limited to 12/26?

The internet is not doing enough to keep me entertained. I’m just saying.