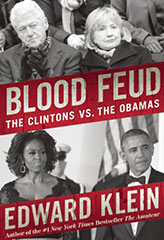 Title: “Blood Feud: The Clintons vs. the Obamas”

Footnote: Being 77 doesn’t disqualify Edward Klein from writing political books, but it does help to imagine his work as a series of long chain emails from your retrograde relatives.

Someone has been busy on Instagram. You overdid it with the padded (really?) heels socks and sandals, but the hugging kitty giggling drunk makes up for flouting convention. Not sure what’s up with the commode, but the stack of iPhones? SMH Seriously – why the hiking socks? Those Birks are looking kind of new.

Oh, wow. You stacked all of your iDoDads. Shill.

@JNOV: Not sure what’s up with the commode

“When I looked into the bowl, I thought I could smell the pits of Hades.” —Ken Burns, “America’s Majestic Bathrooms”, narrated by Peter Coyote.

One of my better ones.

@Benedick:
More like the invasion speedbump of Europe. Much like the nation of my ancestors Korea is to Asia.

@Benedick: I thought the French were the surrender monkeys?

@SanFranLefty: They’re the CHEESE eating surrender monkeys. I think you’ll agree it’s an important distinction. As the bishop said to the actress.

Speaking of which: Vicious. Wow. Well it’s always nice to visit the past. One can admire the chintz.

Plus: (To be sung with large amounts of vibrato and fake emotion) Don’t Cry For Me, Vuvuzela!

In other news, if they find a suspect in the murder of the Palestinian boy, will the suspect’s family’s house be bulldozed?

And fucking Darth Cheney is making the rounds? This world.

@Benedick: That saves me five minutes on tonight’s installment.

Just finished season numero dos of Orange is the New Black. Wow–talk about laughing through the tears. Jayzus.

@¡Andrew!: I watched the first episode and could not get into it. I feel I’ve failed somehow.

@Mistress Cynica: Couldn’t get through the first episode either — it ain’t Weeds — and I keep promising myself to give it another try. I wonder if Netflix has stats on unwatched queued shows?

@Mistress Cynica & nojo: The first episode was actually the weakest, and I didn’t like it much either. I don’t know the details, but it felt like a one-off pilot in which the writers and actors were just starting to find direction. It’s like a crazy mix of Oz/Lost/The L Word and The Wire. If you watch the next two or three, I promise that you’ll find the unique mix of tragedy and absurd, ironic humor immensely satisfying.

It’s a very challenging show that operates on many levels, and they’re not afraid of making strong statements about both intimate relationships and society. The characters make plenty of selfish, stupid choices–they’re in prison for a reason–and they’re also capable of amazing acts of kindness and humility. The way that the writers and actors are able to deftly turn the shows villains into sympathetic characters over time is one of the most incredible feats that I’ve ever seen. They’re inviting you to go on this emotional journey with them, and these actresses are giving the best performances of their careers.

Plus all of the graphic lesbian sex is so instructional!

(Slight spoiler alert) For those that have seen the season two finale, I have to say that I was on the edge when Crazy Eyes was sobbing while clutching that pack of cards, but I really lost it when Ms. Rosa drove away.

Aren’t we all in a women’s prison, at least metaphorically?

@nojo: I was just thinking that I need to rewatch Taxi Driver.

@¡Andrew!: Fuck. Might have to interrupt the flow of Vuvuzela blurbs for that one.

@ManchuCandidate: For better or worse, no relation.

@nojo: He was an upstanding citizen and will be missed. By a mile.

And here’s Richard Scaife looking so vital and healthy in this recent file photo. Death can be so cruel.

This post on why we’ve never detected any signs of intelligent life in the universe is one of the finest, mind-bending compositions on the topic. It’s for anyone like me who’s looked up at the night sky and yelled “come and get me–NOW would be great!”

So where is everybody?

@¡Andrew!: Good summary of a conversation that’s been making the rounds.

Here’s where I stand: “our search for signals stretches only about 100 light years away from us (0.1% across the galaxy) “.

We haven’t found anybody else because we’ve been limited to scanning radio waves from across the street. Any conclusions from that derive from ridiculously limited data.

@nojo: My view–based on years of Star Trek wish fulfillment–is that the intelligent life that’s out there is so different from ours, especially technologically, that we could be surrounded by alien communications and not even know it (Possibility 6). Mathematically, it’s simply impossible that we could be alone in our galaxy, as the figures prove. Much like the ant hill example, we’re working away on our little rock while they’re building intra-galactic infrastructures which are far beyond our comprehension. How could they even begin to explain it to us?

One of the commenters proposed an additional, Fringey hypothesis that I like quite a bit: Any Type II or Type III Civilization would quickly realize that it’s far easier to travel between dimensions into different universes than to expend the time and energy to travel the vast distances between stars within ours. They may have checked out of our reality completely, and gone somewhere with different laws of physics (perhaps a bit end-of-2001-ish).

Speaking of separate realities, I’m back from Beijing. I also went to Hong Kong and to Wuhan, the sweaty armpit of central China.

@¡Andrew!: Je suis confused: what does this have to do with musical theatre?

@Dodgerblue: Hey. Are you old enough to remember The Source Family? At least two of the members are in Yelm, WA in that Ramalamadingdong cult.

@JNOV: Yeah, they used to hang out on the Strip. Where the hell is Yelm, Washington?

@Dodgerblue: I can’t believe Yo Yo Ha thought that hang gliding off a cliff was a good idea. But he also thought he was god, so it’s not a huge leap. Except for the cliff part. And the crashing part.

Where the hell is Yelm, Washington?

Exactly! I buy my composting worms from some dude there.

“Yelm is a city in Thurston County, Washington, United States. The population was 6,848 at the 2010 census.”

“Ramtha’s School of Enlightenment (RSE) is an American spiritual school near the rural town of Yelm, Washington. The school was established in 1988 by JZ Knight, who claims to channel a 35,000-year-old being called Ramtha the Enlightened One. The school’s teachings are based on these channeling sessions.”

I think WA also has the largest number of serial killers. I live near the Green River, and I never made the connection.

Oh, and this about Yelm: Yelm is home of the first Class A Water Reclamation Facility and distribution system in Washington.[15][16] This system reclaims all of its wastewater, using it in local irrigation and added to recharge streams. The water also is used in Cochrane Park, a 8-acre (32,000 m2) wetland park that includes a catch-and-release pond for rainbow trout.[17]

So, that’s worth a cult or two, I suppose.