Stinque
Home Latest Comments Log in
If it smells, we’re on it.
Stinque
This is America.
Product Placement 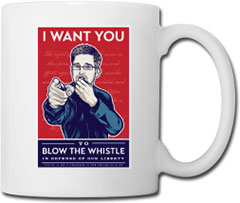 We were struck by this passage in the new Rolling Stone profile of Glenn Greenwald and Edward Snowden:

Snowden has been an undeniable boon for WikiLeaks, which has been struggling financially since 2011… After Snowden went public, donations to the group began to pour in at around $1,300 per day. WikiLeaks now sells T-shirts, mugs and tote bags with Snowden’s face on them (Bradley Manning’s visage, which once adorned similar paraphernalia, has all but disappeared).

Part of what fascinates us is that WikiLeaks was very late to the Snowden story — they did not, and do not, possess any of the thousands of Snowden’s NSA documents, most of which have yet to be revealed.

This was deliberate. Snowden says he didn’t want to dump his trove on the world — Bradley Manning style — and so he enlisted Greenwald (and WaPo’s Barton Gellman) to release and report them as they saw fit.

It wasn’t until after the initial stories that WikiLeaks became involved. It was an associate of Julian Assange who escorted Snowden from Hong Kong to Russia, and then perhaps to Venezuela or Ecuador, although the rest of Snowden’s journey was abruptly canceled when the U.S. revoked his passport. Sarah Harrison then stayed with Snowden in the Moscow airport for four months, until Russia granted him temporary asylum.

But that’s the last we’ll hear of her, because humble heroics aren’t part of this story.

In addition to Snowden tchotchkes, there’s also Free Snowden, a website ostensibly run to gather donations for legal expenses. Free Snowden is related to Snowden like the Red Cross is related to natural disasters: It’s officially the “Journalistic Source Protection Defence Fund”, which bills itself as “the only fund endorsed by Edward Snowden and WikiLeaks”, and says it is legally obligated to spend all funds on Snowden’s defense — as its sole named beneficiary — for now.

We have no reason to doubt them, but when tech-news website The Verge tried to nail down details, the response wasn’t exactly forthcoming. (For comparison, the Private Manning Defense Fund posts monthly accounting updates.)

And we certainly have no reason to doubt the WikiLeaks endorsement, since Assange sits on the fund’s board, and the same accountants administer his defense fund.

But absent a statement from Snowden himself, his own “exclusive” endorsement can’t be confirmed. He remains comfortable in Russia, near as anyone can tell, although nobody has been able to independently verify the circumstances of his residence — recent dinner guests were escorted “in a van with darkened windows, at night” to a, well, secure, undisclosed location.

For that matter, it’s the ACLU that has taken a “coordinating role” in Snowden’s defense, and they’re not raising money on his back. Perhaps they’ll receive some Free Snowden funds, and perhaps we’ll see some accounting for that.

Maybe we’re insinuating too much. Maybe Snowden’s cool having Assange front for him — any port in a storm — and whatever we might think of Assange, his actions here are commendable. Maybe we shouldn’t insist that crusaders like Assange be free of self-aggrandizement, demanding their absolute integrity in exchange for our respect.

Everybody loves a John Lewis, but not everybody can be a John Lewis — the higher the pedestal we place someone like him on, the more we admit how everybody else falls short. Even Lincoln dragged his feet about Emancipation much longer than Frederick Douglass would have preferred.

And besides, it’s not like the world is lacking for Bradley (now Chelsea) Manning tchotchkes — and those support her defense fund. For all we know, if WikiLeaks still offered Manning Mugs, we’d be bitching about them flooding the market.

Maybe this makes me an unfeeling asshole, but I can seem to work up the energy to care about the people on that “Courage to Resist” website. I mean, they volunteered to join a military with a history of fighting wars of questionable legality and/or morality. What did they think was going to happen? The Army is not just a job training program with dull uniforms and shiny buttons.

Fuck Snowden. If you’re a hero, you face the consequences of your actions and have the courage of your convictions. Nelson Mandela was a hero. Snowden is just another libertarian wannabe.

@Tommmcatt: Snowden has more cojones than all of us put together. He gave up his life–his real life–to ensure that we all know full well about the out-of-control unethical, unconstitutional, illegal, and just plain pointless crimes being committed against the American people and the world. He’ll likely never be able to see his home or his family again–can you imagine that? Worse than death, I’d say. Were he to have “faced the consequences,” at best he’d be living in a 6 x 9 cell for the rest of his life, but more likely he’d have been disappeared, tortured, and killed.

I have a Stinque water bottle, so how can I not get a matching Snowden water bottle sling? Someone call Cafe Press!

@Tommmcatt Says Pull My Finger: I’m sympathetic — I struggled with a similar judgment while writing this, which is where John Lewis butted in — but I’m not going to judge. I don’t know about you, but I simply can’t imagine any comparable situation I’ve encountered, and so I can’t say with certainty how I’d react. Any fantasy account of my own heroic actions would be mere bluster.

The Rolling Stone feature is a good overview. Snowden’s a convert: He was totally on board with his Patriotic Duty, until he saw the details. And he’s barely past thirty, when Black and White are still clear enough to cause outrage. If you detect some unbecoming self-aggrandizement, well, that I can identify with. I could get astonishingly full of myself back in the day.

Besides, make what you will of his putative heroics, his real heroics were fessing up. Snowden could have remained anonymous — everybody thought he should — but he knew that would just start a witch-hunt among his former colleagues. He spared them a lot of grief by putting his name on it. (Granted, they were getting Uncomfortable Visits either way.)

Setting personalities aside — admittedly hard to do when Greenwald or Assange are involved — we have to address whether the NSA docs were (and are) worth revealing. I think the answer is Yes, because even Ron Wyden wasn’t going to get them, and he sits on the Senate Intelligence Committee. These are proving to be the Pentagon Papers of our time, except they’re not history — that shit’s still going down.

@nojo: … I simply can’t imagine any comparable situation I’ve encountered. Think of an open ended bus-and-truck of Cats. Having to put that slap on your eek eight times a week. Hiding out in Russia is probably a lot like that.

I really don’t know enough about this. I try my best to keep Snowden separate from Greenwald, who is sort of insufferably self-righteous. Not that there’s anything wrong with that it just can grate on the nerves after a while. If the documents are so vitally important then why haven’t they all been released? Why this piecemeal approach? Perhaps there’s some long-term strategy involved, I don’t know. And it’s hard for one to stay focused on a story for such a long period of time when it’s not about oneself.

I daresay that Mr Snowden saw a different future for himself. Can’t be much fun to be the new Kim Philby.

@nojo: @Benedick: @¡Andrew!: I have to judge the guy. At best, the way he went about what he did was ignorant- the company he’s had to keep has overshadowed any benefit the leaks might have had. At worst, it screams of the “look at meeeee!” antics of Assange, and, to speak plainly, Chelsea Manning. As Benedick says, if this was so important, where’s the bombshell?

I have no problem with people leaking information in a way that actually benefits the country. But this is just cheap grandstanding. Again, if you want to make that kind of statement, have the balls to take the fall as well – rendition and torture included. That is what makes a hero, and had he done that I’d be in full support. Not facing the consequences of your actions just makes you a coward.

@Benedick: If the documents are so vitally important then why haven’t they all been released? Why this piecemeal approach?

As Greenwald tells it, Snowden didn’t want to do a massive dump. He wanted to (a) personally vet the documents themselves, then (b) let Greenwald and WaPo publish them as they saw fit.

My further conjecture — it’s not mentioned — is that historically, Drip-Drip-Drip gets better coverage than Dump. If everything dropped in June, there’d be a week or two of news, then back to Narrative du Jour. The cache is still generating Major Headlines this way, since each revelation is a new story.

I would just add that Snowden mugs do not in any way impinge on the man’s integrity. Neither would a subscription to mesohorny.com.

This is not a perfect world. We all have assless chaps in our closets. Some of us wear them with grey wooly socks. We are human.

@nojo: Unless the issue is gun violence, in which case all bets are off.

@Benedick: The Snowden mug has nothing to do with Snowden, and everything to so with grandstanding Assange. But I’ll provisionally accept that Assange has done right by Snowden, clutching my pearls all the way.