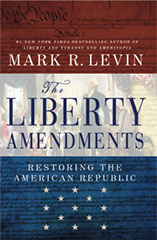 Review: “The Liberty Amendments provides hope, direction, and an attainable goal for all lovers of liberty, conservative and libertarian alike.”

Customers Also Bought: “Blacklisted by History: The Untold Story of Senator Joe McCarthy and His Fight Against America’s Enemies” by M. Stanton Evans

Footnote: A Constitutional Convention bypassing that pesky Congress has been a Wingnut Wet Dream all our adult life. But with Republicans packing state legislatures through gerrymandering and voter suppression, is it still laughingly inconceivable?

Of course, anybody writing a book on the subject knows this. But Mark Levin pays the mortgage with the comfortable knowledge that his readers don’t.

Pointless wars for the gain of a few and NSA eavesdropping are freedoms, but being nice to the blacks, helping poors and legitimately investigating the tax legalities of “freedumbz” foundations (among many others) are not.

And Deleware. And Illinois, probably. And maybe Wisconsin. And PA once they come to their senses and realize GOP control is state suicide.

The attacks by the security apparatus on Glenn Greenwald are getting personal.

@SanFranLefty: agree with him or not, that is not the way to handle it.

@Dave H: If nothing else, the lawsuits would be entertaining for years.

Is it just me, or do both sides of this thing- Snowden, his allies, The NSA and theirs- seem petty, somehow? Like opposite sides of a divorce case fighting tooth and nail over a double-wide and a pregnant pit bull. I know I’m supposed up be worked up, but meh. So what? The phone company knew I made calls and who I called. And as for the huge hrroic release of information, also, super-meh. We all knew they were doing it, libertarian dude.

Must be nice to have a 28-year-old Brazilian boyfriend though.

@Tommmcatt Can’t Believe He Ate The Whole Thing: The problem at this point is not that both sides are being petty, but that one side has an unchecked power of legal detention over innocent civilians with no right to counsel under a controversial “anti-terrorism” law. It’s not just what the NSA and Britain’s equivalent does; it’s the aggrandizement that power represents.

It only gets worse.

@Tommmcatt Can’t Believe He Ate The Whole Thing: The timing of the search the day before this article appeared ain’t coincidental.

You’re not paranoid if they are after you.

@Tommmcatt: The NSA temp that monitors your comments, tweets, blog posts, emails, and household closed-circuit television is deeply offended by your lack of appropriate outrage.

@nojo: Well, the unchecked detention bothers me, of course, but I’m still not amped up about the phone monitoring. Too big a data set.