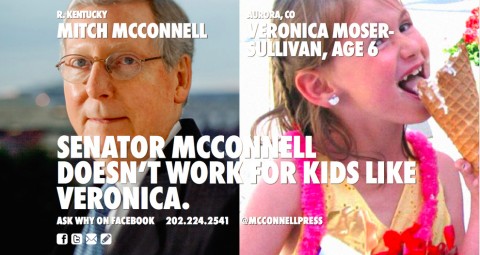 Here’s what Feinstein, Schumer, et al should do: Just come up with a bill that outlaws any semi-auto centerfire rifle .20 cal and above (because, as you know, fully auto weapons are pretty much regulated out of availability for anyone). No exceptions and go to a debate and vote on that instead of a bullshit “assault weapons ban” that regulates firearms on the basis of cosmetic features instead of function and caliber. For example, a Ruger Mini-14 firing a .223 cal cartridge (same as the evil AR-15) skates in most gun control bills, although a Mini 14 can be pimped out with pistol grips, folding stocks, flash hiders, forward grips, barrel shrouds, curb feelers and raccoon tails on the antenna to make it look more bad ass but does not change the essential characteristics of the rifle. If they win, they win and no more scary black rifles. Throw big magazines in the bill, too, for that matter.

Next, propose a real “universal background check” bill. That last compromise bill everyone was crying about was bullshit because (a) you could drive a truckload of AKs through the exceptions and (b) the mental health records provisions were all fucked up. The bill had no definition of “mental health record” and did not state what disorders/diseases/whatever were disqualifiers. My friend the state hospital psychiatrist had a LOT of problems with that part of the bill. Civil libertarians should have raised those issues. Also, tribal govermental criminal and mental health records were not included in the bill – Indian bad guys with disqualifying convictions only in tribal court would not have been caught in a background check. Did you know a dude could sell guns out of his house out of his “personal collection” (another undefined term) to anyone he wanted to under that bill? To vote on that bill and to say it created a “universal background check” system is just fucking lying to the voters. It’s either universal or it’s not.

Next, start rolling up bad guys and kids with guns. Subject released felons (who may not lawfully possess firearms) to search at any time, especially if they’re on parole or probation. Enforce the laws on “straw man” purchases and prosecute people who provide guns to disqualified persons. If the cops stop a kid or a felon for any reason, search the vehicle. Constitutional lawyers who are also gun control advocates should be able to figure that one out. The fucking Democrat DA here who I supported doesn’t even know enough to charge an 18-year guy who shot two people on New Year’s Eve with being a minor in possession of a firearm (you have to be at least 19 to have a gun for legitimate purposes). She should have also charged him with unlawful carrying of a concealed weapon. Recent headline in the local paper: “Grand jury issues no bill on ham sandwich.”

Put all this into a comprehensive bill and introduce it. Throw in a handgun ban while they’re at it. The half measures are going nowhere. If there are people and legislators who really believe in this, have at it. They need to just come out and say “fuck it, we find this unacceptable” and that people can’t be trusted with this kind of crap lying around the trailer or bunker and it needs to be scooped up and destroyed, with or without compensation to the owners. Then there will be a real debate instead of this nibbling around the edges shit that’s not going to do anything. Universal background check, my ass.

@redmanlaw: the other thing that needs doing is Reid needs to make that motherfucker Mitch stand up and actually filibuster. TALK. MAKE HIM WEAR THE ADULT DIAPER.

And no trading promises not to introduce amendments if the bill gets a certain number of votes. Fight for it like you believe in in then we’ll see where we’re at.

@redmanlaw: Do you think they know enough about the subject to be able to legislate with any intelligence? I don’t. You know about guns and how they’re used but I doubt many people have as much knowledge.

@Benedick: My learned friend has hit the nail on the head. As a rule, our side doesn’t know shit about guns. When our guys go up and propose legislation, they generally have no clue about what they are talking about and therefore lack credibility on the issue, which makes me fear what those clowns do on anything.

Ex. A – Rep. Carolyn McCarthy (D-NY) discussing gun control legislation and admitting she does not know what certain accessories are and why her bill bans them. http://www.youtube.com/watch?v=ospNRk2uM3U

Democratic politicians give lip service to respect for gun owners and hunting (except for Biden, who in saying guns can be used defensively by firing random shotgun blasts off the front porch; see Ex. B) but they really don’t give a shit about and probably really don’t even like gun owners, which is true of our side in general (Ex C – see comments on Gawker or Raw Story anytime a someone is hurt or killed in a shooting.) They know that 99 percent of gun owners* tend to vote Republican so why bother reaching out?

@redmanlaw: My only experience with guns was at school where I learned to protect the queen while wearing a WWII uniform (very very scratchy: you need to wear pajamas under) with a similar rifle. I read your gun posts with much interest as you know what you’re talking about. You can be lyrical about guns and I’m intrigued.

It seems to me that the NRA is best served by the ignorance of its opponents. Any chance you might be flying to DC to instruct the Dems?

@redmanlaw: I am fully in support of a bill like that. As long as there is a lobbying budget being spent, though, we can be assured that nothing like it will ever be imagined, much less see the light of day.

I wonder why intelligence testing is never mentioned in these debates –

@DElurker: That, like every story of its kind before it, is simply heart-breaking. And it shows how insulated I am from gun culture that, to me, it beggars belief that anyone would think it reasonable to gift a rifle to a five-year-old (perhaps a four-year-old, even, since it was last year).

@mellbell: I would not give a five year old a BB gun, let a long a .22. Those people are fucking morons.

@redmanlaw: Agreed. But they’re nothing to sneeze at. According to the manufacturer’s website, in 2008 they sold 60,000 of these pint-sized rifles, and in 2009 they more than doubled the size of their facility. And it wouldn’t surprise me if there were other companies tapping into this market. Not that the manufacturers are to blame. They’re just feeding the parents’ demand.

I looked at the Cricket when I was looking for a .22 for my brother to teach his kids (10 and 12) to shoot with. Those things are really tiny and feel almost toy-like.

Son of RML started shooting when he was about 12 and we go out a few times a year. He’d rather go longboarding with his friends, though. He was kind of bugging me for an AR, but I told him I decided I couldn’t justify the cost for the limited amount of use I would get out of it.