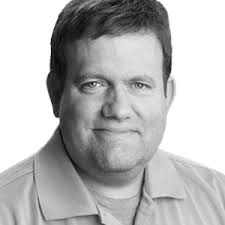 Maybe it’s because you used bigots, idiots, and sociopaths to win elections for the last 50 years:

Frank Luntz, the media-friendly Republican consultant and word wiz, told a group of college students this week that Rush Limbaugh and right-wing talk radio are “problematic” for the GOP and partly responsible for the stark polarization within the nation’s political discourse. He only dared to speak so candidly about Limbaugh and other conservative hosts off the record. A secretly recorded video, though, captured Luntz’s remark.

Some say we need a renewed, less hateful GOP in the opposition. I say fuck ’em. Let them all be cast into the political darkness for the damage they have done, the lives they have ruined, and the social programs they have destroyed. Fuck all of them.

I’ve been reading Salman Rushdie’s artified memoir of his time under the fatwa with great interest. As Chris Matthews is fond of saying: I learned something here.

But there is a sentence it behooves me to share: and I quote: quoting Salman Rushdie writing of his darkest time when he didn’t even bother to shave: when all he wore was a pair of sweatpants and a maroon tee; he doesn’t mention the extent of grease stains; or spaghetti stains; or egg stains; but: here –

Instead he slouched around the house in Birkenstocks, the uncoolest of all possible footwear, except for Crocs.

One can only be glad he didn’t mention socks. Perhaps grey wool. Or 90% white cotton with 10% spandex. Or horizontal black and white ‘designer’ socks. Or Disney themed. Or just socks. Sox’n’Birx.

@Benedick: OMG, I’m like on page 75 of that memoir. Now I have to get cracking to get to the Birkenstocks section.

/Not that there’s anything wrong with Birkenstocks. Except for when they’re worn. Or worn with socks. We <3 U, Nojo!

Footwear options for the Son of Man today: Birx, Tevas or Keens?

Nothing make of some sort of rubber that will make his feet sweat and stink to high heaven.

It makes sense to wear socks with Birks here.

@Benedick: Crocs make some great ballet flats. I tossed one pair after wearing them nearly every day for a year because there was no tread left. The clogs, however, are unforgivably ugly.

I have Croc sandals and they are so-so. I really need to splurge on some Tevas again. I can’t wear the Crocs in the surf or they will float off of my feet. The last pair of Tevas that I had were great for surf fishing when there is a lot of broken shells.