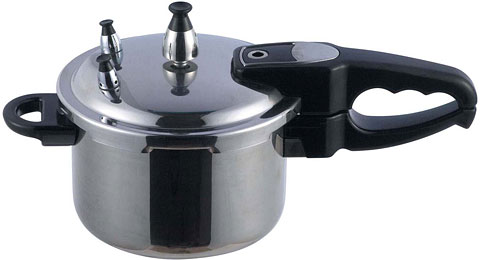 With today’s news that the Boston Marathon bombs were packed inside pressure cookers, folks are pointing to sources that say such devices are You-Know-Brown-Skinned-Who’s terror weapon of choice, such as this 2010 DHS report:

Rudimentary improvised explosive devices (IEDs) using pressure cookers to contain the initiator, switch, and explosive charge (typically ammonium nitrate or RDX) frequently have been used in Afghanistan, India, Nepal, and Pakistan. Pressure cookers are common in these countries, and their presence probably would not seem out of place or suspicious to passersby or authorities.

Well! That certainly settles it! Except…

Because they are less common in the United States…

“Less common”. Meaning not exactly frequent, but not entirely unknown.

And definitely not unknown to the melanin-deprived set:

But it’s important to bear in mind that the ability to make these bombs is hardly unique to al Qaeda and its sympathizers. Members of at least one prominent white supremacist website have shared terror tips from [al Qaeda magazine] Inspire, which one called “highly recommended reading.” Pressure cooker bombs are also discussed in detail on this anarchist site, which describes how to build what is “affectionately known as a HELLHOUND.”

Does this mean they’re going to take away my rice pressure cooker?

@ManchuCandidate: No, but we’re going to start calling them Freedom Cookers so the terrorists don’t win.

“We Are All Nancy Grace.” Does that mean part of me is Nancy Grace-like? No wonder the collies just slunk out of the room.

My mother used one for years. We had two, large and medium. I can see their utility to bomb makers however. Thank goodness Mama is long gone, because I think her heart would just break these days, what with all the killing and mayhem.

Looking at black powder as the likely explosive: http://rboatright.blogspot.com/2013/04/boston-marathon-bombing-deriving-some.html

Like everything else related to shooting and reloading, it’s really hard to come by black powder (or other smokeless reloading powders and primers) these days:

@gunnergoz: I used to be mesmerized by that thing — shhhhhhhhhh-ch-ch-ch-ch-ch-shhhhhhh! No memories at all of what Mom cooked in it…

@nojo: I prefer the stealth technology of the crock pot or stove top for my weekend frijoles, chicos and jamón.

@redmanlaw: Consulting my vague memory, I think the only time the Beast Pot was used was for Thanksgiving. That might suggest peeled potatoes having the taste crushed out of them inside.

I’ve always been afraid of pressure cookers, which seem likely enough to blow up when used for their intended purpose.