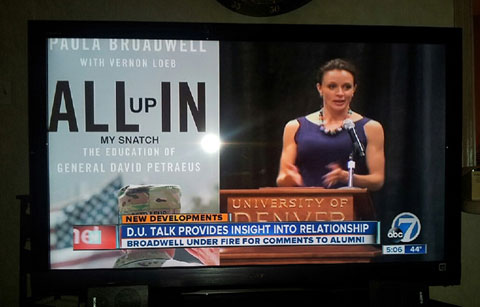 Our guest columnist appears to have been celebrating Colorado’s legalization of marijuana.

On 7NEWS at 5 p.m. on Monday, the station reported on ex-CIA director David Petraeus’ relationship with his biographer, Paula Broadwell.

Broadwell earned a master’s degree at the University of Denver and had given a speech at an alumni event several weeks ago that may have provided insight into the early stages of their relationship.

During the broadcast, 7NEWS showed an image of Broadwell’s biography of Petraeus that is called, “All In: The Education of General David Petraeus.”

However, when the 7NEWS reporter went on the Internet to get an image of the book cover, the reporter mistakenly grabbed a Photoshopped image that said, “All Up In My Snatch.”

“It was a mistake,” said KMGH-TV News Director Jeff Harris.

Even I check photos that I cravenly borrow from the intertubes.

@Dodgerblue: Fun detail: AmericaBlog couldn’t find the “original” online last night, leading them to suspect an Inside Job at the station.

Designers will never learn: Never fuck with something that may go Production.

@nojo: I think I’ve told here the story of a lawsuit I was involved in where some poor schmuck put a phony credit, Heywood Jablowme, into a Disney home video. The Mouse crushed him.

@Dodgerblue: Fine. Bring her up. It doesn’t bother me. Whatever makes him happy. I’m over it. It’s done. Some men would rather obtain a restraining order than stop to think what’s in their best interest. All I care about is his happiness. That’s all I care about. It’s not my place to judge. So long as he’s happy. He should be happy. We should all be happy. I doubt he’s happy. But. His choice. Rielle. Rhymes with bitch.

@Dodgerblue: See what you did?

@Benedick: Darling, don’t take on so! He wasn’t worth it, really he wasn’t. Too much hair. And he has bitey teeth, you said so yourself. Focus on the good things. Fall. Silicon lubricant. Leather jockstraps. Sing it with me: These are a few of my favorite things…

Holy shit, that woman has arms like Master Chief!

I’d give the space alien a buck if she made out with Broadwell on TV. Can someone who lives near her get a message to her. I’m serious.

@Tommmcatt May Just Have Some MJ In His System As Well, So What?: He was too good for me. I could never match his tan lines. I would drive by delivering milk and there he was, glad to see me. In blue jeans and an old tee shirt.