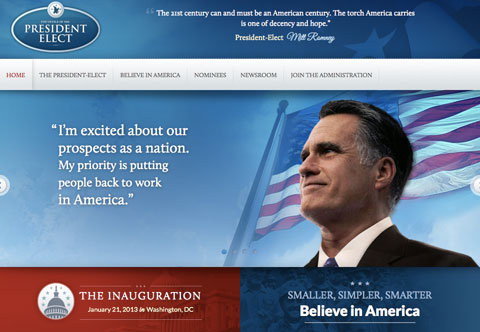 Well, maybe in the alternate dimension where Karl Rove was sucked away last night. But this web page can still be found waiting for deployment — with the (correctly spelled) title we’re using for this post — trapped in that purgatory where other failed startups go to die.

Until they take it down, anyway. Or just crashes. Took us forever to load.

and Drunk Diane Sawyer is officially a thing on Twitter: @DrnkDianeSawyer

@al2o3cr: Makes me even happier he wasn’t elected. Those inspirational “quotes” are as flat-footed as the candidate was.

It is to laugh.

I would go and skip about the garden if I weren’t crippled. I would romp with pugs.

That being said, I thought his concession speech was actually decent. If the person who made that speech had run for president he might have done rather well.

On the other hand the president’s address was not, in my opinion, entirely successful. It was twice as long as it should have been and I never like it when he goes for ‘uplift’. Also, I was very troubled by the drapey cut of his trousers. One accepts that he’s a straight man – no one is perfect after all – but that’s no excuse for the vagueness of the trouser/shoe connection: yes, in an ideal world a man’s trousers should caress his shoe but they shouldn’t just engulf his foot. A man’s trousers should end decisively, like his speeches. I was very impressed by the chinos he was wearing when visiting N Jersey. Like the rest of the country I couldn’t help but admire his gay-boy butt/str8 man fly dichotomy. And naturally one doesn’t expect him to show up for important speeches wearing assless chaps but even so: for a man with such an exquisite sense of the rightness of the tie/collar ratio it’s a little disconcerting to see him exhibit a seeming lack of awareness re the amount of fabric in his pants. Plus, that baggy thing he seems to find acceptable in the fit of the back of his jackets. He’s got the perfect body to wear suits so let him show the rest of the world the hotness. Is that too much to ask of the Leader of the Free World? I think not.

But all around accolades to the First Lady and her Daughters. Dazzling wardrobe; formal but not stuffy, the girls suggesting a state occasion while not dragging up as Junior Misses. Very impressive. The colors of the three ensembles harmonious but not matchy-matchy. Understated yet opulent. And of course one must take the president’s suit in the context of being the framing device, as it were, of his wife and daughter’s jewel-toned toilettes. Which is why one regrets his own tailoring. I’m not looking for the pencil thin cut that’s currently the fashion – no man can wear that beyond 28 – but let’s not abandon all criteria. We are, after all, a nation of values.

Unless his aim was to evoke an Eisenhowerish look, promising a return to the prosperity of the 50s. That I could accept. But really, for the man who rescued the American auto industry there’s no good reason for him to be carrying quite so much excess fabric in the pants. He’s got thighs: let us see them.

Thank you for your time.

@Benedick: “Matchy-matchy”? “Jewel-toned”? I think I read those in this morning’s WaPo.

Men’s trousers (those not coming from a proper suit) are a challenge to find these days, at least on a 2012 recession budget. I think they call the kids “hipsters” because no single pair of pants can possibly reach the waist.

@Benedick: One of my images from the rally demonstrates that both the fit of his suit and his posture left..something to be desired.

@flippin eck: Wow, those are nice! I especially like the row of broadcast heads doing their standups.

@flippin eck: Kinda looks like he is gripping the podium for support. Great set of pics, btw.

@Beggars Biscuit: “The torch America carries is one of decency and hope.”

@Beggars Biscuit: Thanks! That’s my second favorite after the one of hugging Joe and Shelly about to be engulfed in confetti.

@flippin eck: Awesome pictures, Flippin! Those are fantastic. It’s one of those times you wish you had the godzillion-mm lens to get a close up, I’m sure.

@IanJ: Yes indeed. However, any more zoom than the 70 mm I had and they all would have been hopelessly blurry without a tripod.

@ManchuCandidate: Wait till they find out about the National Health Service. That will be awkward.

@Mistress Cynica: Or that they’ll be constantly hounded by skinheads asking “got any fags?”

@Mistress Cynica: Have you been watching Call the Midwife on PBS? I think it’s well done, and I also love how every episode is a thinly-veiled propaganda piece for the NHS. Inevitably, a doctor or midwife will tell some patient, “If this had happened to you a few years ago, you’d be dead by now. But now thanks to the National Health Service, we can save you and your baby in hospital!”

T/J: my daughter is coming to town tonight for two days of wedding dress shopping. I’m not going, although I am, uh, paying.

@Dodgerblue:
Mazel Tov (except the part about paying.)

@ManchuCandidate: Thank you. We like the guy a lot. Among other virtues, he is 6-7 and can juggle while riding a unicycle.

@nojo: He’s a lapsed Mennonite from Kansas, got a full ride to Pomona College and saw the light. They are living up the road from Eugene, in Portland. Guess where he is working (yes, he’s working), which is also where they met. No, not a coffee shop. Next guess?

@flippin eck: Great pics. We’re camera-mates! That’s just painful to see. The Leader of the Free World slumped at a podium wearing clown pants. Though to be fair, I suspect he might have been a tad tired.

@ManchuCandidate: Assipes don’t even take the trouble to find out how one addresses HRH. One thing one does not do is call he Your Grace. She not the motherfucking archbishop of Canterbury for fuck’s sake.

@Benedick: He wasn’t the only one. It definitely felt like the crowd vibe had faded after hours of waiting and standing. It was, what, 1:30 EST when he finally spoke?

@flippin eck: I went to bed. We saw it last night.

@Benedick: Not for nothing have I watched so many BBC productions.

@Dodgerblue: My Manchestah-born grad-school roomie was a rock climber. Our Mildew Palace in Eugene was a block away from the Skinner’s Butte climbing wall.

@nojo: He (the financee) let me fool around in the climbing gym. It was fun and I didn’t kill myself.

Meanwhile, the Twitterz tell me that marriage is officially undefended in Washington State.

@nojo: The People’s Revolutionary Homosupremacists are rounding up the heteros for their mandatory gay marriages as we speak.

The zenith of the mass marriage event will be when we force the two butchest Huskies on the UW football team to exchange rings, kisses, and workout tips in a shotgun ceremony witnessed by a packed stadium. The unhappy, yet totally ripped and hawt-as-hell couple then will be ferried to a lavender farm on San Juan Island for a honeymoon filled with painting, bicycling, and long walks holding hands on the beach at sunset.

@¡Andrew!: I have distant relatives on Orcas Island (haven’t been in touch in decades), and just checking it now, I see there’s a Moran State Park. Which would be hiliarious if I knew more about the Distant Relatives.

@nojo: Been to Orcas Island and climbed to the mountaintop in Moran State Park. Wonderful place for a honeymoon.

@nojo: Oh and the biggest WA surprise is that we just stone(d)-cold legalized MJ for all adults over 21!

When the reporters went to interview the people at the victory party, they were all “Duuuuude, are you the waiter? I’ll have the fajitas.”

@¡Andrew!: Oregon has to settle for a contact high.

@nojo: I’d be embarrassed to lose that badly in Scrabble.

/and now for something completely different/

@TJ/ Jamie Sommers /TJ: I am SCREAMING with laughter! Thanks!

@Beggars Biscuit: Did you get any confetti as a souvenir?

@Dodgerblue: That reminds me to go check on our Words With Friends game.