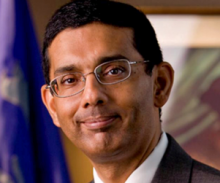 And he was so close to winning Wingnut of the Year:

Another layer of intrigue has been revealed in the saga of the downfall of conservative academic and rising Evangelical star Dinesh D’Souza, who resigned from his perch atop King’s College today after it was revealed that he had a fiancee while also having a wife. Right Wing Watch reports that his mistress/fiancée, Denise Odie Joseph II, was also married, and said in April that she was going to vote for Mitt Romney, “because [her] husband told her to.”

Shouldn’t he have cemented his position in the right wing firmament before going for Wife 2.o?

D’Souza rose to prominence this year behind his movie 2016: Obama’s America, which has grossed over $30 million. On Tuesday, the Christian World magazine reported that D’Souza had been introducing Odie Joseph II as his fiancee at a speaking engagement in Sept., despite still being married to first wife, Dixie. He has long been a paragon of traditional “family values”, which makes the revelation of his dual-not-quite-marriage quite shocki— nah, this shit happens all the time.

Sounds like he’s got traditional evangelical family values down pat.

I think I found a subject for my dissertation. I’m going to derive a mathematical formula to describe the statistical probability that a family values pundit/politician will engage in the very lascivious activity which they spend every ounce of their celebrity to denounce.

@hunkamonkiman: somehow I think the thing should be in Vitter units and somehow involve the infinite number that is Gary Aldridge.

@SanFranLefty: You beat me to it.

@hunkamonkiman: Don’t bother, I have it right here: 1=1