When I Say Nigger, I Feel Guilty 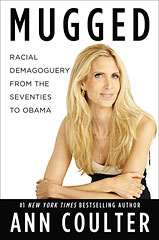 Title: “Mugged: Racial Demagoguery from the Seventies to Obama”

Blurb: “Going where few authors would dare, Coulter explores the racial demagoguery that has mugged America since the early seventies. She shines the light of truth on cases ranging from Tawana Brawley, Lemrick Nelson, and Howard Beach, NY, to the LA riots and the Duke lacrosse scandal. And she shows how the 2012 Obama campaign is going to inspire the greatest racial guilt mongering of all time.”

“If I had any doubts about the need for this book, all I had to do was open up my morning paper and see the syndicated column by Leonard Pitts — headline teased to the front page — about the sighting of a ‘Don’t Re-Nig’ bumper sticker.

“Pitts, who bravely battles racism every day whether he needs to or not, quotes a woman he doesn’t name who says she saw such a bumper sticker, and then uses it to launch an entire column on pervasive Republican racism. No effort to determine if it was true, it’s second or third-hand by the time it gets to you the reader, but if it allows to let liberals put the N word in play in the service of Obama’s reelection, who cares?”

After Lefties raised a self-righteous fuss over the totally non-racist sticker, it was removed. And, um, replaced by this…

See what he did there? How clever!

But hey, stickermeister Stumpy is obviously a crank. Ann Coulter, on the other hand, makes a good living pandering to people who agree with Stumpy, but can’t bring themselves to admit it.

There’s a ginormous billboard I pass every week on my way back to the Pencil from ONC that says “NOBO in NOV”. I don’t agree with the message, but find that it catches my eye every week. Then it goes on in rambling subheader font not suitable for billboards on a busy interstate to say something about “vote for religious tolerance and a return to Judeo-Christian values”, at which point I nearly drive off onto the shoulder.

By mid-November it should return to its appeal for you to stop at Adult World on Rt.15.

Tough to believe there might be any other person more qualified than Ann Coulter to walk us through (and shine the light of truth on) the history and plight of America’s African American population.

I know I personally relieved half a lifetime’s worth of guilt when I pulled that O-lever back in 2008. Maybe If I give it another yank in 2012 I can alleviate the other half.

Except the Dead Parrot is the N-word.

Maybe if we ignore her she’ll go away.

Is that Franch for bad posture?

@Tommmcatt May Just Have Some MJ In His System As Well, So What?: Chance’d be a fine thing.

I’m sitting at home waiting for the plumber (water heater died) and watching SFL’s 49ers domimate the Jets. Sanchez looks terrible. I womder if the Jets will put Jesus in at QB?

@Dodgerblue: If the water heater can’t be fixed I strongly urge replacing it with the tankless Rinnai continuous flow. You will be happy.

@Benedick: Tankless heaters are also good for clearing up floor space to carve a hole for hiding your meth millions.

@Benedick: Tankless heaters are great, but the main reason to stick with a water heater out here in earthquake land is that after the big one, if you properly disconnect the pilot light, you can use the contents of the tank as drinking water, and it’s enough to last a family a few days.

@Dodgerblue: I’m working, can’t watch the game. And I don’t want to discuss the Thursday night shitshow in Seattle, still in too much shock.

/returning to the saltmines

@SanFranLefty: Or just a plain ol’ power outage, as I realized during The Great Sandy Eggo Blackout. The candlelit shower was very romantic that night.

@nojo: An architect/builder friend recommended that we stick with the 40 gal tank over the tankless design — even though the tankless is now required in new homes under L.A. “Green” Code. You should hear this guy rant about the building inspectors assigned to the Green code — clueless old guys nearing retirement.

Ann Coulter is a “down ass bitch”, and “a bitch got books to sell”.

@Dodgerblue:
Tankless is fine if it is a new install. Uber expensive for retrofit.

TJ/ It took some getting used to, but bus drivers here are pretty friendly. There’s an occasional asshole, but there always is an asshole somewhere.

Yesterday I got on the bus, and the driver said, “Nice to see you again.” I vaguely remembered the guy, but he remembered me, and that was kinda nice. So…

Today I’m on the bus, and a different driver is chatting with some guy. They’re talking politics. The guy says, “Biden is calm, cool and collected.” I wanted to holler, “This is a BIG FUCKING DEAL,” but I didn’t. The driver agreed, and she started opining on the “idiot teabaggers.”

This is an interesting fucking place.

@Dodgerblue: Given the cost for the new tankless kit, payback on the capital investment is a long stretch. Then you have the exhaust issue to deal with and commensurate venting requirements. The new standard 40-gal tanks are plenty green. And you can turn them off on vacation. They must all be piezo starters now, too, obviating the crappy job of crawling around when you come back to relight the pilot.

@nojo: My ex-neighbor with the tankless heater and hiddie-holes dug into every wall, support beam, and the ground, would agree with you.

@I’m passing for white: Good luck with getting the full wine bottle. The fucking liquor laws in Washington suck ass. They are almost as bad as the ones in Pennsyltucky. Wash just got rid of the state-owned liquor stores, but the mark up on hard alcohol at the grocery and other stores this July made me and Mr. SFL realize on our last trip to the Pacific NW that we could open an amazingly profitable business that would consist of buying cases of random hard alcohol at the BevMo in Sacramento and then hauling ass north on I-5 and reselling it. Stupid 21st Amendment, how does it work?

@SanFranLefty: Stupid WA law has been a boon to the state-run stores on the Oregon side of the river.

@I’m passing for white: Are you in Seattle?

@Mistress Cynica: As a native Orygunian, there was a time when it was weird to see hard alcohol at the corner store and the supermarket.

Thankfully, that time has long passed.

@FlyingChainSaw: Yes, and we got a ultra low-NOx burner because of the annoying environmentalists here in smoggy So. Cal.

We put in a Rinnai in our old house and there were no construction issues. It was reasonable and for the first time we could fill the jumbo bathtub I insisted on buying. It was all very easy. A bit more complicated was installing the heat pump. But since we had old-fashioned forced air heating it piggybacked on to the furnace and was also surprisingly economical. As for drinking water, we have streams for that.

@Benedick: “we have streams for that.” We don’t. I have a water filter so our drinking water doesn’t taste like it comes from a swimming pool.

@Benedick: We have the Colorado River. It’s our sister and our daughter!

@Dodgerblue: The people here before us took their drinking water literally from the stream that runs behind the house. They then built a spring house up the hill, running a water line to the house. We, of course, have a well with a pump. We’re very fortunate. The water is delicious and plentiful.

@Benedick: You’re not, by any chance, sitting atop the Marcellus shale formation that the gas companies want to exploit through hydrofracking?

@Dodgerblue: We are almost at the eastern edge of said shale. It ends under the Catskill escarpment that fronts the Hudson. We are solidly in the middle of the Catskill Park. And since I live about a half mile from the first of NYC’s Catskill reservoirs I think the neighborhood is safe. The future of this region is water. We have an abundance of pure water that can only become more important over time. Fracking will happen further west, far from Woodstock’s trustbelt.

@Benedick: Good. My organization is trying to stop it unless/until it’s proven safe. BTW I was at a work retreat near Poughkeepsie earlier this year. Lots of rain.

@Dodgerblue: You should see how very beautiful this region is and how many NY lawyers own second homes: a potent mix. We have bald eagles at the reservoir. We have trustafarians in the hills. We have rock stars in the liquor stores. I pity Pennsylvania.

@nojo: You’re bathing in and drinking everyone’s hormones and countless other meds from the Rockies on down. Brita can’t fix that. Ask the Chesapeake watershed dead zones. And one of the main places that fucked up the Chesapeake (besides Perdue chicken farms) is Pennsylvania.

@Benedick: Is it from a natural spring?

@SanFranLefty: When I get paid, in what feels like a lifetime, I’m going to Fremont where Happy Hour lasts from 3-8 and EVO IPAs are $3.50. I’ll skip the wine, although I have seen a Total Wine & More near Kent.

@karen marie still has her eyes tight shut: Nearby

@Dodgerblue: This makes me incredibly sad.

@I’m passing for white: Yes. The mountain behind us is alive with water. It pours in torrents and floods my basement. It allows pugs to romp. And when I turn on the tap it tastes like cream.

@Benedick: It feeds the willow.

@I’m passing for white: Yes it does. Willow is 7ft.