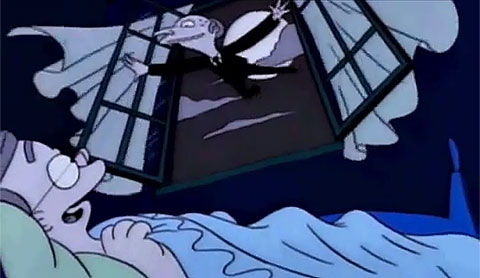 We’re being told by starry-eyed political commentators that with the selection of Paul Ryan, the election has become a civics geek’s wet dream: a stark choice between Governing Philosophies.

But that’s not why we laugh.

We laugh, because Paul Ryan is a Toady.

His high school classmates nailed it when they labeled him Biggest in their yearbook: Paul Ryan has been sucking up to Power his entire life.

He left backwoods Wisconsin as quickly as he could, seeking his destiny in Washington, D.C., which offered more powerful assholes to shove his face into. Once elected to Congress, Ryan practiced his Buttcheek Motorboating to the best of his ability, voting for any piece of crap his party demanded.

It was during this stretch — high school through Bush — that Paul Ryan was famously an Ayn Rand acolyte, although in the Teabagger Era he has learned to Ixnay on the Ayndray. And if you know anything about Ayn Rand, you know that she utterly worshiped Money and Power.

Objectivism wasn’t a philosophy. It was a catechism for Doctrinal Toadying.

Years ago, a friend disabused us of the naive notion that Wall Street holds Power. No, he explained, Wall Street is just Power’s Banker. Power doesn’t live in Manhattan. Power lives in Palm Springs.

As goes Manhattan, so goes D.C.: Paul Ryan holds no real power of his own, save as leader of the Court Eunuchs. Paul Ryan exists to do Mitt Romney’s bidding. Because Mitt Romney has the money. And everything Paul Ryan does is in service to Mitt Romney gathering and keeping as much money as possible.

The relationship isn’t, as some will tell you, between Figurehead and Power. It’s between Mr. Burns and Smithers.

This is ridiculously easy to demonstrate: When Mitt Romney sleeps, he dreams of more money.

And when Paul Ryan sleeps, he dreams of Mitt Romney.

Announcing a running mate a couple of weeks before the convention? Of course, AP and gang are trying to spin it.

Now he’s trying to cry to impress. Ryan is quite the weasel.

Rmoney and Ryan are the quintessential Republicans. The economics of Herbert Hoover, the ethics of Richard Nixon, and the hair of Ronald Reagan.

To go along with the Burns & Smithers meme, there’s this.

Don’t lose sight of the fact that Paul Ryan is a career government employee. How does that sit with the tea baggers?

Just glad the GOP horror show isn’t booked here, like it was in 2004. I gave wrong directions to so many idiots looking for “Ground Hero!” Yet another shitshow courtesy of Mayor-for-Life Bloomberg.

@BobCens:
I am still scratching my head over Texas teabagger darlin’ Ted Cruz:
Has all the bells and dog whistles
*long time gov’t employee.
*Trial lawyer for Chinese business interests.
*Born in Canada
* Cuban Father who fought against US supported Batiste regime with Castro.
(His daddy came to USA in 1956 didn’t become citizen until 2005)
The talk is a run for President 2016.

And while we’re there, Ryan 2016 doesn’t get much traction either, because of everybody who decided to sit out this round — knowing last summer that Obama was a lot more formidable than the wingnut party line was allowing.

Thus my year-old prediction of an Electoral College landslide: No special insight on my part. Just noticing what the Rationally Self-Interested Major Players are (or are not) doing.

@nojo:
“Born in Canada”
Yes, for many in Texas that’s like being born in Europe.

@Dodgerblue: Will his mistress work on the campaign?

@Tommmcatt May Just Have Some MJ In His System As Well, So What?: Which one? He just dumped the latest TV newsreader he was boffing.

@Dodgerblue: Maybe they should unionize…

@Dodgerblue: @Tommmcatt May Just Have Some MJ In His System As Well, So What?: Speaking of LA, here is a lovely song about your fair city.

@mellbell: The Dodgers and Lakers play this when they win.