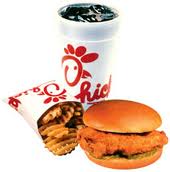 They just double down: “Instead of owning up to the fact that The Jim Henson Company stopped doing business with them because they’re overrun with bigots, [Chick-Fil-A] is making fake Facebook accounts to defend its honor on the social network. How do we know the accounts are fake? Just check out this back and forth on Chick-fil-A’s Facebook page between real, breathing people and “Abby Farle”, a Facebook account that was made 8 hours ago by a chicken PR flack with a stock image of a teenage girl as her profile picture:” [Gizmodo]

Today in Shallow: Why yes, I am now running Mountain Lion having just downloaded it. And yes it is awesome. Thank you for asking.

@Benedick: Speaking of unrelated items, who is depicted in your avatar?

I still want to throw things at the straight people I know who quote that Jonathan Merritt article in The Atlantic about how we should all just get along and buy shit from people who want to deny us our civil rights don’t believe the same things we do.

Yeah, that article irritates me, since what’s happening with Chick-fil-A is *exactly* what the wingnuts claim makes anti-discrimination laws unnecessary. It’s the entire foundation of “market-based” social policy, FFS – why are they opposed to people making decisions?

According to sources, the Queer-Hatin’ Cordon Bleu is merely the first of Chick-fil-A’s new family values menu which is set to include the AIDS Is God’s Curse chicken nugget combo and the Fags Caused 9/11 strawberry fruit smoothie.

@rptrcub: That is me in the Grundarfjörður Pride. It’s timed to coincide with the end of the marauding season when everyone returns home to divide the spoils pillaged from the English which, as you might imagine, doesn’t amount to much: cold Indian take-out and boxed DVDs of past seasons of Friends. I told the lads, next season we’re heading for Boca Raton.

By the by, did we see that Merritt got outed by his ex boyfriend some random vicar?

@Benedick: I could use a horned helmet in Court.

BTW, did you see the letter from the Mayor of Boston telling Chick-Fil-A to fuck off? http://consumerist.com/2012/07/heres-the-letter-where-boston-mayor-tells-chick-fil-a-to-stay-the-cluck-out-of-his-town.html

@Dodgerblue: I’m driving to Boston tomorrow to propose to him. What is a jumbotron and why do I need it? The hubby has become unaccountably bitter.