How To Be A Dick

In today’s lesson on how to be a dick, we examine a technique that the Roman rhetorician Tacitus referred to as Homo non potest ferre cantus, and which consists of running an attack ad against your opponent that features critical factoids displayed onscreen while a soundtrack plays in the background consisting of your opponent’s tortured, midnight-feline-mating-call, massacre of a beloved patriotic tune: 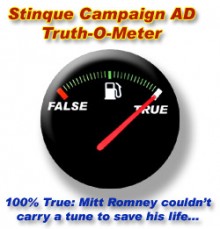 (VIA: The New York Times)

Romney campaign inserts video of Obama singing Al Green tune. Tries to spin it as “Obama is Un-American” with factoids. No one reads the factoids because they are enchanted by Obama’s singing voice.

@matador1015: And Gay Males, first among them me. And it would shoot up, believe me.

@Tommmcatt May Just Have Some MJ In His System As Well, So What?: So a singing Obama may just be the “log” the Log Cabin Republicans need?