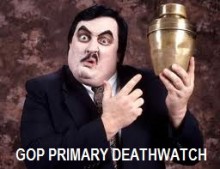 Supposedly, the Teabaggers were all about the munnie.  (The thinly veiled racism and suggestions that Black Eagle was a double-agent for Satan Himself?  Mere window-dressing!)  The real trouble with Obamacare (in their minds, fevered by efforts to suppress baser instincts, anyhow) was that people would be forced to pay their own money to do something… um… useful for people who (a) were not themselves and (b) had not-so-much money.  And, also, the go-along-to-get-along, give-and-take of Washington (or any negotiation process in the Real World) was a non-starter for your average Liptonite.

The beginning of the end, if I recall right, was the explanation he gave for voting for No Child Left Behind at a CNN debate in Arizona.  When he declared that he erred by voting for it, and explained that it was a  take-one-for-the-team move on his part, his fate was more or less sealed.  He committed the cardinal sin — he did something that dirty hippie liberals might actually support.  And that would make some people pay just a little bit more to live in a little bit more civilized world.

Other impurities were raised, but that was the biggie.  After that, not even the army of Thumpers (including the Duggars, who in some smaller countries could, if they were armed, constitute AN ACTUAL ARMY) that could be counted on to support a contraception-free world could save him.

Wisconsin was the last straw.  There, the GOP voters have been whipped up into a frenzy over the past year.  They want to hang a donkey head on a wall (right next to the stuffed ten-pointer they bagged last November), and have someone who was as conservative as possible to do it.  And who do they choose?  Romney.

And thus the irony, of course, is that in a race where a premium was put on ideological purity, the all-but-certain nominee is about as pure as an Atlantic City pitboss.  One will have to see whether Newt can break, say, 35% in upcoming primaries, on account of seething Republican activists who cannot stand Mittens.  It says here, however, that this is extremely unlikely to happen, given that Newt’s sugardaddy (a glorified Las Vegas pitboss) has thrown in the towel.

Yet Newtie is pressing on in his quest to prove that HE IS THE SMARTEST MAN WHO EVER LIVED.  Which is quite a gig, if you think about it.  (And he has — a great deal.)  And Dr. Paul hasn’t taken a hint for the past eight years or so, and thus cannot be expected to do so now.

Anyway: For Rick, the road ends here.  For all the humor (toilet and otherwise) he brought us, in the words of Mrs. Parker, Santorum “wasn’t just plain terrible… [but] was fancy terrible. [He] was terrible with raisins in it.”

So let us send him off in style.  [What supplies we would need to do so — an ultrasound machine (complete with probe and gel)? a bottle of Ex-Lax? a strategically-placed sweater vest? — is an appropriate subject for debate.]

A fancy reed boat so he can travel down Denial in style.

TJ and good morning Stinquers – you may be waking to a sh*tstorm of water and damage in the Indian Ocean region. Felt the 8.7 in my office building…

@Dodgerblue: dodgers won again. is billingsley pitching today? he threw nasty heat the size of little tiny aspirins at the padres last friday. direct tv gave me free dodgers games last weekend and may have got me hooked on the extra innings package for $50/month. if i drop the larry flint home movie channel, i’ll break even and can catch all dodgers games this year. i haven’t listened to vin scully lately and forgot how he is by far the best baseball announcer around, so it’s worth it just to hear vin. how bout the superstar dodgers staff, mattingly, honeycutt (from right here in east tennessee), and davey lopes? just gotta find some relief pitching now.

@Nabisco: Why the asterisk? Are we being watched? Is Hillary texting about us?

@jwmcsame: @Nabisco: Yes, Bills is on the hill tonight vs Willie Stargell and Dave Parker . . . anyhow, against Nabisco’s Pirates. I’m going to the game; I got some good medical news yesterday and am going to celebrate with Dodger Dogs and overpriced beer. So if you see a tall guy barfing over the railing at the bottom of the Reserved section, just off the plate, that would be me.

BREAKING – ZIMMERMANN to be charged.

@redmanlaw: Almost beat you this time, but I had to find a badge.

@redmanlaw: Voluntary manslaughter? I don’t see a Murder 1 charge here. Do they have second degree murder in Fla?

@Dodgerblue: They dropped Murder 1 when they dropped the requisite Grand Jury. I’m betting on manslaughter.