Both Sides Do It 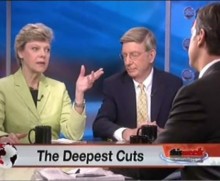 One of the most aggravating things about the “liberal” media is their claim that “both sides do it” – as if this somehow forgives the insane behaviors of the modern GOP. From David Gregory to David Brooks to Charlie Rose, this mantra is a Villager staple. Here are a few literally false equivalencies for you:

Remember when those Code Pink activists showed up at a Bush rally with semiautomatic weapons?

Remember when that liberal activist blew up a federal building after Bush started the Iraq War?

Remember back in 1989 when disaffected Democrats dressed up as WPA workers and held up posters of George HW Bush dressed as Lord Fauntleroy?

Remember when Clinton invaded Somalia and we were there for 10 years?

Remember when Walter Mondale went hunting, wandered onto an ashram, and shot that yogi in the face?

Remember when that gang of liberals called Newt Gingrich a “honky” as he entered the Capitol?

Remember when Janeane Garofalo told that black caller to “take the bone out of [his] nose”?

Remember when there was a major disaster and it turned out that Bill Clinton’s head of FEMA was just somebody’s college roommate?

Remember when those black high school kids hung the effigy of a white boy from a tree?

Remember when Bill Clinton climbed onto the wreckage of the Murrah Building and promised to bring those responsible to justice?

Remember when that liberal edited a video and got W’s HHS director fired?

Remember when that liberal radio host said that a white Eagles quarterback was promoted by the media only because he was white?

Remember when that Democrat-controlled House tried to gut funding for mammograms and pap smears?

Make no mistake – these are horrible people:

Steve in Manhattan
1:00 pm • Sunday • March 25, 2012
comment »
Choose Your Delusion
The Cat is Lost in the Negative Space This is Awkward …
10 Comments
ManchuCandidate

Getting context and nuance is a blessing and a curse at the same time.

Those who get it, understand the infinite shades of grey. Those who don’t spend a lifetime thinking that a kiss on the cheek is the same as a full on kiss with tongue from their uncle but the problem is that there are more of them then there are of those that get it and they think you’re just splitting hairs (most of the time they’ll be wrong.)

The one on my mind right now is wingnuts playing up the New Black Panthers, who have offered a $10,000 bounty for Zimmerman’s capture. This is being taken as evidence that the Left is fucking nuts.

Not mentioned: The New Black Panthers — both of them — have absolutely no credibility on the Left. Their minor prominence is entirely due to Wingnut promotion.

(And sure, why not? As long as we can tie the Westboro Clown Troupe to national Republicans, we’ll call it even.)

The best case that can be made for Both Sides Do It is against Bill Maher. But Maher has nowhere near the influence of Rush, or the next five batters in the Wingnut Lineup. Even Olbermann doesn’t have O’Reilly’s influence — and that was before he dived into oblivion Current.

@nojo: Funny – watching TIVOed Maher right now – and the reason his transgressions are minor are that he’s a fucking comedian … he’s in it for laughs, not for power.

@blogenfreude: Rush claims he’s a comedian and entertainer, too.

You’re welcome to dispute that, but even if we grant the point, nothing changes. Maher has his fans, but they’re not legion.

As for the Black Panthers…there are what, three of them? All over Twitter, black orgs and youth projects and local and national “Million Hoodies” groups are saying what a bad idea it is to encourage vigilantism to fight vigilantism. And it *is* a bad idea. You can’t legally bounty-hunt if there is no bounty, as I said. Zimmerman is neither a bail-jumper nor a fugitive from justice. Yet.

@nojo: Difference to me is Rush wants to change things, Maher merely observes. But hey – reasonable people can differ, unless we’re conservatives.

@litbrit: That Black Panther thing? I would look SO dope in cammies and a red beret.

Maher points out that both sides are not equal. He will repeatedly throughout the season point out the shear volume of right wing loonies far out weighs the left wing loonies and that the right wingers are much more prone to violence. Wishing someone to be murdered is a far cry from pointing out someone’s stupidity.