Stinque
Home Latest Comments Log in
If it smells, we’re on it.
Stinque
Assholes, they do vex us.
Product Placement 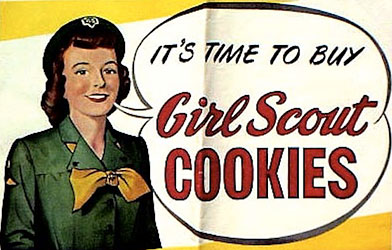 Our guest columnist is Bob Morris, Republican representative for the Great State of Indiana, the only member of the state House who refused to sign a resolution celebrating the Girl Scouts centennial.

Members of the Republic Caucus

This past week I was asked to sign a House Resolution recognizing the 100th Anniversary of Girl Scouts of America. After talking to some well-informed constituents, I did a small amount of web-based research, and what I found is disturbing. The Girl Scouts of America and their worldwide partner, World Association of Girl Guides and Girl Scouts (WAGGGS), have entered into a close strategic affiliation with Planned Parenthood. You will not find evidence of this on the GSA/WAGGGS website — in fact, the websites of these two organizations explicitly deny funding Planned Parenthood.

Many parents are abandoning the Girl Scouts because they promote homosexual lifestyles. In fact, the Girl Scouts education seminar girls are directed to study the example of role models. Of the fifty role models listed, only three have a briefly-mentioned religious background — all the rest are feminists, lesbians, or Communists. World Net Daily, in a May 2009 article, states that Girl Scout Troops are no longer allowed to pray or sing traditional Christmas Carols.

Boys who decide to claim a “transgender” or cross-dressing life-style are permitted to become a member of a Girl Scout troop, performing crafts with the girls and participate in overnight and camping activities — just like any real girl. The fact that the Honorary President of Girl Scouts of America is Michelle Obama, and the Obama’s are radically pro-abortion and vigorously support the agenda of Planned Parenthood, should give each of us reason to pause before our individual or collective endorsement of the organization.

As members of the Indiana House of Representatives, we must be wise before we use the credibility and respect of the “Peoples’ House” to extend legitimacy to a radicalized organization. The Girl Scouts of America stand in a strong tradition that reflects with fidelity the traditional values of our homes and our families. The tradition extends from coast-to-coast and back through the past one hundred years. That said, I challenge each of you to examine these matters more closely before you extend your name and your reputation to endorse a group that has been subverted in the name of liberal progressive politics and the destruction of traditional American family values.

I have two daughters who have been active in the Girl Scouts of Limberlost Council in Northeastern Indiana. Now that I am aware of the influence of Planned Parenthood within GSA and other surprisingly radical policies of GSA, my two daughters will instead become active in American Heritage Girls Little Flowers organization. In this traditional group they will learn about values and principles that will not confuse their conservative Hoosier upbringing.

I have been told that, as of today, I am the only member not supporting the Girl Scout Resolution.

I challenge each of you to examine these matters and to decide carefully whether or not to sign the resolution.

only the toughest of the tough pick on the girl scouts. this teabagger hates the girl scouts because they let planned parenthood discuss pussy with little girls, yet he signs his up for something called the little flowers organization. sounds like he is grooming them for his own personal use. the poor girls need to run away fast.

Let’s have a look at that…

A guide written for young people living with HIV to help them understand their rights, and live healthy, happy and sexually fulfilling lives.

Young people living with HIV may feel that sex is just not an option, but this need not be the case.

It explores how human rights and sexual well-being are related and suggests strategies to help them make decisions about dating, relationships, sex and parenthood.

“Young People” in the text-only version is defined as “Those who are aged between 10-24 years.” Which is probably unfortunate, but so is describing it merely as a “sex education pamphlet”.

Bob Morris is an idiot. There’s plenty on the intertubes to debunk this email hoax
And even if the event happened as it has been represented by the batwing right this is the premise of the pamphlet:

IPPF works towards a world where women, men
and young people everywhere have control over
their own bodies, and therefore their destinies.
A world where they are free to choose parenthood
or not; free to decide how many children they
will have and when; free to pursue healthy sexual
lives without fear of unwanted pregnancies and
sexually transmitted infections, including HIV.
A world where gender or sexuality are no longer a
source of inequality or stigma. We will not retreat
from doing everything we can to safeguard these
important choices and rights for current and
future generations.

God, there’s so much wrong here, I don’t even know where to begin.

First, thanks to texrednface for linking to one of the sites debunking that Planned Parenthood/UN story. Neither GSUSA nor WAGGGS have any affiliation with Planned Parenthood, in any way, shape or form. GSUSA writes all its own training materials and doesn’t get curriculum materials from any other organization. Period.

Not only is the WND article about praying or singing Christmas carols wrong, one of the few badges/programs that survived last year’s overhaul is the My Promise, My Faith program where girls from Daisy to Ambassador can earn a badge based on their own religion. Three of the delegates from our counsel attended a training program for it at the national convention in November.

Michelle Obama is the Honorary Chair because EVERY first lady is the honorary chair of GSUSA.

Fuck that fucking idiot with a fucksaw.

Some asshole “lawmakers” better get with the program, or they’re gonna receive a fresh box of Mint Cyanidies.

@texrednface: Honey, I got thrown out of the Cubs (pre-Scouts in Limeyland) for laughing at the sacred invocation of Akela (don’t ask). Around here that’s a badge of merit.

We are aware that Girl Scout Cookies are one of the 10 foods one should never eat. Sodium/sugar/trans fats/grease. Another is Campbell’s soup. And… I forget.

@Benedick: We’ve got Cubs too. I may have lasted one meeting. Or not even that. Band was more fun, anyway.

@nojo: Remember Weblos? I was in that part of scouting for years.

@Tommmcatt Be Fat, And That Be That: I remember the name Webelos (if I recall the spelling), but I kept my distance, and I can’t think of any friends who joined any of that. No reason either way — it just wasn’t part of my crowd.

@nojo: I made it to Star Scout before my hippie gene kicked in. I mainly enjoyed the pyromania.

@Walking Still: My crew went through a model-rocket phase without benefit of Adult Supervision. Except when Dad needed to drive us to an out-of-town meadow for launching.

This explains why my brother-in-law would not buy from my daughter. He seems like a normal human out in public.

@DElurker: Ohh, look out. TJ/ Jamie Sommers /TJ is the resident Girl Scout goddess/ cookie dealer, unless you can beat her to the punch and throw in free shipping….