Stinque
Home Latest Comments Log in
If it smells, we’re on it.
Stinque
Prepare to Meet Thy Doomscroll.
General Disarray

So How Many Jobs did Jimmy Carter Create?

This morning, NOJO, our resident blogaholic (the glue who holds Stinque together, in much the same way Santorum binds the evangelical community) took a look at Mitt Romney’s claim to have created 100,000 jobs and concluded that he was a vulture who fired people with good, well paying jobs, replaced those jobs with thankless, low paid retail positions and in the process enriched himself beyond the dreams of avarice.

NOJO was being far too kind.

A closer examination of Romney’s claim to have created thousands of jobs reveals that, like many of his recent statements, it relies on a series of lies by omission. Take, for instance, the fact that Romney conveniently fails to subtract from his total the job losses that his company caused. As Forbes reports:

Then there are the job losses at the many companies Bain acquired. FactCheck credits reports in the New York Times and Politico for flagging the following cuts or displacements: 385 jobs lost at American Pad & Paper; 1,900 cuts or relocations at Dade International; more than 2,100 workers laid off from DDI Corp.; 2,500 cuts at Clear Channel Communications; and 3,400 at KB Toys.

That’s about 10,000 firings right there, and that’s from the relatively succesful companies that Bain acquired. It doesn’t count the companies that went bankrupt (and on which Bain made millions anyway).

But there’s also a further bit of fuzzy math that underlies Romney’s claims:

Where does that claim of creating 100,000 jobs come from? Glenn Kessler (Via Paul Krugman):

Well, Glenn Kessler of The Washington Post got an answer from the Romney campaign. It’s the sum of job gains at three companies that Mr. Romney “helped to start or grow”: Staples, The Sports Authority and Domino’s.

Mr. Kessler immediately pointed out two problems with this tally. It’s “based on current employment figures, not the period when Romney worked at Bain,”

So the revelation of just how Romney cooked up his numbers got me wondering: if we were to use Mitt Romney’s principles of accounting, where all jobs created ’till…well… forever count towards your total, but none of the losses do, how many jobs is president Jimmy Carter responsible for creating? The math’s not that hard. You just need to look at the size of the U.S. labor force in 1976 and compare it to the labor force today. Here’s a helpful graph: 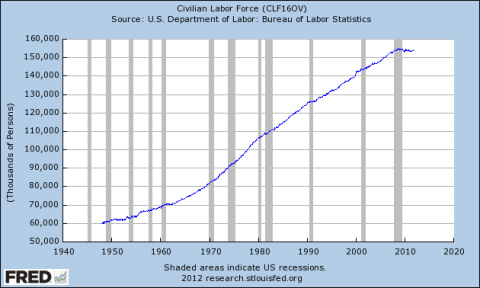 And the answer? Following Mitt Romney certified accounting principles, we can comfortably show that Jimmy Carter created some 65 million jobs as president (about 10,000,000 more than Reagan). Not too shabby for a peanut farmer from Georgia!

It’s not just Mittens would run as a “CEO” preznit, it’s that he’s also a bad caricature of a CEO much like his words, his deeds and that fake smile of his. Is he even human?

Man, if Mittens wins the GOPer Primary… it will be a long summer for the GOPers heh.

Romney is to job creation what Jeffrey Dahmer is to culinary arts.

@FlyingChainSaw: Although to be fair, Mittens only cost an arm and a leg, not the rest of the parts.

As if the Repubs care about facts.

At least Ross Perot earned his filthy lucre assembling a well-paid army of geeks. When was the last time Republicans ran an honest-to-gosh industrialist?