You Never Go Back 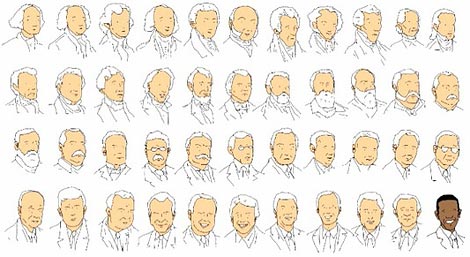 Herman Cain’s victory in the Florida Straw Poll is, in itself, meaningless. Like its Iowa counterpart, the Florida scheme is pay-to-play — it doesn’t tell you anything about a candidate’s electoral support. What it reveals, at most, is a candidate’s financial and organizational cojones.

Still, it’s not good for your Indomitability Narrative if you can’t even buy a fake election. Mitt Romney wasn’t even in town for the fake ballot — a clever dodge — and the fake vote is being read mainly as Rick Perry’s failure to triumph. Cain didn’t so much capture hearts and minds as provide safe harbor for a protest vote — aided on the sly by Mitt’s bucks, it’s being rumored.

But with so many also-rans to choose from, why Herman Cain? Dunno. And, for present purposes, we don’t care to overthink it.

Rather, let us observe that on this day of Our Lord, September Twenty-Six, Two Thousand Eleven, it was at least conceivable — not plausible, but conceivable — that of the two major-party candidates for Preznit of These United States, only one of their four parents would be Caucasian.

We’re not big on American Exceptionalism. But that would definitely be exceptional for America.

Winning a $traw Poll is the same as one declaring themselves Emperor of the Internet.

Free pizza for the win.

His 9-9-9 plan really spoke to me at the last debate. I was captivated by its boldness and stirred by the prospect of taking our country back from… oh wait.

Charles Curtis, who was of Kaw tribal descent, was Herbert Hoover’s vice president.

If by some miracle Cain did win the nomination, how would the most Neanderthal members of the Tea Party take the news? (Unless of course they went into denial and insisted that McCain was running again.)

Bush the first was more of an ashy grey color.

@redmanlaw: I would give that achievement to Coolidge, but Ronnie’s on the list.