Stinque
Home Latest Comments Log in
If it smells, we’re on it.
Stinque
Cassandra was right.
Meet the New Boss 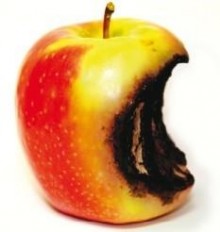 The news came out earlier this week that in July an iPhone 5 prototype was allegedly “lost” at a San Francisco tequila bar in the Mission District.  While the more cynical among us may have figured the story was a publicity stunt pulled by Apple, the story has now taken a rather disturbing turn.

SF Weekly, one of the alternative weekly papers here, broke the news yesterday that indicates Steve Jobs may have left at a good time, because the company has stepped in to a big pile of dog shit, and has pulled the San Francisco Police Department into the poo.

Apparently the Apple engineers tracked the lost prototype to a house in Bernal Heights, which is right up the hill from the Mission.  Sergio Calderon, age 22, lives in the home with his family.

He told SF Weekly that one July evening, six men carrying badges knocked on his front door and said, “Hey Sergio, we’re from the San Francisco Police Department.” The men asked him if he had been at the bar earlier in the week (he had), and told him that GPS had traced a lost phone to his house.

One of them said to Calderon, “Is everyone in this home an American citizen?” (they were, or they were legal immigrants), and told the family they could get in trouble.  The men asked to search the house, and Calderon agreed.  Two men searched his home, his computer, and his car, and found no iPhone.  One man who said his name was Tony offered Calderon $300 to hand over the phone and charges wouldn’t be pressed, and gave Calderon his card in case he had info.  Calderon gave the card to SF Weekly, and the reporters, in a fit of investigative reporting you don’t see these days, dialed the number. Lo and behold, who answered but Anthony Colon, a senior investigator at Apple.

So that is fucked up in and of itself. But it gets better. Or worse, if you’re a taxpayer in San Francisco already thinking of the potential liability The City is facing.

The reporters called the SFPD for comment. They were told by the SFPD spokesperson that there were no records or reports of any sort of search at Calderon’s house. Well that’s weird, as anytime SFPD stop to take a piss or get a breakfast taco, there is a record of it. Needless to say, there’s a record made when they search a house.

Later in the day, the spokesperson called the paper back and said, oh, our bad, yes, three or four SFPD plainclothes officers “assisted” Apple investigators in their trip to Calderon’s home, but they “did not go inside the house,” and instead waited outside the home, while Apple investigators, saying they were the police, searched Calderon’s home.

Impersonating a police officer is a misdemeanor offense in California, and while these cops were doing the bidding of a corporation’s security force, a gang war has been heating up in the Mission, with multiple residents killed, including an innocent restaurant cook on a smoke break who was mistaken for being a rival gang member.

Welcome to the Plutocracy.

Apple doesn’t need to pull publicity stunts. But your cynicism is well-spent on their legal stunts.

(typing on my wireless fab aluminum keyboard which is so responsive and gorgeous it is a total joy to use and even when I’m stuck with my work I still want to sit down with Steve and ask him where the fuck does he get those turtlenecks.

That kind of Apple.

This evening’s explanation from the SFPD is that the cops were there just to do a friendly “civil stand by” in case some shit went down. As more than one commenter on the Chronicle pointed out, good luck getting a cop to do a civil stand by when CPS is removing kids from a home or when removing belongings from an ex’s apartment. Or for that matter, good luck getting the SFPD to give a shit when you’re the victim of identity theft or credit card fraud. Mr. SFL has first-hand experience dealing with the SFPD on ID theft, which involved them refusing to take a report or provide any assistance.

Sergio should have a nervous break down and sue Apple for its $67 billion. The cop who asked if they were all Americans should be kicked to death or have his citizenship yanked and be shipped to Somalia.