Worse than a bad joke… 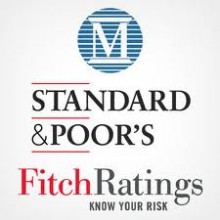 Standard & Poors’ recent decision to downgrade the United States credit rating from AAA to a AA+ has caused not a little handwringing among the chattering classes. The move dominated the financial news over the weekend, and investors the world over are wondering just what it means for the future borrowing costs of the world’s largest economy.

Which is pretty silly.

Because truth be told, in the grand scheme of things and once the dust settles, Standard & Poor’s rating of United States debt will prove about as relevant to investors as an unknown blogger’s review of the latest Hollywood blockbuster is to the movie industry as a whole. Which is to say: about none at all. Indeed, it’s a mystery why the the rating downgrade caused any sort of flare up at all, given Standard and Poor’s miserable track record issuing ratings over the past few years. As both Paul Krugman and Daniel Gross have pointed out in recent columns, Standard & Poors’ poor judgment in assessing the risks of securitized mortgage debt helped enable the 2008 economic collapse. Krugman is amazed at the Chutzpah:

America’s large budget deficit is, after all, primarily the result of the economic slump that followed the 2008 financial crisis. And S.& P., along with its sister rating agencies, played a major role in causing that crisis, by giving AAA ratings to mortgage-backed assets that have since turned into toxic waste.

Nor did the bad judgment stop there. Notoriously, S.& P. gave Lehman Brothers, whose collapse triggered a global panic, an A rating right up to the month of its demise. And how did the rating agency react after this A-rated firm went bankrupt? By issuing a report denying that it had done anything wrong.

So these people are now pronouncing on the creditworthiness of the United States of America?

And Gross reminds us that S&P’s ratings of sovereign debt are both capricous and irrelevant:

S&P, which covered itself in a substance other than glory during the mortgage crisis, may have a poor record and strange methodology when it comes to sovereign ratings. France, which has a far higher debt per capita ratio than the U.S., still enjoys a AAA rating. And a downgrade, alone, doesn’t mean U.S. interest rates will spike — on Monday or at any time in the future. Japan’s credit rating was downgraded several years ago, when the interest rates its government paid on bonds was already extremely low, and they’ve generally trended lower in the years since

My personal view is that, given the rating agencies’ dysmal performance throught the 2000’s, the current move by Standard is little more than an attempt to appear “serious, prudent” and “conservative” by issuing a “shocking” judgement that, on closer examination, looks to have been arrived at through the arduous, precise and scientific process of dilligently exaggerating currently fashionable cliches. Because S&P’s downgrade of U.S. debt is an obvious and laughably transparent over-correction. Having given Lehman and the Subprime Mortgage market an undeserved vote of confidence just before they collapsed, Standard & Poor’s seeks to repair its reputation by issuing the United States and undeserved downgrade. Yet as the driver who swerves left to avoid a ditch well knows, over-correction can just as surely leave you stranded in a ditch on the opposite side. The collapse of Lehman and the securitized mortgage market revealed a corrupt, incestuous relationship existed between the ratings agencies and the debt issuers to the point that the former were unable or unwilling to perform their job. What we see here is the little man behind the curtain, imploring us to ignore the little man behind the curtain, even as he hurriedly speaks those words into a microphone and frantically turns dials and flips switches. And if there were still some doubt that Standard and Poor’s assessment of U.S. debt is a joke, the revelation that the agency crunched the debt reduction numbers wrong to begin with should settle it:

Before downgrading U.S. debt, S.& P. sent a preliminary draft of its press release to the U.S. Treasury. Officials there quickly spotted a $2 trillion error in S.& P.’s calculations. And the error was the kind of thing any budget expert should have gotten right. After discussion, S.& P. conceded that it was wrong — and downgraded America anyway, after removing some of the economic analysis from its report.

As I write this, the markets are in turmoil. That’s not too surprising. In the short term the stock market reflects a casino mentality as traders attempt to gauge investor mood and market direction in hopes of making a quick killing. The long term trends should remain relatively unaffected after the inital rumblings subside. That’s not to say everything’s hunky dory with the nation’s finances, but the long-term trends are as unaffected by Standard & Poor’s rating as a freight train smacking a butterfly. Just ask Japan.

Good time for a public (kabuki) investigation into the role rating agencies played in the subprime mess, no?

Not that most of us here (anyway) didn’t know about soon after the fallout began (or way before in the case of some folks.)

Some institutional investors (old fogy types) legally must invest only in AAA instruments. That leaves out US, but includes Finland, Germany, Sweden, UK, France and the Netherlands. Of course, they are socialist countries.

And what’s more, the markets are basically laughing at Standard and Poors, even as they panic.

Carnage in stock markets as I write — and all of the headlines I see attribute it to S&P’s downgrade.

They really are trying to make my head explode, aren’t they?

Once again: S&P declared that US debt is no longer a safe investment; yet investors are piling into US debt, not out of it, driving the 10-year interest rate below 2.4%. This amounts to a massive market rejection of S&P’s concerns.

The “signature” of debt concerns should be stock and bond prices both falling; what we actually see is those prices moving in opposite directions. And that’s normally the signature of concerns about a weak economy and deflation risk

Actually the markets are trending downwards in response to disasterly revised GDP growth data released on July 29th, which shows that the economy has ground to a halt and is teetering on the edge of another recession–as if the last one actually ended for most people.

Investors seem to be waking up to the fact that you can’t have an economy that’s 70% based on consumer spending when the goal of your fiscal policy is to exterminate the middle class and the poor. Corporations and the rich are hoarding all their trillion$, and the middle class and poor are reluctant or unable to spend, which has caused a demand shock.

Our entire deeply stupid kuntree is now like Airport ’75. “THERE’S NOBODY FLYING THE PLANE!!1!”

@BobCens: I read somewhere over the weekend that some of those institutional investors can change their rules on the fly, excluding Treasuries from the AAA policies. Your mattress may vary.

Dow closed down 631, NYT says Rick Perry will soon announce for Prez. I’m going back to the Sierras.

@Dodgerblue: My IRA account is down $20K from this time a week ago–and I’m in balanced, low-risk investments. I’ll be running by the grocery store to stock up on more rice and beans before the price triples.

@mellbell: Yeah, that’s not an insignificant percentage of the total. I’m 50, and have a much lower net worth than I had a 40. I’m loading up on saturated fats and cholesterol, hoping to have a massive coronary before the money runs out.

@Dodgerblue: @Mistress Cynica: I made the mistake of picking today to be the day that I signed up for electronic notifications instead of the forests of trees that my 403(b) company sends me. Christ almighty, it went down 15% from the dollar value it had three weeks ago when I rolled over a bunch of random accounts at various former employers. Apparently I will be working until I’m 85 or drop dead, whatever comes first.

@Mistress Cynica: @SanFranLefty: Back in the 2000s, I checked with glee at the rate my tens of thousands in the IRA were growing. Since the New Depression (no, not the musical trend of the 90s), I just look away.

We opened up an account for one of the spawn in early 2000, with fairly healthy contributions from lots of family members. Literally a week later the tech bubble burst and his fund had lost half its value. Eleven years on, it has mostly clawed its way back – to the original investmnet.

@Nabisco: Jeebus Christ, it’s the first inning and the ‘Beeskos are beating the Lefties 2-0. You able to watch the game on the tubez from NotTibet?

@SanFranLefty: Watashi wa Nippon ni imasu but yeah, I actually signed up for the MLB iPad app so I can stream audio. Problem is that most of the games are when I’m at work (like now), and they don’t have wee-fee in the Fortress.