Stinque
Home Latest Comments Log in
If it smells, we’re on it.
Stinque
This is America.
Some of My Best Friends 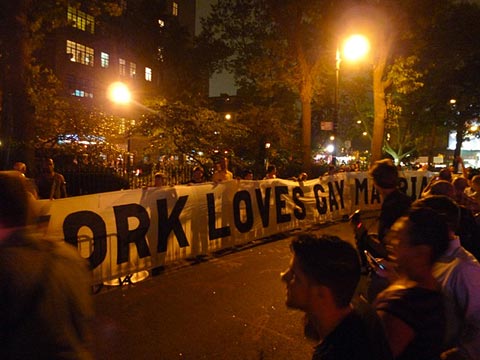 Forty-three years after I walked past the Stonewall Inn without noticing that anything was going on (I had a date) marriage equality comes to New York. I think I can speak for many of us when I state that this is something I never expected to see happen in my lifetime.

Another thing I never thought I’d see: The Times has something interesting to say. 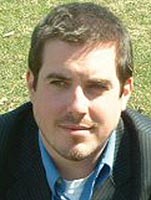 And on this happy day, let’s stop to remember Jason West.

Mayor of New Paltz, a village in the Hudson Valley who, in 2004, married two dozen or so same-sex couples, igniting a firestorm of condemnation and praise, depending on which side your bread was buttered. A house painter by trade (could he get more dreamy?), local-born and raised, Jason is poised to drop a few pounds and take his place among the new generation of Democratic leaders.

This was onstage at the Alvin the year Jason was born.

Wonder if Spitzer, had he not resigned in disgrace, would have pushed as hard?

It’s wonderful to have something good happen! Especially when it’s something so very long overdue.

Woah, I’d let him strip my undercoat and prime my lacquer.

Costumes (look how they move!) by Theoni Aldredge.

Are we all applauding? Hear how the end rhymes in Tomorrow land on dipthongs: day, way, say, frowned upon by lyricists. To sing them you have to land on wah and right as the note cuts off go to ee. Tricky. This creates the illusion of a mixed vowel having been sung. If you think it’s easy, when the masterful D Loudon does it at the end she goes flat.

But Andrea McArdle slams the high notes out of the field. Her passagio from top to bottom is all one piece, no break, flawless. That, my dears, is known as ‘belting’. She’s as natural as Garland. It’s a sound and style that suggests the castrati of the baroque opera.

Speaking of which here, as point of reference, is a countertenor (since we can’t castrate boy singers any more, more’s the pity, as I’m sure some of our lady readers would agree. And a few of our gay readers too) is a duet from Handel’s Xerxes. The bint in the bad wig is Xerxes (a man), conqueror of the world. Her intersingertor is the voice to listen to, the countertenor. Plus the fucking balls-out thrilling song. But listen to how he echoes Andrea McA. Note the passagio. The opera was written to an Italian libretto but Nicholas Hytner (director) gets C Garden to translate it. Thing is, Italian doesn’t have the closed sounds of English or the diphthongs so it’s easier to sing. But has a harsh twang to my ear which is a bit of a trial.

Speaking of trials, the number with the little girls is a bit much but remember that they are sending up the idea of the American Dream by mocking an ad they’ve heard on the radio.

Easy Street was bliss times 4 in the theatre: the perfect song at the perfect spot given the perfect performance. Other examples of something so perfectly crafted is The Best of Times in La Cage, though in the original production Jerry Herman’s masterful song is given to a minor character, a mistake fixed in the recent revival, and the entrance of Dolly into the Harmonia Gardens in Hello Dolly (Hmm. Did Mr. Herman know something the rest of us don’t? BTW. Among the B’way generation now dying out, if you ask them what was the performance you most treasure, they tend to say Carol Channing in Hello Dolly. More than Merman in Gypsy) Wait. Brush Up Your Shakespeare does the same thing for Kiss Me Kate. In fact it’s the much desired 2nd Act slam we all aim for: eg. Send in The Clowns.

In this clip we see Dorothy Loudon as Miss Hannigan with Sven Svenson as Rooster, both of them now dead. This number stopped the show cold in its tracks every performance. Ms Loudon was a star no one ever heard of apart from anyone who ever worked with her or saw her perform. She was a woman of talent who made it through the minefield of the theatre. It left her paranoid and mean but this was one of the best performances in a musical I ever witnessed.

It’s only a sad echo of what took place in the theatre. But.. to be young was very heaven.

Why this show and Pride? Because it’s ridiculous, and optimistic in the commercial sense, made up of countless cliches that, when they all come together under the right circumstances, bring a sudden flush of hot tears and an access of joy.