Stinque
Home Latest Comments Log in
If it smells, we’re on it.
Stinque
America is a Death Cult.
Assholes 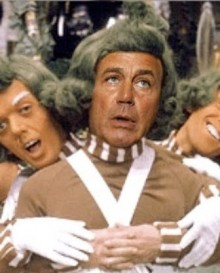 Are you guys excited about budget season? I know I am. John Boehner, who helps run the government for Willy Wonka, is leading the charge against the President’s Budget Request. It’s like March Madness, except it lasts far longer and there is no real winner. With the President planning to cut the Budget by $1.1 trillion over the next ten years, the Republicans are angry, because they hate budget cuts.

No. That’s not it. They hate when the President does anything. And they especially hate it when he threatens to reduce  fuel subsidies and  money for the Department of Defense.  So, they do what they do, which is to be assholes and cut stuff people enjoy, like jobs and truth and America. What do they want to kill this year?

1:  Like I said, jobs:  Boehner: if “jobs are lost, so be it.” Remember during the campaign when the GOP candidates were all like, “Where are the jobs?   Where are the jobs?”  Apparently, they didn’t really give a shit.

2.  Endangered Species Act Protection for gray wolves. Well, of course.  Wolves are assholes.  Also, this will save billions.

4.  Corporation for Public Broadcasting. Big Bird is a socialist.  Burt is gay. And, that show has way too many black people on it to not be a little scared when you watch it.

5.  Americorps. I was suprised, too. This the only branch of the military under the axe.

6.  Everything else you might like, if you are not a war junky, tea partier, or military contractor.

Oh, by the way, the GOP’s claim that they have  $100 billion in cuts is inflated, since they are comparing to Obama’s budget proposal for last year, not the actual budget.  So don’t worry!  We really only have to deal with about $60 billion in cuts, which will affect things that you only need if you are poor, middle class, or a wolf.  And, in the end,the GOP will really fuck up and we’ll have a 90s style government shut down, or, as differences stay irreconcilable, everything will be just the same as it was last year and we’ll continue funding at present levels under continuing resolutions.    Of course, even in the short term resolution, the GOP will still try to delist wolves.  and Boehner will still include a $450 million dollar earmark for his district.  Perfect.  Welcome to our shit government.

Congratulations for Dealing With It. I didn’t have the stamina.

Though I still don’t understand why he isn’t heading the Century 21 franchise in Binghamton, NY.

So… basically the GOPers want to live a fantasy world where all you can eat buffets make you skinny, taxes are low but services are plentiful and poor people don’t exist.

So much for “common sense” from the meaner more pathetic versions of GOB or Buster Bluth with a bit of Tobias Funke mixed in.

@redmanlaw: on the way to work today. ufo
http://www.youtube.com/watch?v=2xAn_MZfCTI&feature=related

thanx for the volbeat link the other day. how did they come by that name?

@jwmcsame: UFO takes me back to college when I discovered other metal bands besides Deep Purple and Black Sabbath.

Singer Michael Poulsen first started in death metal band “Dominus”. In 2000, Poulsen became fed up with death metal music and the death metal scene. This resulted in the end of Dominus. In 2001, Poulsen went on to form a new band with some friends and other former Dominus members. This was the beginning of Volbeat.

The band name Volbeat originated from the name of a Dominus album, titled “Vol.Beat”. After selling 1,000 copies of their “Beat the Meat” demo tape, Volbeat was signed to a record deal by Rebel Monster Records, a sub-label of Mascot Records.

@Dodgerblue: Or the wolves with vaginas.

@SanFranLefty: Those wolves need to be shot before they can have abortions.