Mubarak Announces He Will Not Run for Re-Election 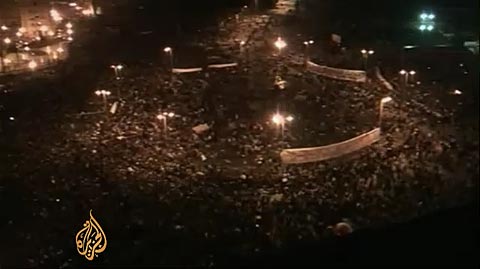 As of the initial post, it’s about 10 p.m. in Cairo. We’re at the Stinque Remote Office, watching Al Jazeera English on the iPhone. Reports are that Mubarak will be addressing the nation soon — or providing a “statement” off-camera — perhaps to announce that he won’t be running for “re-election” again in September.

Crowd counts are notoriously difficult in the best circumstances, but nationwide the estimate seems to be “millions” on the streets.

President Obama has told the embattled president of Egypt, Hosni Mubarak, that he should not run for another term in elections scheduled for the fall, effectively withdrawing American support for its closest Arab ally, according to American diplomats in Cairo and Washington.

3:58pm ET: Mubarak now speaking on state TV… Lots of unsettling talk about hooligans… Reviewing actions of past few days, including forming new government and appointing vice-president… Blaming opponents for “turning a blind eye” to his actions… Mentions “peaceful transition of power” to pave the way for new elections… “Did not intend” to run for election again…

Result: Mubarak will give up power at the end of his current term, but plans to remain in office through the transition.

1930 GMT: But the really important news this evening is that the protesters in Tahrir Square in Cairo have organised a football tournament with the Army.

@mellbell: That says more than a thousand news reports, right there.

@mellbell: And by football, they mean soccer, of course…

@SanFranLefty: In their defense, they are Brits.

As someone faster than me said on Twitter earlier — denial is not just a river in Egypt, Mr. Mubarak.

Is it just me or does Mubarak look like Bela Lugosi?

Wow. Footer. He’s resigning in Sept. Will this fly?

@Benedick: His situation seems a tad more precarious than that, right?

@Benedick: No. He could well change his mind. I don’t think anyone will buy that.

While it’s really not so difficult to wrap one’s mind around the concept of thirty years, this is nevertheless an interesting way of looking at it:

To give American readers an idea of how long Hosni Mubarak has been Egypt’s president, consider that he was elevated to that position in 1981, following the assassination of Anwar el-Sadat, which came just six months after President Ronald Reagan was shot by John Hinckley. If Mr. Reagan had been killed in 1981 and his vice president, George H.W. Bush, had taken over as president and remained in office until today, Americans would be in a similar position to Egyptians.

My AJE feed is cutting in and out as everyone rushes the video server, but clearly the crowd ain’t letting Mubarak off the hook.

@mellbell: And extending the comparison, we weren’t exactly pleased with Bush’s son.

@nojo: He’s got no leverage. When the Chief of Staff of the army tells him to go, he’ll go.

@nojo: No shit. Wonder who will take him and how much $ he’s embezzled.

Via AJE, Something’s going down in Alexandria. “A fairly peaceful gathering is no more,” says correspondent on the ground. Two groups of protesters, pro and anti, “throwing things at each other.” Oh, and there’s a tank moving in.

Back to the bottle! I’m still pissed b/c the library was torched in 40whatever BCE.

Was that an M-60 tank that just rolled by?

@redmanlaw: Buddy of mine was evacuated from Cairo, and has pics of tanks and stuff he took en route to the airport. They flew out on Plugz’ plane!

Obama’s riding just behind the curve again, which is pretty much all he can do.

Wish I was that smooth when I went before a state senate committee today.

Whose finger will be on the trigger when new management gets hold of all that materiel we’ve been giving them for years as a bribe for not attacking Israel?

Anchor babe’s lips look like small bananas that move independently of her face.

@JNOV: didn’t the romans and the arabs both sack the library of alexandria? i’ll bet the tea baggers and the texas board of alleged education would like their turn at what’s left. they way i heard it, any ship from anywhere in the world could dock at alexandria and trade for whatever they wanted to get or give as long as the library scribes were allowed to copy what books, scrolls, papers, and anything else containing knowledge that was on board. carl sagan told me that. we probably still don’t know today much of the knowledge and technology from back in the day that was destroyed. like how the pyramids were built and if humans really are descended from the alien planet the pyramids keep staring at. my parents visited egypt last spring and never felt any danger.

@jwmcsame: Yeah, that’s pretty much what I learned about the sharing of info, esp math, and the sacking. Can’t remember who came up with the concept of zero — I think it was the Indians.

The new Alexandria library is a joke. Censorship galore.