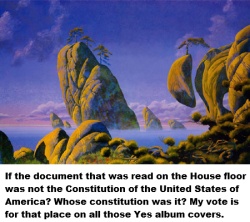 As you’ve probably heard by now, one of the first moves of the new GOP majority in congress was to call for a reading of the U.S. Constitution from the House Floor. And if you weren’t paying attention, that’s probably what you though happened today. The Las Vegas Sun, for instance, reported on the incident thusly:

Despite it being the government’s founding document, it’s the first time it’s been read out, every article, signature, and amendment, on the floor of the House of Representatives. But the event wasn’t just in homage to the founding fathers. It was also a sign of the new influence of the Tea Party, for whom adherence to the Constitution was — as Nevadans will remember from Sharron Angle’s senatorial campaign — a major rhetorical campaigning point during the 2010 midterms.

A Goodlatte aide explained that the Constitution will be read in its most modern, amended form. This will prevent lawmakers from having to recite politically uncomfortable portions, notably the provisions on the “three-fifths compromise” under which slaves were counted as three-fifths of a person for the purposes of taxation and representation.

So wait… what we’re getting is not the Constitution of the United States of America, but rather, a document that whitewashes this nation’s history of institutinalized racial oppression?

Why doesn’t that suprise me?

And to think how close I came to making an “Asia” reference this morning.

Considering the issues of a number of GOPers, I’m pretty sure that those folks from the deep south would have loved to take a crack that particular passage.

On the other hand, no mention will be made of that shameful, terrible period in our history when it was illegal to produce, sell, or consume alcohol.

Given that this is the first time most of the Teabag peeps have actually *heard* most of the Constitution, I’m assuming Boner and co. decided to clean up since there might be heads asploding if they realize that the nigh-deified Founders might have been *wrong* in a few bits that got fixed later.

First they bowdelrized Twain, now the Constitution. How many amendments in the Bill of Rights did they skip over.

@Mistress Cynica: Wait, I saw the list somewhere. 1st, 14th, 17th, 19th… Oh, no, that was just the amendments they want repealed. Since they’re “amendments” and not “the Constitution,” I’m sure they didn’t read any of them.

@IanJ: Especially the 14th. Since it doesn’t apply to wimminz, teh gheyz, or the U.S.-born chillins of furriners….

@SanFranLefty: I never got around to that, because I couldn’t condense it to a manageable size, but wasn’t the argument against the ERA that wimminz were already protected?

@SanFranLefty: Really, if it’s not the 2nd amendment, does it matter at all? I think not.

Cameron on the Del Toro/Lovecraft movie (which he is producing). which happens to be the movie tie in for the Del Toro Game deal with us I was all a twitter about the other day:

Oh we’re very, very actively pre-producing the film right now with Universal. The design work is phenomenal, both the three-dimensional and two-dimensional design work, the physical maquettes, the CG test scenes; the artwork is phenomenal. The fans certainly won’t want for a visual feast with this film. But there’s [still] a bunch of number-crunching and “How you gonna do it?” and “How you gonna make it?”; “Where you gonna do it?” All that stuff.

“As for why Cameron would lend his considerable filmmaking prowess to a movie he won’t be directing, this is what he had to say.”

One word, one man – Guillermo. We’ve been friends for twenty years. We’ve been trying to work together, really, for that entire time. And it has never quite congealed. We’re both Lovecraft fans. Me from my college days, when I discovered Lovecraft. I think I read everything he wrote in about a month. I powered through it. And if anybody can bring Lovecraft to the screen it’s gonna be Del Toro.
He’s got a real vision for the film. It’s very, very well-developed in his mind. You know, I’m just there to facilitate his vision. I don’t have any strong sense of authorship; zero sense of authorship. I’m just there to try to get it made and help him do the movie that’s in his head.

@nojo: Yes, among other arguments against it. But apparently women aren’t human beings in Scalia’s mind, since the 14th says “any person.”

@SanFranLefty: As both a Wop and a Papist, Scalia should know that His Kind weren’t entirely welcome within living memory.

And how I escaped the Wop Papists in my family is beyond me. I think we left them all behind in Chicago.

sure but, well, I suppose there are non papist wops.

@TJ/ Jamie Sommers /TJ:
which reminds me of something funny I saw the other day.

Wishful Drinking
its great. its a sort of one woman show by Carrie Fisher. what an amazing life she has had.
she talks about being the daughter of Debbie and Eddie and Star Wars (which is the funniest part of the show) and drugs and stuff.
very funny lady.
at one point she talks about a blog post with the headline “WTF happened to Carrie Fisher? she used to be hot and now she looks like Elton John”

that reminded me of it because she talks about how her dad Eddie is now obsessed with young asian women so he lives in SF because of the large Chinatown.

SPORT: Andrew Luck staying at Tree is NOT IN THE CONSTITUTION but is happening anyway.

@Capt Howdy: I saw her do this in LA a year or so ago. It was fall-down-laughing funny and very poignant. I think that her Dad just passed away.

@Dodgerblue:
to bad about Eddie. I liked him after seeing that.

@chicago bureau: But I don’t think The Tree will come up with $7.5 million to match the Dolphins’ offer to Harbaugh.