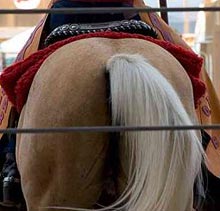 Last we heard from the Asshole from Oklahoma, he was refusing to participate in a Tulsa holiday parade because the town had forsaken Jesus. This morning, he reiterated his opposition to secular Festivus celebrations:

INHOFE: Gretchen, I rode my horse in that parade for 30 years and I never missed one until they changed the name. When he said that was a silly reason, I don’t think that was a silly reason at all… But, you know, this is a bigger picture… You know, I would expect it some other places, but not here in Oklahoma…

INHOFE: They’re the ones to get the hit… I think there are a lot people of other faiths who wonder also, why do they always pick on the Christians?

Out of 228 million American adults in 2008, 173 million are Christian. Only 9 million worship a False God, while 34 million are Heathens. (Another 11 million say Fuck You when asked.)

So, stands to reason: If you’re gonna throw a rock, choose the fattest target possible.

Inhofe: ‘Why Do They Always Pick On The Christians?’ [ThinkProgress]

“Why Do They Always Pick On The Christians?”

Because it’s fun. Especially those of the dumbshit fundie stripe who blow a head valve every time someone mentions another holiday while assuming that the US America is a “Xtian” nation when in fact it was a secular nation built on the premise that religious freedom means freedom from religious assholes who think that shoving their religious beliefs down the throats of people who don’t agree by a % let alone non believers is a “good” idea.

If The Man in Black (a Praying Man) can cover Personal Jesus, then what’s the hub bub? Sheesh.

Obama cut a deal on taxes? Millionaires get to keep their Lambos?

And, you know, Cool Hand Luke.

@Dodgerblue: Dog Bites Man. At some point, Demrat caving ceases to be news.

@JNOV: I was just listening to that tune.

@Dodgerblue: @nojo: He’s not even going to hold out for extending unemployment benefits, is he? Wuss.

Inhofe is among the dumber senators – he’s up there with Kyl, DeMint, and Cornyn. He always brags that there are no homos in his family … someone needs to dig up a few. And put them on the teevee in fucking Oklahoma. Assholes.

@redmanlaw: Not bad, but $250 mill doesn’t buy what it used to in terms of jobs.

@redmanlaw: Sweet. I really like Cash, esp since Nashville turned its back on him and then tried to love him posthumously. Such bullshit.

I’ve been trying to get off the dole for awhile, taking civil service tests and whatnot. Guess who’s hiring – L&I.