There’ll Always Be An Arizona 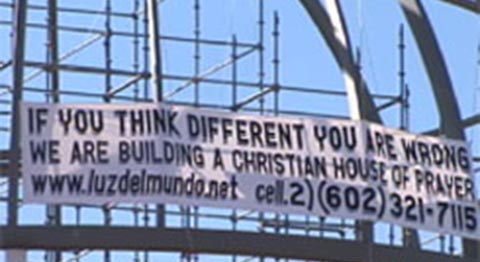 A new dome-like structure near 19th Avenue along Interstate 10 in Phoenix is the Light of the World church, a nondenominational Christian church hoping to modernize traditional worship services, a church spokesman said.

Since the distinctive dome shape went up, church leaders said they have received phone calls from concerned neighbors who’ve mistaken the building for an Islamic mosque.

nojo
5:19 pm • Monday • November 15, 2010
comment »
Choose Your Delusion
And the Nineteenth Amendment Was a Real Bitch The Police Who Investigate Contraband Cupcakes, and the City Councilman Who Narcs the Offenders
11 Comments
ManchuCandidate

We need Phil Ochs now more than ever.

Local news here is shit. It’s not church’s neighbors complaining. They’re in an industrial area next to a couple of rehabs and down the street from a fairly liberal neighborhood. What they meant to say is that suburbanites driving by on I-10 are the ones bitching. The Roosevelt neighborhood people don’t give a rat’s ass.

@TJ/ Jamie Sommers /TJ: But WTF with the dome? Are they hoping for extra revenue by hosting a new bowl game, or they just don’t want to let their non-denominational Jebus see them sweat?

@Nabisco: Dunno. But it certainly wouldn’t be the only church in town with a dome on it. My parish has one

Can we please secede? It’s not funny anymore.

A church or an Iglesia? The Mother church is in Guadalajara. And the dome is Moorish inspired. The congregation gets rave reviews.

Glow in the dark dicks and vajayjays everwhere.

Two men enter, one man leaves. What a great idea for a church! That’s some fundamental Xianity I can support. In no time they’ll kill each other off. Think of the cable ratings when the services are televised.