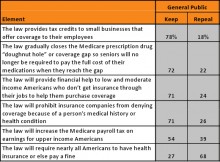 Following Ezra Klein, Sullivan feels that the chart illustrates the difficulty Republicans will have in pursuing a repeal of the new law: almost all elements of the law are very popular (with support in the 70% range).

But something else about the chart stood out for me. Its inherent contradictions, I believe, serve as a clear illustration of the mainstream media’s continuing failure to educate the American people on matters of public interest. Furthermore it is a failure that transcends partisan difference

What caught my eye, primarily, were two items on the list:

A) 71% support for prohibiting insurance companies from denying coverage for people with pre-existing medical conditions.

B) 68% opposition to the public mandate.

The reason these two points are important is because, as any economist can tell you, you can’t have one without the other. Requiring insurance companies to cover people with preexisting conditions while not simultaneously requiring conumsers to purchase insurance when they are well would lead to a wholesale bankruptcy of the insurance industry as consumers held off on buying medical insurance until the very moment they need it –secure in the knowledge that coverage, by law, could not be denied them.

Now, typically, the way that serious, self-important, political commentators treat data like this is to scold the American people for “wanting to have their cake and eat it too.” But isn’t it just as likely that the real problem is that Americans by and large have not been made aware of the essential link that holds between the insurance mandate and the prohibition against denial of coverage for pre-existing conditions? After all, in my personal experience, Americans are fairly reasonable individuals and are possessed of enough innate intelligence to grasp the essential conflict between point A and point B once it is explained to them. And in view of the well documented and widespread public belief in falsehoods as wide ranging as the “death panel” myth and the fantasy that Barack Obama raised taxes, I don’t think it can be denied that the media does an awful job of educating the public (as opposed to merely reprinting disingenuous, dishonest, misleading, partisan talking points).

The reason why I think this particular issue escapes the partisan divide is this: whether you are opposed to the new Health Care Reform law or whether you support it, you need somehow to account for Americans’ incompatible views on point A and B above.

If you’re opposed to the law, then you probably feel that Americans’ desire to see a prohibition on coverage exclusions for pre-existing conditions is predicated on their ignorance of the essential link between this provision and the provision that they be required to purchase coverage. Once Americans realize how closely tied they are, you might surmise, support for the pre-existing condition portion of the law would drop accordingly.

And vice versa: if you support the law then you probably believe that most Americans would have less of a problem with the individual mandate if they realized that it’s essential to ensuring that insurers cannot deny you coverage for a preexisting condition.

Regardless of where you fall on the political spectrum the end result is that what you are objecting to is not the fact that Americans want the impossible. It’s the fact that they don’t realize that they want the impossible. They simply haven’t been educated on the link between provision A and provision B. And that, my friends, is a failure of the mainstream media to do its job.

There was an article in the typically clueless NY Times recently wondering why Americans with pre-existing conditions haven’t flocked to get insurance through the Federal high risk pool. They concluded that perhaps word just wasn’t getting out and that people didn’t know this was an option. They mentioned only in passing the reason I–and I suspect many others–haven’t taken advantage of this opportunity: it’s still bloody expensive and I don’t have an extra $600 per month, especially for crappy coverage with a high deductible.

Is education really going to do the trick if the reason for the discrepancy is simply the idea that people are okay with the government requiring someone else to do (or not to do) something but not requiring themselves to do so?

My suspicion is that you’d still have a discrepancy, but not nearly the 40 point discrepancy that now holds. I think it would be closer to 55/35. Some people will insist on A but not B or B but not A even if they ilnk between the two has been explained to them. But the 70/30 discrepancy is probably largely a result of the news media simply not taking te time to explain what is in the law.

Considering that the MSM (anywhere by the way) is more on ‘tainment than info. Should any of us be surprised?

I will say the poll is rather accurate about the “no denials” and “no public option” because as an outsider/furriner I have had to endure jabs from other US Americans about “socialized” death healthcare especially from people who have no insurance or just regular folk who hate their insurance supplier. Many US Americans are clueless about what it means to actually have it.

1) Bitching about waiting. Yeah, that’s what happens when everyone has HC, you have to wait for some things. The system is based on triage. The more urgent the need, the faster things happen. I’ve learned that it isn’t always good to be pushed to the head of the line. People who constantly bitch here in Canada City are the self important, rich, the sociopathic wannabe rich and extremely self important. They think that their money/ego should allow them to jump ANY line so why should they have to wait with the riff raff like me?

2) Taxes. I’ve been over this before. Only 6% of Canada City’s HC dollar is spent on overhead (aka bureaucracy and “profit”) while 26-28% of every US America HC dollar is. The public option is actually more “efficient.” Yes our taxes are slightly higher, but I or my employer doesn’t pay $2400 a MONTH (usually more) to keep my body in one piece (plus that whole pesky denial of coverage.)

3) When I get unemployed, I get the same basic coverage. The only difference is that I lose out on things that supplemental private insurance (we do have employer “extras” here) covers like a private room or some dental coverage. When I had my operation in late Feb, I would have still had to pay about the same thing… 200 bucks (for drugs) except I wouldn’t have had the semi private room.

I’ll admit it: This health insurance “reform” scheme fills me with an apoplectic, visceral rage. I’ve purchased my own private insurance since 2004, and FSM help me, it sucks. It’s outrageously expensive, the deductibles are huge, the list of services not covered is long, and the premiums go up 20%-30% each year. Basically, it’s the best of the worst, and it’s all that my family can afford. BHO double-dealed his way out of an actual, robust public health plan–not even a Medicare buy-in!–so now we’re effectively permanent indentured servants to the very same evil companies that are causing the health care crisis to begin with, much in the same way that we’re now the piss-on subjects of the financial plutocracy that caused the current Depression and continue to steal everything in the Treasury that hasn’t been nailed down. The Demonrats didn’t even have the decency to require some kind of basic premium controls to prevent their puppet-master insurance companies from gouging the shit out of customers who’re now required by law to buy their shitty products. You know what you end up with when you cut the baby in half? OK, Ima gonna stop ranting now ’cause I’m about to launch into some uncontrollable, Daffy Duck-style backflips.

Totally agree – but what pisses me off MOAR is that the same insurers we’re being fed to have the temerity to WHINE ABOUT IT and spend millions upon millions of dollars worth of premiums funding teabaggers and anti-HCR attack ads. All I can figure is that they want the reverse scenario: everybody’s required to buy their product, but they get to drop anybody that actually costs money.

@al2o3cr: “Sorry, we don’t cover conditions that start with ‘C’ like Cancer and Car Crashes.”

On a much lighter note: Top 10 Country-Western Songs of all time

10. I Hate Every Bone In Her His Body But Mine

9. I Ain’t Never Gone To Bed With an Ugly Woman But I Woke Up With A Few

6. Wouldn’t Take Her To A Dogfight ‘Cause I’m Scared She’d Win

5. I’m So Miserable Without You It’s Like You’re Still Here

4. My Wife Ran Off With My Best Friend And I Miss Him

3. She Took My Ring and Gave Me the Finger

2. She’s Lookin’ Better with Every Beer

1. It’s Hard To Kiss The Lips At Night That Chewed My Ass All Day

@al2o3cr: All I can figure is that they want the reverse scenario

That is literally the case. There’s an industry term for it, but I’m still on my first coffee.

@ManchuCandidate: “Whatever’s Wrong With You, We Don’t Cover It”

“No, there’s nothing we can do. Please position your body near the door so that the coroner can easily remove your corpse.”
—The Onion

Sounds like a wonderful medical procedure, come to think of it.

@nojo: Ha ha, they said it’s looking likely we’ll get a public option! Oh wait, it hurts when I do that.

Those hearings would have been a hoot if they didn’t involve sick people getting boned by insurers – the CEOs simultaneously whined about how terribly expensive and “job-killing” (to steal a teabagger word) any limits on recission would be, then (without a shred of irony) asserted that recission only affected a tiny fraction of consumers and wasn’t a problem.

And the Parade of Bummers keeps on rollin’…

The Democratic Health Care Plan: Don’t Get Sick Until 2014.

@nojo: The correct spelling is “rescission.” It’s misspelled at its first occurrence in the Drum article, then spelled correctly later on.