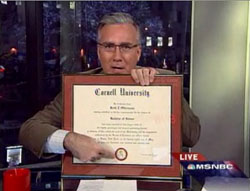 ATTENTION: This is a LATE BREAKING STORY.  Late yesterday, MSNBC President Phil Griffin formally announced that he was permanently, officially and irrevocably canceling Keith Olbermann, a decision that has been proclaimed infallible by Papal bull and thus will stand forver until Olbermann is allowed to come back on Tuesday (as in: tomorrow). If you haven’t heard yet, Olbermann is the MSNBC host who jeopardized his network’s well deserved reputation for objectivity and fairness by singlehandedly orchestrating Harry Reid’s improbable re-election giving some money to a few guys running for something. This is like Pete Rose betting on Baseball, the Chicago White Sox throwing the 1919 World Series, or Ben Collins writing a book in which he reveals himself to be The Stig.

In a similar incident some years ago, MSNBC fired Imus in the Morning show host Don Imus for making racially charged remarks about a female college basketball team. At the time, Imus was about the only thing MSNBC had going for it. Not long after, the nascent Fox Business Channel (which, like MSNBC also had nothing going for it, except perhaps in an unintentional comedic sense) hired Imus to do his old show and so that Fox Business would at least have a couple of viewers for a few hours each day.

In announcing the permanent cancellation of Countdown with Keith Olbermann until this Tuesday, it is likely that MSNBC was hoping to prevent Fox News from hiring away Mr. Olbermann, and in an obvious and crass attempt to make liberals and liberal issues look bad, put him back on the air with no editorial oversight whatsoever.

That’s it for now.

Could you post directions to the planet you live on, because where I live MSNBC is regularly castigated for being a “lefty cable network.”

@karen marie wants to know — Fucking integrity, how does it work?: