Stinque
Home Latest Comments Log in
If it smells, we’re on it.
Stinque
Mastodon: @stinque@mas.to
2010 Elections 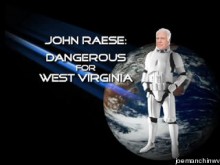 Joe Manchin (D) has a new ad out for the West Virginia Senate race, and it trumps Carly’s demon sheep.

“We need 1,000 laser systems put in the sky, and we need it right now,” Raese is shown saying in the video clip.

Then in comes that John Williams Darth Vader theme music, images of people in storm trooper costumes on parade, and laser beams from the sky wiping out a public school, clean drinking water and a Social Security card. The final image: John Raese’s head on a storm trooper body, with laser beams raining down upon Earth in the background.

Somewhere George Lucas is revving up his army of Ewok Lawyers to send them to WV.

The funniest thing about Raese’s “lay-zers” is the complete idiocy of his cost estimate – $20 billion for the whole deal. At $15000/kg launch cost, he couldn’t put 1000 boxes of rocks into orbit, much less missile-defeating satellites…

@al2o3cr: Don’t you be disrespecting my box of kinetic energy weapons.