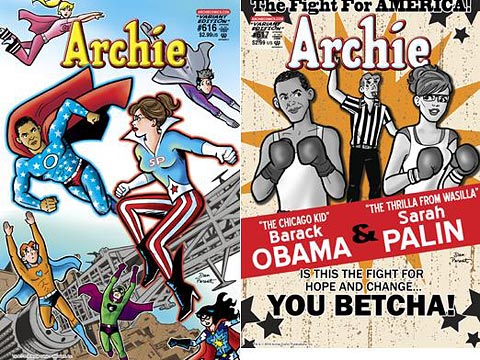 Adrian Morgan, editor of Family Security Matters — a name that spikes the landing on a difficult Triple Axel of clichés — would like you to know that Muslim comic-book superheroes are terrorizing America’s Youth:

Are we going to see ass-kicking Christian superhero nuns, called Faith, Hope and Charity, whooping sinner’s butts and sending Satan into Hell? It is doubtful. This disparity is one of the worst things affecting society at present. Christianity and Judaism do not get featured in mainstream media, but Islam is not only depicted in all strands of the media, it is being promoted by a president who seems to have forgotten what he swore to uphold when he entered office. If Obama can promote Islam, he should also publicly promote Christianity, Judaism, Buddhism and every other faith. The fact that he does not is a very worrying development in politics.

Well, not nearly as worrying as Archie getting into the act.

Is Obama Trying To Indoctrinate Your Children With Muslim Comic Books? [TPM]

In Archie, Obama vs. Palin [Politico]

I WOULD TOTALLY BUY THIS (for no good reason at all)!

Butchery of Sugar Sugar By the Archies

Right? It sounds like a Frank Miller book, totally. I can see the artwork in my head. Just add a suggestion of a wimple and a cross and we are good to go.

Attention Ian J: Sounds like excellent spin-off fodder from your Penguins series…get on it!

@TJ/ Jamie Sommers /TJ: Or they could be Shirley, Goodness, and Mercy.

@TJ/ Jamie Sommers /TJ: Also the names of the daughters of former Navajo tribal chairman Peter MacDonald, who was sent to federal prison in the late 1980s on corruption charges for taking bribes in connection with the purchase of a ranch by the tribe for millions of dollars over its appraised value. His indictment and conviction led to a systemic overhaul of the Navajo Nation government that resulted in a stronger tribal council which has had the result of a consolidation of power in its hands and in the tribal bureaucracy. One of his successors later resigned rather than face trial on similar charges. The current tribal president, in response to his weak position vis a vis the council and popular discontent with the body, pulled an end run around them via the referendum process and reduced the size of the council.

Fun fact: RML covered the Navajo Revolution as a reporter for The Albuquerque Tribune, thereby getting some cred out on the rez that I can still cash in on. People think it’s cool if you were there.

@flippin eck: Check, ass-kicking superhero nuns. Unfortunately, the nuns from Penguins would probably just use their ass-kicking superpowers to start up much larger numbers rackets and finally start up that choirboy prostitution service they’ve had their eyes on.

Mountain range near Eugene is known as the Three Sisters. Commonly called North, Middle and South Sister, but officially Faith, Hope and Charity.

@TJ/ Jamie Sommers /TJ: I would totally buy that too.

Also, it should be Faith, Hope and Charity using their wonder-triplet superpowers to thwart the evil pederasts within the church. With strap-ons and such. Or would that be too manga?

Well, if some Jewish carpenter guy can get resurrected, I wouldn’t count out the Three Sisters. Plus they probably have awesome knitting needles with which to wreak their vengeance upon civilization.