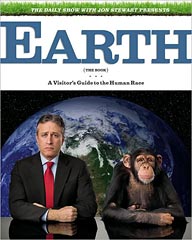 Title: “Earth (The Book): A Visitor’s Guide to the Human Race”

Blurb: “Where do we come from? Who created us? Why are we here? These questions have puzzled us since the dawn of time, but when it became apparent to Jon Stewart and the writers of The Daily Show that the world was about to end, they embarked on a massive mission to write a book that summed up the human race… After two weeks of hard work, they had their book.”

Review: “This guy should stick to comedy. In fact, he should probably get out of the public eye because this book starts out badly and then takes a turn for the worse. Simply awful stuff and totally unbelievable. Trust me. DO NOT BOTHER READING THIS JUNK SCIENCE.” —C. Rutherford “BargainFinder”, Ohio

Footnote: With a discount price of only $15, it’s a shame you don’t get free shipping. Say, why don’t you also buy the new David Sedaris book for only $11 and double our kickback your bargain?

nojo
7:00 am • Sunday • September 26, 2010
comment »
Choose Your Delusion
Stinque Recipe Challenge But What if She’s an A Cup?
9 Comments
ManchuCandidate

Awwww… I guess the 50 cent words and science made C. Rutherford “Bargainfinder” feel dumb and so he/she cried.

A former friend of mine used to send me links to a website about “junk” science. It was really oil and tobacco propaganda masquerading as “news.”

Why do people who have no knowledge about science think they’re qualified to pass judgments on it? (BTW, the exfriend got extremely insulted when I asked him if he thought his political science degree made him a real scientist) I have a reasonably extensive science background, but I don’t go making statements on things I barely know about (unless I’m being a smartass.)

What pisses me off the most are folks who proudly proclaim ignorance on a subject trying to pass judgment on things they’re ignorant about. This is why I generally stay out conversations that involve fashion or most human emotions.

@ManchuCandidate: As a juris doctor, I regularly prescribe hot toddys for a cold.

@ManchuCandidate: As my exasperated grandmother used to say about a son-in-law of hers who felt that his “common sense” was all he needed to navigate in the the ocean of thought: “He talks long and learnedly about subjects of which he knows absolutely nothing.”

Are you kids aware that it’s Banned Books Week?

@karen marie: I am! :) I put together a display for my library and everything. Our collection is pitifully outdated due to being located in Louisiana, but luckily the list of frequently banned and challenged books reads very much like the list of 19th and 20th century classics, most of which we do have. (I did spend my own money to buy us a copy of Fahrenheit 451–no, we didn’t have it at all–and a second copy of To Kill A Mockingbird.)

What other word can you use when she says shit like “Marriage is not a civil right, you’re not black” to a crowd of gheys at the “HomoCon” of GOProud, and engages in an extended riff in front of a predominately white audience on blacks being on welfare and breeding muggers.

@SanFranLefty: Mommy was on fire last night with the twittering.

Honest question — since when did See You Next Tuesday become such a vile word? Over in Merrie Old, the c-word is uttered with only minimal face-slapping.

I’d call dropping the H8 on blacks “connecting with the audience’s shared values”. I mean, they can’t ALL just be in the Log Cabin for lower taxes, and the ghey precludes them from really participating in the rest of what passes for the GOP’s values (biblical literalism, etc) besides racial hatred…

@al2o3cr: GOProud is a flavor of conservamarys that goes beyond the Log Cabiners. The LCRs look like the dying breed of moderate northeastern Republicans by comparison.