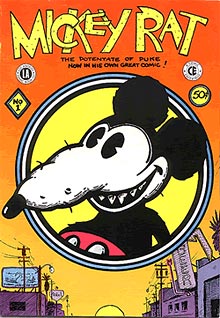 Honestly, we could just blurb the last two lines, but this entire exchange from 2007 fascinates us…

O’DONNELL: Bill, if we — if we approach this complicated bioethic issue with our heads in the sand, the other end is in the air.

O’REILLY: My head isn’t in the sand, Christine. I have the biggest head in the world. There isn’t enough sand on the beach in Hawaii for my head to be in there.

O’DONNELL: My point is, we’re approaching this issue with the other end in the air.

O’DONNELL: By their own admission…

O’DONNELL: …these groups admitted that the report that said, “Hey, yay, we cloned a monkey. Now we’re using this to start cloning humans.” We have to keep…

O’REILLY: Let them admit anything they want. But they won’t do that here in the United States unless all craziness is going on.

O’DONNELL: They are — they are doing that here in the United States. American scientific companies are cross-breeding humans and animals and coming up with mice with fully functioning human brains. So they’re already into this experiment.

Takeaway: In the near dystopian future, sentient mice will be bumfucking our exposed asses on the beach. Except Bill O’Reilly, who gets it in the eye sockets.

nojo
7:08 pm • Thursday • September 16, 2010
comment »
Choose Your Delusion
O’Donnell Could Make a Killing on 1-900-CHRISTINE Women on the Verge of a Nervous Breakdown
23 Comments
FlyingChainSaw

Christine, I think, proved her point since she is obviously some kind of hybrid with the body geometry and dimension of a human and the brain of a mouse.

If I have my GOPer subtext translator working properly then Chrissy’s saying is that she’s “secretly” lusting/waiting for some mad scientist (probably Korean because that’s just the way we go) to make a horse man ape hybrid. Man looking but with the stamina of an ape and the dong of a horsey.

@ManchuCandidate: Somewhere out there she must have commented on the Old Spice ads.

Check this out. Her campaign has $1 million in the bank. L’Onanette is virtually homeless. How long do you think it will take for her to take the advice of some idiot to set up a series of shells controlled at apparent arm’s length and to use them to siphon that million into her purse? Probably already done or will be by tomorrow if they need to incorporate a few companies offshore.

Talibunny, L’Onanette’s hero, laundered PAC money from SarahPAC by having the non-profit take bulk orders of her book. L’Onanette is probably poor enough, reckless enough and stupid enough to do something far more reckless and indictable. Let’s hope for the best.

I have to go sharpen Nigel.

@FlyingChainSaw: She was siphoning earlier funds without the bother of shells, according to her old campaign manager.

Also, apparently she doesn’t (or didn’t) have a proper campaign treasurer, which displeases the FEC.

Plus, if you’re keeping score, I’m skipping her claim that the Clintons killed Vince Foster, as well as her epic discourse on Lord of the Rings. We have standards here.

TPM got here first, but: somebody should make a ton of picket signs with Pinky and the Brain on ’em and hound her from now ’till the election.

@nojo: Ah, yeah, well, minor detail, any corporate structure needs a guy who takes the hit if the books are skunky. I haven’t been paying that much attention. Is she like just having people wire money into her checking account or something?

@chicago bureau: Yeah, TPM grabbed my first choice for illustration, so I had to go hunting for an alternative.

@FlyingChainSaw: I forget the details. She probably just wrote campaign checks to her landlord, nothing fancy.

Or to her bank — there’s a mess surrounding her mortgage, I think, when she sold her house to her chaste BF.

Really: She’s just your bog-standard wingnut talking head. Who’s now the Republican nominee for Senate from the great state of Delaware. Which changes everything.

I need to work less so I can follow this stuff.

@Tommmcatt Cannot Be Arsed To Think About Sharon Angle: Sad to day, I don’t get it. But I’m old. I’m used to that.
The very idea that someone this insane is a Senate candidate–and that she’s not the only certifiable one on the ticket this year–scares me more than I can say. Stupid is taking over.

Yeah, it was ok. Thanks for asking.

I just saw John Hamm on Daily Show. Good Lord. That is a plain boring man.

@Mistress Cynica: It was a Blogenfreude classic.

Also, unrelated, but, Christina Hendricks is married to this guy?

@mellbell: I hate that fucking guy; no way he can appreciate Christina the way I can.

@Tommmcatt Cannot Be Arsed To Think About Sharon Angle: Lizard is right. Someone needs to back over that shitheal in ’72 Buick Electra a few dozen times.

@mellbell: Talk about every nerd’s fantasy–one day the jocks who used to beat you up in high school will weep with envy when they see you with your wife, the hottest woman in America.

@FlyingChainSaw: @mellbell: @Mistress Cynica: As Ava Gardner said to the British consul in Africa when he asked her why she should be wasting her time on that scrawny Sinatra fellow “He may only weigh 120 pounds but 110 is cock.”