The Future of Humor 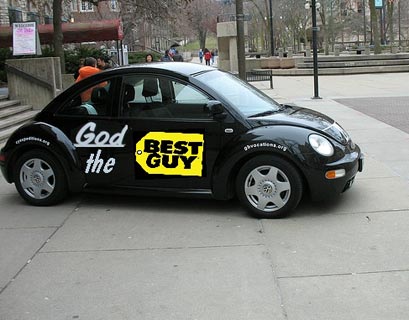 Forget The Onion. Do you want to know what humor will look like 15 years from now, in the 13th year of the Palin presidency? Then you’ll want to check out a funny Fox News photo feature titled “A New Look for the ‘God Squad.'” Just bear in mind that when I say “funny” I don’t mean “ha, ha, funny.” Rather, I mean depressing, humorless, joy-killing, religious themed “Photoshops” that appear to have been produced by a blind octagenarian nun using MS Paint and a gummed-up ball-mouse. My only question at this point: given that Fox appears to have made the tranformation to overtly evangelical prosletyzing right-wing proaganda newtork, when will the merger talks with the 700 Club actually take place?

that one has actually occurred to me.

She will not be pleased: Best Guy indeed.

Well that harshed my vibe.

TJ: I’m wearing the camo tie-die shirt that Son of RML made me to work today to celebrate a huge litigation victory over the zombies trucking industry.

TJ/ I – along with MellBell – am on the frintlines of the Beck/Tea Party Express. First run in with the Zombie Hordes last night at the CVS. Hope to escape the 202 before the VW buses monster trucks begin to roll in.

@Dodgerblue: My last effort to post this vanished into the ether.

I’m guessing this is the Port of Los Angeles air pollution case. This is great news. Congrats to all who helped make it happen.

Wouldn’t Fox have to get permission from their Muslim overlord first?

@Walking Still: It is. The zombies crept back into their underground bunkers in Virginia. Get me in the sandbox if you’d like a copy of the slip opinion.

@Dodgerblue: I’ve already found it. It’s extremely thorough and well reasoned. It’s hard to see the trucker zombies getting much traction on appeal.

Oh wait until Best Buy’s attorneys go after them for copyright infringement.

@Dodgerblue: WS is not on the Book of Faces, would you like me to pass the decision on to him in the back of class?

@Nabisco: How long you here for, man?

Humor in Uniform is funnier.

@SanFranLefty: Best Buy and Target have been funding people of their ilk, but they probably could use the money right about now.

The World’s Largest Truck Stop off I-80 in Iowa (yes, it exists) has many, many things to induce wonder and horror in the heart of the typical urban liberal. One such example is a whole rack of shirts with corporate logos and taglines that have been manipulated into painfully unfunny Jeebus puns. When I saw them, I came this close to becoming Wiccan on the spot…until I remembered all the equally tacky crap in New Age shops.

there is no such thing as conservative humor or clean coal

@jwmcsame: You start with conservative humor and end up with Danny Kaye.

@jwmcsame: i fucked up. that was supposed to be MLK jr. sorry. hope that didn’t kill anybodys buzz

@mellbell: i gotta quit doing this shit at work. all this work is fucking with my blogging and i’m not paying enough attention. thanx

@mellbell: All of next week, most of the one following, and a day or so before travel on the 15th. I think I escaped just in time to avoid the trucker hat wearing mobs who don’t even fucking know that (a) you don’t block the left side of the Metro escalator, and (b) if there’s no traffic coming CROSS THE DAMN STREET ALREADY.

@Nabisco: But how fucking awesome would it be to see some black DC cops handing out citations to teabaggers for jaywalking?

Speaking of jaywalking, on my way into my office I saw a SFPD officer writing a ticket to a middle-aged Asian woman who jaywalked in front of him (and me), nearly got hit and caused several cars to slam on their brakes, and when he was writing the ticket she acted as if she only spoke Chinese. She was screaming at him and was about to hit him.

ADD: If he had cuffed her, that would have been the best part of the jaywalking ticket. If I didn’t have a dumb conference call to go to, I would have stood on the sidewalk next to the smokers to see how it went down.

@flippin eck: Why can’t we just have Dekotora instead? We really have this bizarre way of making Japan look sane by comparison.

@SanFranLefty: Haha! They will hand out jaywalking citations with the quickness in Santa Monica! Even in a pedestrian mall. That reminds me: In the summer or ’00 or ’01, something like 19 pedestrians were killed in SF by buses jumping curbs and by cars in general. Here, we kick and spit on cars that don’t give us the right of way. In SF, I was like, “Okay, two tons of metal. You mos def have the right of way due to mass and momentum. Go on with your bad self.” I was a law-abiding pedestrian for sure.