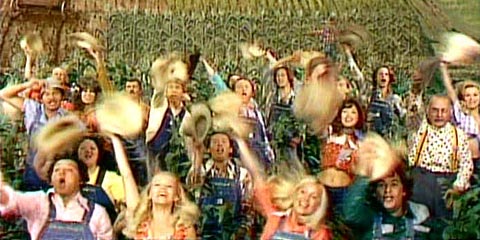 You, over there. You say you’re the lieutenant governor? Come on down!

At a recent event in Hamilton County, [Ron] Ramsey was asked by a man in the audience about the “threat that’s invading our country from the Muslims.” Ramsey proclaimed his support for the Constitution and the whole “Congress shall make no law” thing when it comes to religion. But he also said that Islam, arguably, is less a faith than it is a “cult.”

“Now, you could even argue whether being a Muslim is actually a religion, or is it a nationality, way of life, cult whatever you want to call it,” Ramsey said. “Now certainly we do protect our religions, but at the same time this is something we are going to have to face.”…

Thank you so much, Mr. Ramsey. If anyone else from your fair state would like to play, there are plenty more Hee Haw stills where this came from.

nojo
4:42 pm • Monday • July 26, 2010
comment »
Choose Your Delusion
Things Not to Say to a Democratic Operative Recording Your Comments Without Permission Literary References We Strongly Doubt Sarah Palin Knows Anything About
10 Comments
ManchuCandidate

Can you kick states out because they’re stupid?

I’ve just been, uh, refudiating my cousin’s husband on Facebook. He’s a really sweet guy whose dad is an Iranian refugee. He has enthusiastically supported intellectual freedom stories and such that I’ve posted before, but it turns out he’s A-OK with the French burqa ban.

Dude, I get that you’re pretty damn happy you didn’t have to grow up under an oppressive regime, and that your hypothetical sister could choose whether or not she wanted to wear any sort of veil. So am I! Doesn’t mean that democratic governments can issue blanket bans on articles of clothing.

Have you seen the polls showing UK support for a burqa ban between 60-70 percent? I was thinking “Thank puppies for the First Amendment, because even if a majority of misinformed Americans also support it, it could never happen here.” Now I’m not so sure. Some establishments of religion are more equal than others, perhaps.

Indeed. I *still* don’t understand why the French are stressing about it. It seems like an empty gesture that’s only really going to serve to piss people off. Then again, they *are* the French; sometimes, that’s just how they roll. :)

Personally, I’ve never understood what the big deal is about. You can walk around with a duck on your head for all I care, as long as it’s cool with the duck. Now, if you start threatening other members of the community because *they* aren’t wearing ducks, well – you’re done.

@al2o3cr: That’s exactly what it is, dog-whistle politics disguised as “feminism” where no one ever asks for input from the women affected. Remember that the far-right anti-immigrant Front National has climbed above 20% in national elections.

@finette: I’ve read that the French ban on religious symbols in school extends to the wearing of a Jewish star on a necklace. I’d like to see some Frog try to take my daughter’s away. She would stuff him into la toilette.

Tennessee is also the birthplace of the toothbrush. Had it been
invented anywhere else, they’d have called it a teethbrush.

@finette: @finette: @Dodgerblue: Sorry, the first part of this comment is going to sound pretentious, so bear with me. But:

When I was in Montreal and hanging out with BeRightBack (that was the pretentious part), he was also explaining that they have those same issues in Quebec. It wasn’t so much (on the surface) discrimination against Muslims, but more about the French/Quebecois viewing themselves very much as a secular society, so any expression of religion is something that they want to ban. Although obviously a lot of them trying to enforce that feels a little like racism/discrimination. Very interesting, and I probably didn’t explain it well, but he is a smart, smart guy and it was a fascinating conversation. And by conversation I mean I just listened.

@Dodgerblue: Supposedly, “small” crosses, stars, etc. on necklaces are allowed in schools, but I’ve never seen them define small. Jewish boys used to be allowed to wear other hats over their yarmulkes too, but I don’t know if that still applies. Sikh boys and Muslim girls are just unlucky enough to wear religious garb that isn’t easily concealed.

I am not terribly incensed by the veil ban. Im sure this will probably lead to flaming derision but the truth is I think veiling is a stupid barbaric custom I can totally understand why they would want to ban them from public schools. stars and crosses, assuming they are not 5 pounds are another matter. but veils are in a class by themselves. and France is not alone. this is being considered several places where muslim populations are growing.
I think you will see it elsewhere.
and it does not upset me.

@homofascist: They are indeed very committed to the concept of laïcité in schools, which has been enshrined in the law since 1905. I was a grad student there when they debated and passed the school hijab ban, and one of my professors told a story about how his parents made him wear a St. Christopher’s medal, but the school principal would grab him every day saying “No God in school” and make him tuck it inside his shirt. That was probably in the ’50s or ’60s. But as I was telling Dodger, more recent immigration has brought students who wear religious garb that can’t really be concealed–it’s all or nothing for them. That double standard is my major problem with the hijab ban.

The total burqa ban is a whole other boules game, though–it would apply not just in government buildings, but everywhere in public. No one else’s religious expression is suppressed to that extent. In fact, there’s an exception in the proposed law for “cultural manifestations” like these guys. (They’re Penitents, not bizarro KKK.)