The Atomic Number for Arse is 27 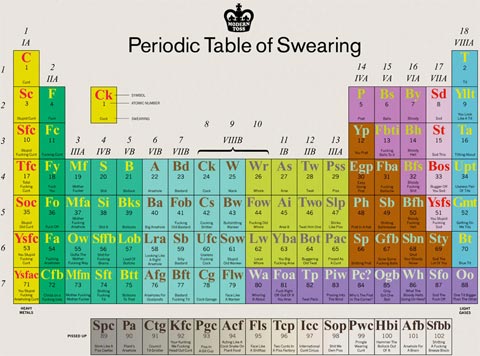 We would love to recommend this handsome Periodic Table of Swearing, available in a “signed Giclee print in limited edition of 300” that would look great on any bathroom wall, but at £90 it costs too fucking much.

Fuckin’ A. Whatever that means.

I’m back from a couple of days in New Orleans. Went for a boat ride out of Happy Jack’s fish camp in Plaquemines Parish. The smell of crude oil was overwhelming. Miles of booms in front of stands of marsh grass were ridiculously ineffective. Saw some oiled brown pelicans — this really gets to me because I’m a big fan of those prehistoric-looking birds.

@Dodgerblue: Glad you’re back. I love those birds. They made the gulf coast of Florida tolerable. Can it ever be fixed?

@Benedick: An excellent question. We are engaged in one of the scariest science experiments ever. Ocean environments are pretty resilient, assuming you don’t keep repeating the environmental insult. However, the oil is the cherry on top of the hot fudge sundae of human fuck ups down there – the channelizing of the Mississippi being one and the dead zone created by (mostly) the agbiz oligopoly of the midwest being another – and possibly the worst.

The best case scenario I can foresee is a gradually restored foodweb in open water over the next decade (outside of the dead zone – which hopefully won’t expand too much. The wetlands that don’t simply disappear – which has been happening fast enough before this – will regrow, but will have a toxic load that they’ll pass up the food web for multiple decades.

BP (and its buddies at Halliburton) will be on the hook for paying for the damage they cause, but proving what degradation they are on the hook for is one hell of a challenge. There may be an equally daunting challenge in finding areas large enough that people are willing to leave the fuck alone to allow for meaningful compensatory restoration.

Dodger – I’d love to hear you thoughts on this. I too mourn the pelicans and, in particular, the turtles – Yertel was an important part of my childhood.

@Benedick: @Walking Still: I think Walking is in the ballpark in terms of the time it may take to return the marsh/wetland environment to what passes for normal these days in Louisiana. As to the deep ocean environment, given the (literally) unprecedented use of toxic dispersants 5,000 feet below the surface, nobody knows what the effects will be.

Part of my day job will be trying to make sure that the feds’ and states’ assessments of the enviro damage, and remediation plans, are legit and that the public and independent experts don’t get shut out of the process. BP has already taken a page out of Exxon’s playbook and is buying up marine scientists to take them off the table and lock up their data. Apparently, $250/hour with a guaranteed 8 hours a week is what scientific integrity is going for at some institutions in the Gulf.

Part of the reason that BP is buying souls is that they know that there will be a huge fight over what the remediation plan will be like, and how long BP will be required to fund projects. Exxon negotiated itself a sweetheart deal in Alaska and walked away after 2 or 3 years; there is still oil on the beaches in Prince William Sound, 21 years later. One hopes that Obama has the toughness not to let that happen again — although if litigation over the remediation plan winds up before some oil industry hookers on the Fifth Circuit, who knows.

Benedick, re pelicans, the brown pelicans in the Gulf just got off the endangered species list. Their nesting grounds are taking a huge hit from the spill. I went out to some rookery islands on my trip and saw oiled birds inside the boomed-off areas. I’ll post some pics on the Book o’Faces when I have a chance. I’m not sure what the scientific consensus is, among those who are not whoring for BP, about whether the spill will drive these huge, graceful fliers and divers back onto the list. We had a similar problem here in So. Cal. thanks to DDT, but I’m happy to say that they have recovered and are back in big numbers.

@Dodgerblue: Heartbreaking. You really think the Obama Administration is going to grow a set and fight over the remediation plan? It’s up to you and all the other tree-huggers to stick the proverbial feet in the fireplace. Maybe I should start looking for jobs with the enviro groups – sadly enough it appears to be the spot of great growth industry in public interest law. (Poverty law of course is a hot growth industry in terms of demand and need but not in terms of funding or supply).

On a happier note, did you at least follow my suggestion go to Frenchman’s Street in NOLA for jazz and food?

@Dodgerblue: As to buying marine scientists, ever hear the term “biostitute”?

@SanFranLefty: What I did on my one free night in the Big Easy: I edited discovery motions past midnight. I have one other lawyer on my team with your level of experience, Lefty, and she’s home on bed rest due to some issues with her pregnancy. I could whine some more, but nobody wants to hear it.

But — I’ll be back there, maybe in a couple of weeks, and I’ve kept everybody’s recommendations about where to go/drink/eat/listen to music.

@Walking Still: Oh yeah. I was interviewed on BBC last night (my price: I want to meet the Queen. Or maybe, a queen) and the “presenters” as they are so charmingly called were very interested in this issue. It was late night, my time, and I had to struggle not to call these people vendidos, whores, lying sacks of shit — the language I use around the office.

@Dodgerblue: I do legal transcriptions for a living. Give me a shout if I may be of assistance in the effort.

@Dodgerblue: You know I’d be more than happy to do some contract work for you a few to ten hours a week…I’m not free, though.
W/r/t the Beeb interview – you should have called them “wankers” – I love that word. Speaking of the media, check your local fish wrap in the next few days – I gave a lot of background info to a writer for a big article she’s doing and FSM only knows if I end up with attribution…hopefully I won’t sound like a complete dingaling.

@SanFranLefty: I will. We still subscribe to what’s left of the LA Times.

@Dodgerblue: I want to meet the Queen. Or maybe, a queen

@nojo: It’ll have to be the real one because we don’t have queens any more. Not since Stonewall. A vanished subset of the subculture. So I’m told.