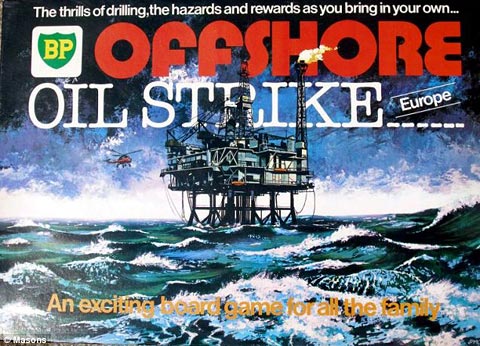 A BP board game from the 1970s challenged players to hoard $120 million to win:

Up to four would-be tycoons can compete at exploring for oil, building platforms and laying pipelines to their home countries.

Strangely enough, cleanup technology hasn’t changed since the 1970s, either.

@Benedick: And he was arrested for larceny? What, did he steal some boy’s virginity?

$20K for getting 2nd place in a beauty contest?

@Dodgerblue: @Benedick: It’s times like this that I hope Germany loses just so God’s Rotweiler can feel a little pain somewhere.

It’s so damn hot my cimicifuga keeps going limp. I hate that.

@Benedick:
Is that your pet name for it?

Gray was placed on medical leave by Hartford Archbishop Henry J. Mansell on April 15. The priest had told people in the community he was gravely ill.

inothernews:
quote of the day – Dolly Parton on Miley Cyrus:

@Capt Howdy: As if one needed another reason to adore that woman.

@Benedick: They were Latin boys, so it makes some kind of sense, I guess.

@Benedick:
they have pills for that

I watched The Best Little Whorehouse in Texas dubbed in espanol over the weekend. Viva el Rancho de Gallinas!

Lo siento, in reference to Dolly Parton and serious cases of the horniness.

@Original Andrew: Burt Reynolds, Dom DeLouise, and Jim Nabors, as well as Dolly and her sweater puppies, Righty, and Lefty? Wow, thats something, that movie right there.

Dolly and her sweater-great danes, holy OMFG! I hadn’t seen that flick in decades, and I still can’t get over how risqué it was, while still becoming a huuuuge hit in the 80s.

I saw Dolly Parton singing in Nashville with the Porter Waggoner band, dressed in gingham with fake plaits but no fake gazokas. She sang the single scariest song I have ever heard: Jeannie’s Afraid of the Dark. I was afraid of her. Oh, and you Stinquers of a certain age? Catt, listen up – why was Porter Waggoner’s face covered in deep scars? No it wasn’t smallpox, though it looked that way? The answer? ::underscoring:: ting tong ting tong….

Now I really must attend to my cimicifuga. Where it should be firm and thrusting it’s gone all limp and soft.

You’ll get an X-rating from the MPAA for one-too many thrusts, donchaknow.

@Benedick: Just be glad you have cimicifuga!

I know. I love my cimicifuga. I have it planted so the spires fill a window. My sister-in-law gave me a whole bunch of baby plants which are coming along. But it does like a damp shady place and we are having bizarre weather. I’ll water it now like the tomatoes: twice a day, for the time being. Once it gets stressed, the florets die back. But I think I saved it in time.

@lynnlightfoot: See, I tried to install an HTML5 iPad-compatible version of the Rimshot Button over the weekend, but after it proved to be more than a moment’s chore, I moved on to something else, figuring it wasn’t that big a deal, and now I hate myself.