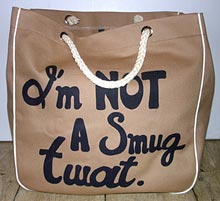 Our guest columnist this morning is The Onion, for reminding us why we haven’t been able to listen to NPR for twenty years, even if we did slip in a Duck’s Breath gag Monday.

And no, we don’t know what makes a three-year-old piece suddenly relevant, but Kottke linked to it, and Kottke’s on the Time 100 list of Blogs That Aren’t Stinque, so he must be doing something right.

CHICAGO—Producers of the long-running Chicago Public Radio program This American Life announced Monday that they have completed their comprehensive 12-year survey of life as a modern upper-middle-class American.

In what cultural anthropologists are calling a “colossal achievement” in the study of white-collar professionals, the popular radio show has successfully isolated all 7,442 known characteristics of college graduates who earn between $62,500 and $125,000 per year and feel strongly that something should be done about global warming.

“We’ve done it,” said senior producer Julie Snyder, who was personally interviewed for a 2003 This American Life episode, “Going Eclectic,” in which she described what it’s like to be a bilingual member of the ACLU trained in kite-making by a Japanese stepfather. “There is not a single existential crisis or self-congratulatory epiphany that has been or could be experienced by a left-leaning agnostic that we have not exhaustively documented and grouped by theme.”

Added Snyder, “We here at public radio couldn’t be more pleased with ourselves.”

‘This American Life’ Completes Documentation Of Liberal, Upper-Middle-Class Existence [The Onion, via Kottke]

Speaking of douchebaggery, self-proclaimed eco-groovy/hypocrite San Francisco Mayor McDreamy and trustafarian wife invested in TransOcean and a half dozen other oil/gas exploration companies.

Where the hell is that daughter of mine? If she’s not raiding my meds drawer and/or liquor cabinet she’s chasing after unsuitable men or hanging out with the gays.

Wait now, the Onion posted this? The Onion? Besides, doesn’t NPR also bring us Car Talk and Le Show, with that man who thinks he’s hilarious but isn’t?

@Benedick: Haha! Harry Shearer. He needs to stick with the Simpsons. I have a weakness for Ira Flatow and Terri Gross.

Flying car set to take off

A flying car is to go into commercial production after manufacturers were given a special exemption by US aviation officials.

The Terrafugia Transition is designed as a ‘light sport’ aircraft, the smallest kind of private aeroplane under FAA classification.

But manufacturers found it impossible to keep under the 1,320lb weight limit, once they had added safety features – such as airbags, crumple zones and roll cage – required for road vehicles.

Uniquely, however, the FAA has granted the Transition an exemption – allowing it to be classified as a light sport aircraft despite being 120lb over limit, reports the Daily Telegraph.

The two-seater Transition can use its front-wheel drive on roads at ordinary highway speeds, with wings folded, at a respectable 30mpg.

Once it has arrived at a suitable take-off spot – an airport, or adequately sized piece of flat private land – it can fold down the wings, engage its rear-facing propellor, and take off.

Terrafugia says that one of the major advantages of the Transition over ordinary light aircraft is safety – in the event of bad weather, it can simply drive home instead of being grounded or flying in unsafe conditions.

it seems like a really bad idea to me but having said that, I totally want one.

NPR has sucked shit for as long as I can remember. All Things Lesbian and Feminist, and the ever-present Cambridge stutter, and Lake Motherfucking Bore Me to Fucking Death Smarmy Folksy Douchebag, they can all go shit up a rope. Except Car Talk, and that only for the credits at the end.

@Promnight: Uh. Okay. I’m kinda on the NPR haterade bandwagon with you, but “All Things Lesbian and Feminist”? What do you mean?

All Things Considered. Its not that there’s anything wrong with that, just that the show sucks shit. Its not fun. Its not good times.

@JNOV: @Promnight: I don’t get a lesbian groove from ATC, but I refer to it as “Small Things Belabored” ever since they had a 12 part series on Yiddish humor of the ’50s. Every liberal arts PhD’s wet dream is to have their obscure thesis topic as a 5 minute segment on the show.

I like Car Talk, though their hyena laughing was mocked to great effect on an episode of South Park (or was it The Simpsons?).

@SanFranLefty: Thats priceless, “small things belabored,” I am hereby changing my pet name for it, as you note, its not particularly lesbian.

What was the SNL skit, the two women, the nervous stutters, the “its fun, its good times” line, and Schweaty Balls, once was the guest? That one nailed the NPR precious smarmy smugly unpretentious pretentiousness groove thing.

@SanFranLefty: @Promnight: I don’t get the lesbian/feminist thing either, and even if it were there. Meh. Who cares? 99.9% of the rest of radio is straight dude stuff. That afternoon drive home show should be called All Things Reconsidered.

4. Man in the Boat button

I could go on…

Have not listened to NPR since they, too, rolled over for the Iraq War under W. Fuck ’em. My local college station used to carry BBC, but they also became an NPR affiliate. I’m a Stephanie Miller, Jim Rome and ESPN radio guy now as far as daytime listening goes.

@Promnight: Don’t forget Wait Wait, Don’t Tell Me – also worthwhile. And the credits at the end of Car Talk? I’ve helped Louie Cronin w/ a few – “Tenafly, matzoh bri …” and “New York, pulled pork …” among others, were mine, though she edited them a bit. Sadly, Louie left the show a few weeks ago.

@redmanlaw: I dumped NPR (except for the above-mentioned shows) when Brian Lehrer interviewed serial liar Betsy McCaughey and didn’t challenge her.

@blogenfreude: I cannot STAND Wait Wait, Don’t Tell Me – I abhor it almost as much as Prairie Home Companion.

I do like Will Shortz’s puzzle segment on Weekend Edition, but I haven’t listened to NPR with any regularity in about 10 years (when they rolled over on the stealing of the 2000 election). The only time I ever listen to NPR these days is when I’m out of town somewhere stuck on a highway and the rental car doesn’t have an iPod plug-in and the other radio stations suck ass.

@SanFranLefty: Totally awesome. Thanks for the linque.

@SanFranLefty: Getting the CBC on the car radio was the best part about going to Montana on a case over the past couple of years. Also, the local Ed Schultz show coming in from North Dakota was really down home.

BTW, I totally want a couple of those bags to give away.

For as much as South Carolina is weird and sucks ass, their public radio system has a bright spot: On the “NPR News” stations (there are “NPR Classical” and “NPR Jazz” stations in the system) at night, they switch to a BBC World News feed.

@Dodgerblue: Sold out of its limited 700-bag run, but the site suggests she might make more.

Took me a few hops to find (and credit) the source. The image itself is all over the place.

@nojo: A collaboration with the Stinqueria?

Chinese media reports that beginning today the People’ Liberation Army (PLA) will hold six days of military exercises in the East China Sea, a message, analysts say, to the U.S. Navy not to steam its carrier battle groups too close to Chinese shores.

While a Chinese military official said the drills are routine, observers say the anti-carrier exercise is intended to pressure the U.S. Navy not to hold joint exercises with the carrier USS George Washington and South Korean ships in the Yellow Sea.

Respected China analyst Andrew Erickson says the live fire training aims to demonstrate China’s ability to attack a U.S. carrier strike group and may include the first test of China’s long talked about anti-ship ballistic missile (ASBM). He sees hints that China’s Second Artillery, a powerful organization within the Chinese military which operates the country’s missile force, may be at a point where it’s ready to test an ASBM.

Lot of writing these days saying that traditional projection of power is rapidly becoming a thing of the past.

Aircraft carriers are the most worthless boondoggle ever in the history of humanity. Each and every one would be destroyed in an instant in a real war, and oops, sorry about the port it happened to be in.

@SanFranLefty: Nice thought, but the designer has her own boutique online. Licensed knockoffs would probably dilute the brand.

@Promnight: Now, but they did OK in the pre-digital age.

@Promnight: Were there any carriers involved when Churchill bombed the French fleet in Algeria?

@JNOV: How do you think the Germans bombed Pearl Harbor?

@redmanlaw: I was asking if the French had carriers. I must really be coming down with something — the Germans bombed Pearl Harbor? Pfft. The Japanese aircraft carrier subs (never used) were interesting.

@JNOV:
They had one, but it was interned in Martinique (wiki.)

@ManchuCandidate: Thanks for doing the leg work for me. I’m really not feeling well.