Stinque
Home Latest Comments Log in
If it smells, we’re on it.
Stinque
Mastodon: @stinque@mas.to
Dispatches From Hell 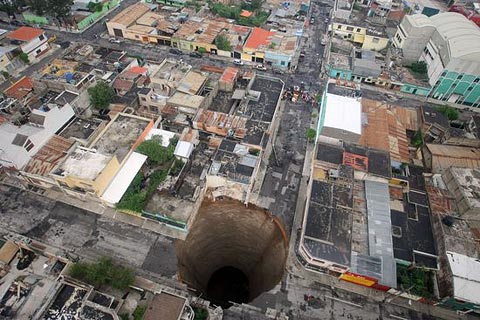 No, this is not a concept sketch for Roland Emmerich’s next disaster-porn spectacular:

This photo just posted to the Guatemalan Government’s Flickr feed shows a spontaneous sinkhole (“hundimiento”) 20 meters deep and 15 wide that appeared today in Zone 2 of Guatemala City, after overwhelming saturation of rains from tropical storm Agatha. Local press reports that it swallowed an entire 3-story building.

Guatemala also endured a volcano eruption last Thursday, which killed a reporter on the scene.

Good lord. I would make an “I haven’t seen a hole that big since…” joke, but it was just IML weekend so I can’t.

This is one of my favorite episodes of The Outer Limits when the freaks from outer space teleport an entire neighborhood to their planet to see if they would make useful slaves.

I blame the mole people for this.

Fun Fact: any story that references the above photo must end with the phrase “… opening a gateway to Hell and thus unleashing 10,000 unspeakable horrors upon an unsuspecting humanity: demon beasts, Hell Hounds, tormented souls of the damned, horrific creatures bent on inflicting terror, anguish and pain upon our defenseless world.”

Well, that explains where Liz Cheney’s been lately – she and dad had to go visit the family. The hole above is from the return trip. :)

@al2o3cr: Well you beat me to it, but horrific creatures bent on inflicting terror also describes pretty much the White House Press Corps; except Helen, of course.

Just catching up, there’s probly a post on this already, but what about that predator drone kill of Al Qaeda #3? (And a good chunk of his family, including children who might have grown up to study at MIT and use our unstoppable math against us.) Go Team!?

@homofascist: Did you survive IML??

So it looks like y’all were busy today. I was wine tasting and toasting the two family members who have died in the past 10 days. I’m a little nervous about who might be next since deaths always come in threes…

@SanFranLefty: 3 is a magic number. There’s always a 3. There always will be a 3. You can kill or coddle, but 3 is just like the Easter Bunny (or Jesus, for those so inclined), always comes back.